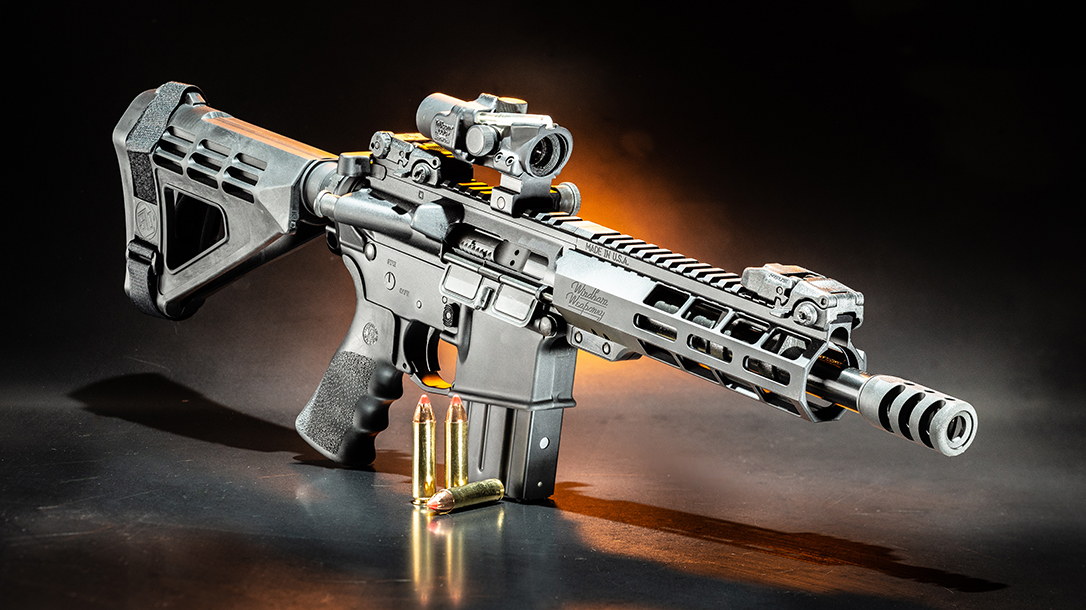 In the 1990s, Colonel Jeff Cooper conceptualized a gun that he called the “Thumper” for infantrymen. It was to be a short and light medium-range carbine that used 20-round magazines and provided more power than either the .45 ACP or .30 Carbine could provide. It needed to be accurate at realistic combat engagement distances with a maximum range of 300 yards. At the time, Cooper opined that the semi-automatic Ruger .44 Magnum Deerslayer was the closest thing to what he envisioned. Today the AR platform chambers the would-be, hard-hitting 450 Thumper.

I recently got my hands on Windham Weaponry’s Thumper in .450 Bushmaster, and it made me wonder what the good colonel would think if he were here to handle and shoot the pistol. Based on the AR-15 platform, the Windham Thumper uses the direct-impingement operating system and features an SB Tactical stabilizing brace at the rear. It’s also short and handy, weighing in at just 5.8 pounds unloaded.

The 9-inch barrel is fitted with a very effective muzzle brake, so the Thumper is incredibly portable and would make an excellent choice for those who need bear protection without carrying a full-sized rifle. Its overall length of 26.25 inches makes it easily stowable in a bush plane or backpack, or instantly accessible when worn with a single-point sling.

If you’re not familiar with the .450 Bushmaster cartridge, let me make some comparative examples. Even with the Thumper’s short barrel, the loads I tested came in at 2,200 foot-pounds of energy (fpe) on average. The .45-70 Government that our great-great-grandfathers used to knock down buffalo generated about 1,300 fpe. That’s a whopping 40-percent more energy out of a semi-auto gun! While the energy level is close to that of the .308 Winchester, the .450 Bushmaster, when loaded with the right projectile, is designed to impart its bone-crushing energy on target rather than drill through it.

As with just about all AR-15s, the Thumper’s receivers are machined from 7075-T6 aircraft-grade aluminum before being hardcoat anodized. Windham outfits the pistol with a free-floating, 7-inch, M-LOK handguard with a full-length Picatinny rail on top. To stabilize the heavy, fat .450 Bushmaster projectiles, the medium-profile barrel has a 1-in-24-inch twist rate. The barrel also has a Melonite QPQ finish and, as I mentioned earlier, is fitted with a compensator. The gas block and tube are both covered by the handguard as well.

Folding Magpul MBUS sights are included along with a POF-USA end cap with a quick-detach sling swivel for use with a single-point sling. The Thumper also uses a Hogue beavertail pistol grip and, as mentioned before, comes equipped with an SB Tactical arm brace. Originally designed to help wounded warriors fire their AR pistols with one arm, this brace is made from a rubbery composite material that provides plenty of rigidity while maintaining a certain amount of flex.

My test sample also had a standard AR trigger with all the creep and overtravel we normally associate with a military-style unit, and it broke with 5.75 pounds of pressure.

On an early spring day, I drove out to my secluded shooting spot in the Sonoran Desert and set up my DOA Shooting Bench. This must-have piece of gear will give you the stability of a cement bench, yet it can still be packed away into just about any SUV. It takes less than two minutes to set up or tear down. I’ve had mine for about two years now, and the convenience it provides has paid for itself many times over.

I also used a Caldwell rifle rest to support the pistol’s handguard on top of the bench. For the accuracy portion of the evaluation, I installed a Trijicon 1.25-4x24mm AccuPoint scope in an American Defense mount. Initially I set up my target at 25 yards to get the scope dialed in. Then, after firing two 3-shot sighting groups, I pushed my target back to 50 yards, where I fired the rest of my groups for record.

I fired five shots for each group, and three groups for each type of ammunition. The best groups show in the accompanying accuracy table. With the scope’s magnification set on 4X, I placed the tip of the reticle’s red chevron on the 2-inch-diameter Shoot-N-C paster while adding the pressure necessary to break the Thumper’s heavy trigger.

The Thumper’s accuracy certainly exceeded my expectations. The average group size for the six different loads was just 1.5 inches. And the single best five-shot group came with Hornady’s 250-grain FTX ammunition and measured just a hair over an inch. Two of Buffalo Bore’s loads produced the most energy—both over 2,500 fpe—which would most assuredly ruin anyone’s or anything’s day if it was unlucky enough to connect with these bullets.

At this point, you’re probably wondering what the Thumper’s recoil was like. I have to admit that it wasn’t as bad as I anticipated. I had brought along a PAST Recoil Shield to protect my arthritic shoulder but, after firing a couple groups, took it off. The SB Tactical brace has a certain amount of give to it and acted almost like a recoil pad. Also, the wide area covered by the end of the brace helps dissipate the impact. Also aiding in reducing recoil is the fact that the Thumper is a gas-operated gun, and the recoil impulse is spread over a longer period, making it feel more like a push than a punch.

The pistol’s compensator is also very effective in reducing muzzle climb. That’s the nicest thing I can say about it. Its ports are angled backwards, and the blast, as you might imagine, is substantial. Over the course of three hours of shooting the Thumper, the muzzle blast blew my notebook and pen, a half-empty box of .450 Bushmaster rounds, the battery compartment on my electronic hearing muffs and the protective acrylic LCD shield on my chronograph’s terminal from the bench. In fact, this happened so many times that I started placing the terminal on my lap while shooting. With this compensator, the muzzle blast is obnoxious, and shooting one of these guns on a public range will make you immediately unpopular with shooters on either side of you.

Windham Weaponry ships the Thumper with one five-round magazine. The .450 Bushmaster cartridges ride in the magazine single-stack style. The magazine body appears to be an unaltered 20-round AR magazine. Meanwhile, a follower redesign provides improved feeding. Hornady’s 250-grain FTX loads fed flawlessly and provided good accuracy and respectable energy. The pistol’s reliability with the hollow-point rounds and flat-nosed bullets wasn’t as good, and if you use the Thumper for protection against dangerous game, you’d be wise to experiment with a variety of loads to ensure 100-percent reliability before putting yourself in a position where your life depends on the gun.

There’s a lot to like about Windham Weaponry’s Thumper. It packs a lot of power into a very portable, light and handy package. Further, it offers the user a degree of protection without being unduly cumbersome to tote. My test sample was accurate beyond belief and reliable with the rounds it preferred.

Like most ARs, the Thumper can be accessorized with anything from ambidextrous safeties to tactical lights and lasers as well as sighting equipment. If rifle-like accuracy from a compact semi-auto that packs a serious punch appeals to you, give the Windham Weaponry Thumper a closer look. For more information, visit windhamweaponry.com.