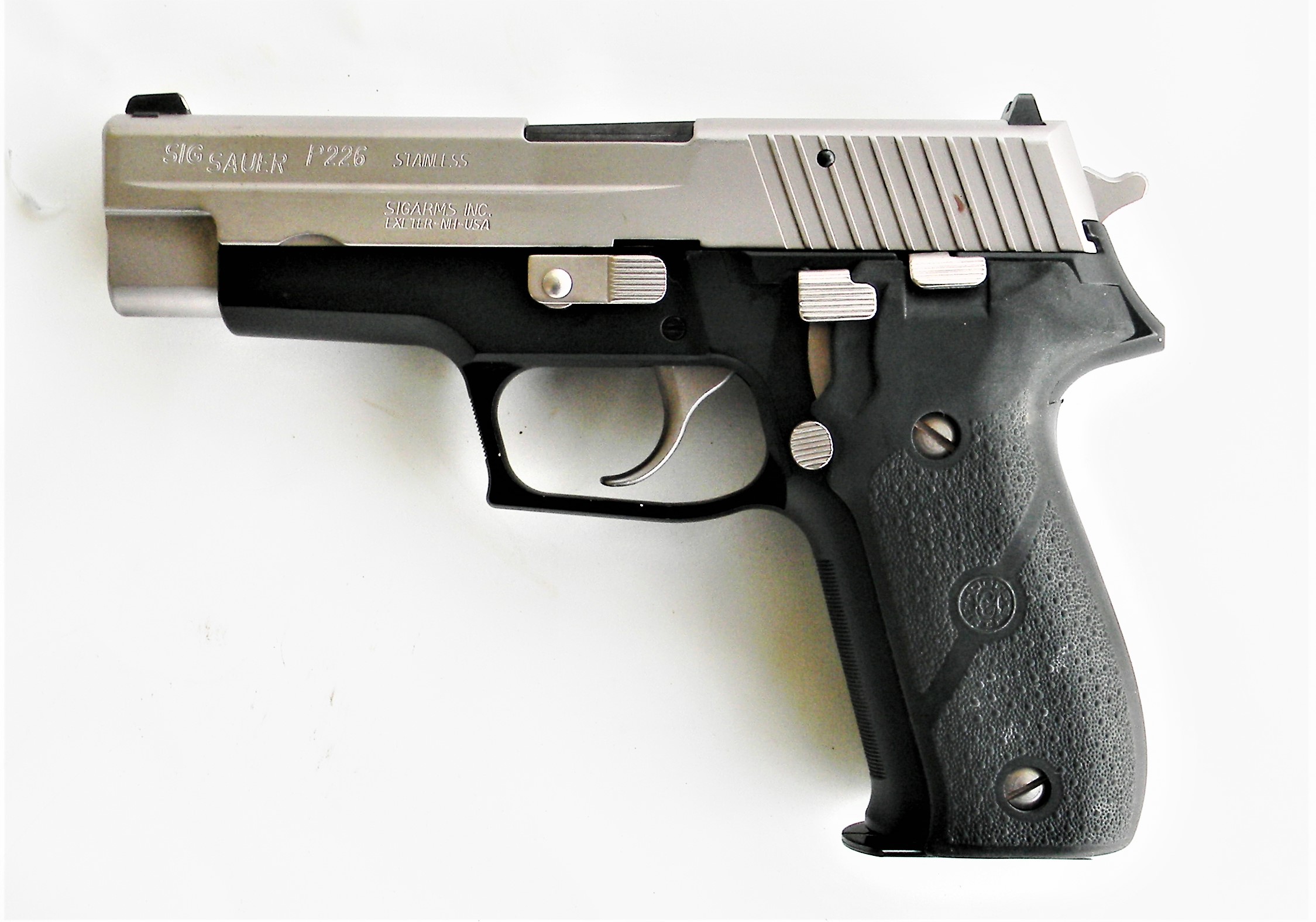 Very few handguns have the awesome reputation for reliability the SIG P226 enjoys. The pistol has seen extensive service in both police and military roles.

The SIG may not be for everyone, but it cannot be faulted on reliability and accuracy potential. The pistol is proven. The P226 was designed for military use and met stringent requirements.

The pistol has been subjected to daunting testing and emerged at the top of the heap.

After 35 years of constant service — more if you count the original P220 — the P226 has emerged from battle and stateside service with an unblemished record.

The pistol illustrated has perhaps 10,000 rounds on the frame, slide and barrel, with several springs and magazines replaced. Most SIG pistols are nitride finished.

This SIG is the highly-desirable stainless steel slide version. The pistol isn’t exactly a compact carry handgun, but with the Galco Stow-N-Go holster, it is possible to conceal the pistol beneath a covering garment.

The pistol is more compact than some service pistols. The barrel is 4.4-inches long and the pistol is 7.7-inches overall, with a 1.5-inch wide slide. Weight is 34 ounces unloaded.

The SIG P226 isn’t light on the hip, but is manageable. It is a fine house gun. The pistol illustrated is chambered for the 9mm Luger. It has been offered in .357 SIG and .40 S&W.

Modern versions feature a light rail. I don’t need a rail for concealed carry. For home defense, it would be good, so the newer handguns are better for most of us, no surprises there.

There is no mechanical safety. There is also a firing-pin block that prevents the firing pin from moving unless the trigger is fully pressed. The double-action trigger and firing-pin block are both safety features.

The only controls are the decocker, slide lock and magazine release. After firing the pistol in single-action fire, the decocker may be pressed to lower the hammer without touching the trigger.

All controls are positive in operation. The firing-pin block keeps the firing pin in place. The firing pin cannot move unless the trigger is pressed completely to the rear.

This is such a good feature that many makers adopted some type of firing-pin block in their handguns in order to remain competitive.

The pistol features a steel block in the aluminum frame that limits wear as the steel slide and barrel contact the frame.

The pistol isn’t perfect, but it is a very good pistol. The P228 is easier to conceal. It is simply a compact P226. The frame may be a bit wide for some hands.

My hands are average so I fitted Hogue grips with good results. It should be noted that some shooters ride the slide lock during firing. The result is a failure of the slide to lock open on the last shot.

The Hogue rubber grips illustrated practically eliminate this problem. The pistol’s DA first shot must be mastered. For some shooters, it takes longer.

If you have the choice, get a SIG with the factory short-reset trigger. This makes for a faster trigger return and much tighter operation.

The Gray Guns unit is first class and rides in my personal P226. I recommend this installation for all SIG P-series pistols.

I broke the SIG and a few Mec-Gar magazines out to familiarize myself with the pistol after a long stay in the gun safe.

Remember to load a few rounds, tap the back of the magazine on a hard surface or boot heel to seat the cartridges, and then finish loading.

This is an aid to reliable function with a double-column pistol magazine. The Horandy XTP is among the most consistently accurate and reliable loadings I have used.

The load is very accurate. The SIG comes on target quickly and with the proper technique, the trigger action is smooth and offers excellent hit probability. The session with the SIG was pleasant.

I also fired a few rounds of a standard handload using the Hornady 124-grain FMJ load and enough Titegroup powder for 1140 fps. This is a well-designed bullet that always feeds well and offers good accuracy.

In the 115-grain XTP, the balance of expansion and penetration is important in personal defense. The Extreme Terminal Performance XTP is among the best choices when wound potential is considered.

At a long 25 yards, firing from a standing barricade position, a five-shot group settled into less than two inches with the FMJ practice load.

This is outstanding accuracy. I have fired smaller groups with the SIG P226.

The pistol is among the most consistently accurate 9mm Luger handguns I have fired.

The SIG P-series are all winners, but the P226 is perhaps the top service pistol in the lineup.

Have you ever shot a SIG P226? Tell us what you thought in the comments section below!