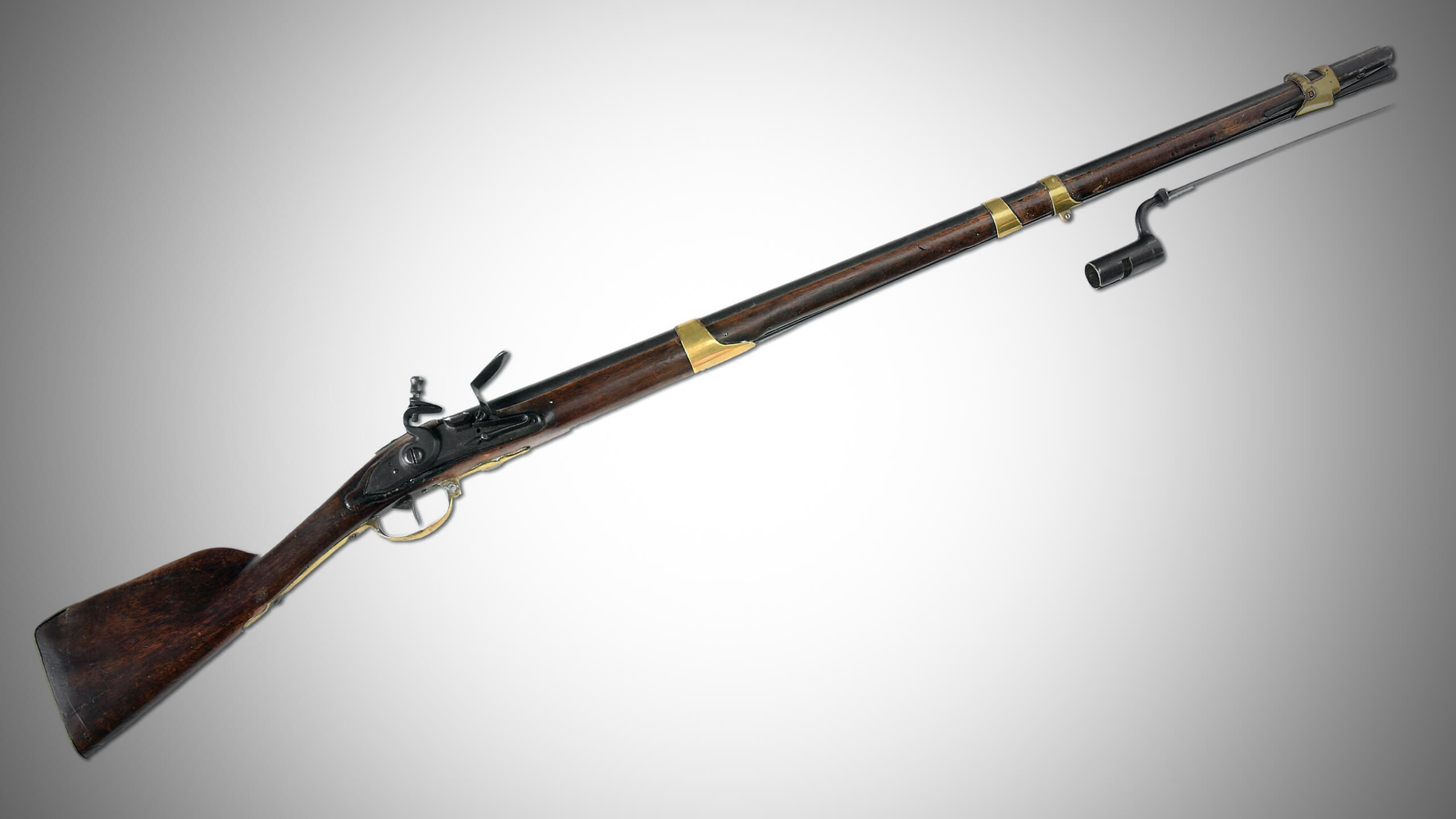 “Don’t fire until you see the whites of their eyes!”

In response to “The Shot Heard ‘round the World” on April 19, 1775 in Concord, Massachusetts, thousands of Colonial militiamen descended upon Boston and, eventually, bottled up the British within the city.

On that hot June morning in 1775, the British crossed Boston Harbor and attacked the American position on Breed’s Hill, which history has erroneously remembered as Bunker Hill.

It was there, while waiting for the attack, that Colonel William Prescott uttered those famous words: “Don’t fire until you see the whites of their eyes!”

Except they weren’t just words; they were an order — sensible and pragmatic — designed to enable the men under his command to most effectively use their limited resources.

The .79 caliber projectiles, which weighed more than an ounce and a half, were devastating — but only if they hit someone. Waiting until the enemy was close enough to see the whites of their eyes would ensure that the rounds fired from their smoothbore muskets hit the intended targets.

One soldier, private John Simpson, failed to heed Prescott’s orders, and fired his Dutch Type III smoothbore musket, resulting in a volley of British fire that was, thankfully, too far away to have been truly effective.

With that one shot, Simpson opened the Battle of Bunker Hill and cemented his place in history.

When the battle ended, the British had taken the ground previously held by the Americans. In that sense, they were victorious, despite suffering more than double the casualties of the Americans.

Prescott’s orders and Simpson’s failure to follow them were not without consequence — and I’m not referring simply to the initial British volley. Instead, Simpson was court-martialed for his actions. The act was more a matter of procedure than punishment, as he went on to serve admirably during the remainder of the war, rising to the rank of major.

Because no one knows for sure who fired “The Shot Heard ‘round the World,” it is impossible to know what gun fired it. Were that information to be known, then that gun — should it still exist — would certainly be the most important arm in all of American history.

Instead, because we do know who fired first at Bunker Hill — and because the gun still exists — it’s my opinion that John Simpson’s .79 caliber Dutch Type III musket is the most important arm in all of American history.

Amazingly enough, that gun was put up for sale for the first time in more than two centuries. It crossed the auction block on Wednesday, October 23, 2019 at Morphy Auctions in Denver, Pennsylvania.

As far back as the reign of Henry VIII, the British had been purchasing arms of one kind or another from what is now the Netherlands. They were inexpensive arms, often bought used, that were kept in storage at the Tower of London, seen as unfit for use by a proper British soldier.

With the outbreak of the French & Indian War, however, these “second-rate” guns were perfect for use by the “second-rate” inhabitants of the American colonies, and so it is with that older conflict some 20 years before that the story of John Simpson’s musket likely begins.

The musket features a 40⅜” tapered round smoothbore barrel inscribed “No. 696” on top, near the breech, and there is a bayonet lug on the bottom near the muzzle. It is equipped with the standard flat banana lockplate, and the walnut stock is of typical early Dutch form with carved teardrops around the lock, sideplate and barrel tang. The comb is high and pronounced in the early Dutch and German fashion.

Even more impressive is that the musket is complete with its original matching numbered bayonet inscribed “G – No. 696″ on the socket. It features a faceted double edged blade 12⅛” long, with an overall length of 16⅝”.

Despite its age, the gun has survived the centuries remarkably well. The barrel and lock have an undisturbed heavy brown patina, and — importantly — the lock is in its original flintlock configuration. The brass furniture has been partially polished and shows some marks from use and darker areas.

The stock shows some scattered marks from use and light areas around brass furniture from polishing, but overall, it retains an original undisturbed surface, and is even complete with the original iron ramrod. The bayonet, too, retains a matching dark heavy patina with some minor period nicks to edges.

Now, to have a pre-Revolution Dutch musket and bayonet in this condition is impressive enough, but to have it tied to such an historic event is even better. Of course, that tie means nothing without the proper provenance to back up the claims, and this musket’s provenance is ironclad. Amazingly, the gun has been in the Simpson family for more than two centuries.

The musket is accompanied by Second Lieutenant John Simpson’s original commission dated March 13th, 1778 from the state of New Hampshire. The appointment is in Captain Simon Marston’s Company in the battalion of troops raised within said state for the Defence of the States of New England & New York commanded by Lieut. Col. Stephen Peabody, Esq. It is signed by E. Thompson and M. Weare and has the pressed seal of New Hampshire.

As if the familial chain of custody weren’t enough, the gun has also been featured in a variety of publications over the years, ranging from “The Granite State Magazine” Volume 11, in 1906, to a seven-page article in “U.S. Martial Arms Collector,” as well as the “Springfield Research Newsletter” Number 160 from September 2019.

The amount of history oozing out of this gun is unprecedented. Not only has it “seen the elephant,” it single-handedly sparked an elephant charge, resulting in the Battle of Bunker Hill.

Now, this is where I need to borrow a line from the world’s most famous professor of archaeology. It isn’t the Cross of Coronado, but I still side with Indiana Jones: “That belongs in a museum!”