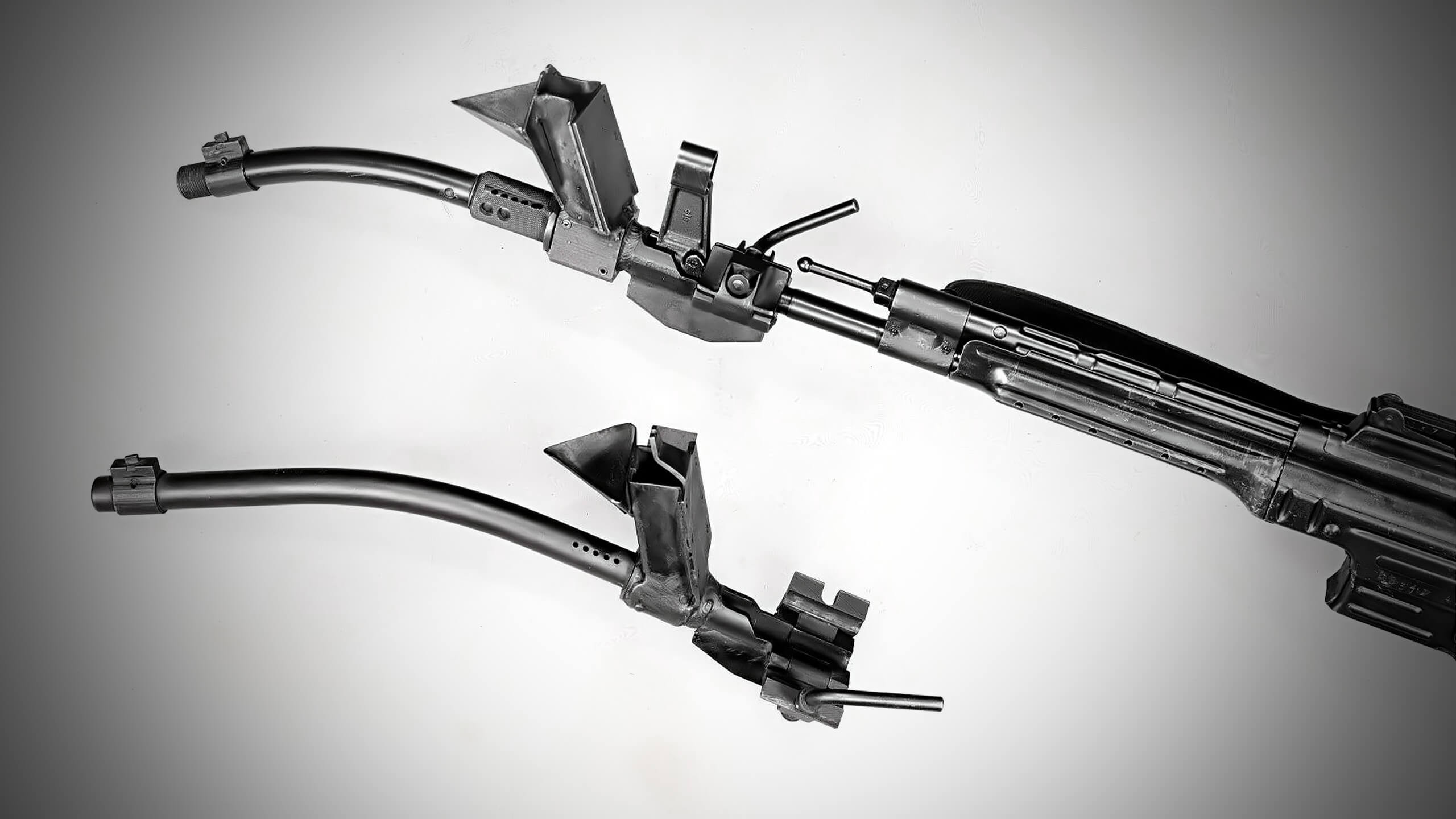 As U.S. forces pushed deeper into Germany in the spring of 1945 near the close of World War II in Europe, more and more of the Nazi’s secret weapons plans were revealed. Some were nothing but rumors of advanced weapons technology, while others were impractical wastes of the Reich’s dwindling time and resources. But some represented remarkable advances in science, like the Arado 234 and Messerschmitt 262 jet aircraft, the V-2 (A4) missile, and the diesel-electric Type XXI U-boats.

U.S. Ordnance “tech intel” teams traveled close to the advancing G.I.s, looking for examples of the latest German small arms. In the war’s closing days, they discovered a unique design intended to shoot at an angle, even up to 90 degrees.

U.S. troops found several examples of a radical firearms design called the “Krummlauf” (bent barrel) fitted to the new German assault rifle — the Sturmgewehr 44 (StG44). While most U.S. Ordnance reports of the era are highly critical of the StG44 (they greatly downgraded the design for its use of stamped parts, rough fit and finish, and particularly disliked its new intermediate cartridge), there was a great deal of American interest in the curious curved barrel attachment.

As for the numbers made, 500 units of the tank mount 90-degree “Versatz P” were reported made and delivered by Rheinmetall-Borsig. Approximately 1,500 sights for the tank device had reportedly been made by Zeiss by the end of January 1945. German plans were to equip every infantryman armed with the StG44 with the 30-degree variant of the Krummlauf.

Using the curved barrel, a German gunner would be at least 20cm below the edge of his foxhole or whatever cover he was using. The Krummlauf was certainly not a “war-winning” weapon, but its widespread use would have aided the German defense, cost more Allied lives, and lengthened the war.

I found some interesting U.S. Ordnance test reports of the Sturmgewehr equipped with the curved barrel extension, and this lets the men who examined the Krummlauf barrel extension speak for themselves. The following excerpts are from an Ordnance report on the weapon, which was carefully examined immediately after the war in Germany ended.

Data and comments on the 30-degree barrel: According the inventor, the Krummlauf has an expected life of 6,000 rounds, but this is greatly doubted. Test firing indicates that the strain on the barrel in diverting the normal straight-line course of the barrel is great, and it is believed that it would enlarge, erode, and pocket, both in the auxiliary throat and in the curved area. All bullets test fired were seriously distorted, and this was verified by interrogation of Major Hartmann.

On test firing the 30-degree barrel, the “jump” or climb was greatly accelerated by the change in the direction of the bullet, but it was not too uncomfortable to shoot. The release of the gas through the auxiliary barrel ports relieved much of the apparent strain on the mechanism.

Data and comments on the 90-degree barrel: Although designed for tank use and fitted with a special interrupted screw thread adapter for quick detachment, the 90-degree barrel has also been found fitted to a standard clamp-on adapter. The model had been nicknamed “the around the corner gun” because it permits firing around a corner at right angles to the shooter.

It was anticipated that this weapon would be difficult to control, and test firing verified these estimates. As the bullet hits the curve in the barrel there is a violent reaction in the opposite direction. There is a combination of normal recoil, a tremendous torque as the rotating bullet undergoes the punishment of taking the new rifling with gas pressure relief, and a vicious sideways recoil. Approximately 150 rounds were fired in testing the weapon. Single shots and burst fire were tried, and, despite the attempts of several shooters to hold the weapon rigidly at the hip, more than three shots in automatic fire proved dangerous as shooter and weapon were spun almost 90 degrees. Firing tests into sawdust produced more fragments than intact bullets.

Sight: Reportedly developed by Busch (at Rathenow), it is a 1.5x unit, with a 12-degree field of vision, mounted in the hemisphere to be coaxial with the sight axis of the gun. It appears that some 90-degree barrel extensions were modified for experimental infantry use in the last months of the war. The modification consisted of omitting the threading at the rear end of the barrel extension. The curved barrel is then pinned to a modified grenade launcher clamp coupling.

Summary and Recommendations: Despite the fact that the bent-barrel theory is in violation of accepted ideas on bullet delivery, it is believed to be worthy of extensive research and development. With the short length, large diameter, and short bearing of the 230-grain U.S. Caliber .45 bullet, various degrees of bent barrels might prove to be successful, and with reasonable control. With the 7.9mm Kurzpatronen bullet, it is believed that the 30-degree bend is practical. The 90-degree bend is apparently impractical.—Colonel H.A. Quinn

It seems that U.S. Ordnance took Colonel Quinn’s recommendation to heart. After the war, some curved barrels were created for the .45 caliber M3A1 (Grease Gun) submachine gun. Later, some commercial experiments were also conducted with curved barrels for the M1 Carbine (.30 Carbine). Apparently, the test results were not satisfactory. America, after victory in World War II, could not accept the middling results of a curved barrel project as Nazi Germany had been forced to do in her final days.

The curved barrel is an interesting idea, and U.S. Ordnance pursued it long enough to realize that the notion was more gimmickry than solid firearms science. Can a firearm be made to shoot around a corner? Ultimately the answer is yes, with the weighty qualification that the modification will not work particularly well or last very long. In the final equation, the Krummlauf and related projects weren’t practical. But, they certainly were interesting!