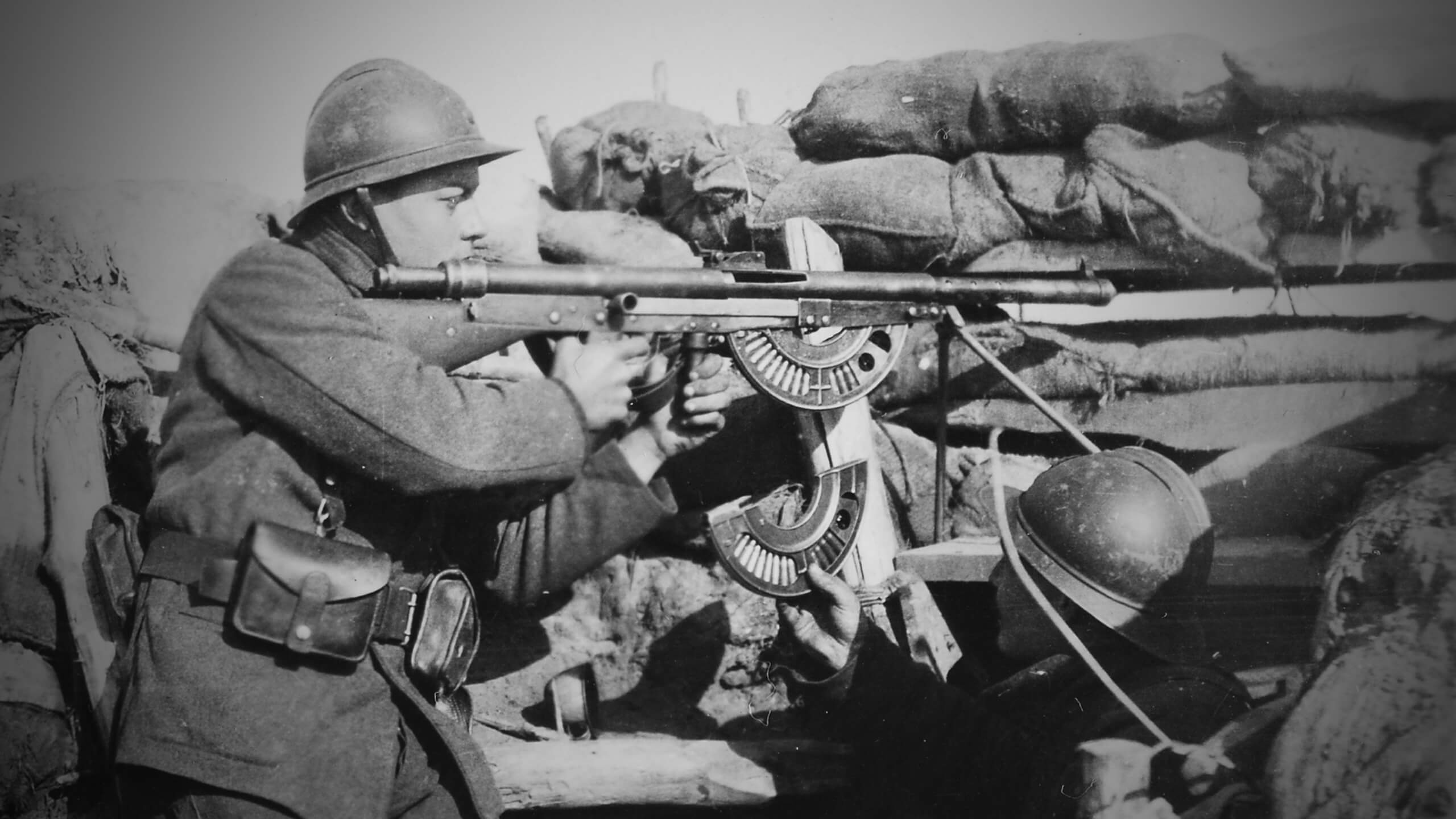 The 2001 made-for-television World War I movie The Lost Battalion has a brief segment where two veteran U.S. soldiers offer insight to a group of newly arrived “Doughboys” on the French Chauchat machine gun, and it is summed up as “it is a piece of garbage.”

Those sentiments are shared by many firearms enthusiasts today.

Ask the question, “what is the worst machine gun ever produced,” and the answer will invariably be the “Chauchat.” Ask the follow-up question “what made it the worst,” and the answers may vary. Typically this will range from “it had an open magazine that jammed” to the dubious “it got a lot of American Doughboys killed.”

In fairness, and with absolute respect for those American soldiers who were killed in World War I, it was mostly German bullets, artillery and sadly Spanish Flu that was responsible, not a French firearm. The argument that the weapon jammed and put soldiers in harm’s way is simply overstated — and the truth is that in the mud-soaked trenches, a lot of weapons jammed.

Origins of the Chauchat

What is often overlooked about the Chauchat is that it was quite innovative for its time. The nations of Europe were largely adopting Maxim-style heavy machine guns that were water-cooled, belt-fed and —at the time — mounted on heavy tripods. These machine guns were excellent for static defense and are a major contributing factor as to why the armies of Europe had “dug in” during the fall of 1914, creating the hellish trenches that became almost synonymous with the First World War.

Yet, more than a decade before the war broke out, French Arms Designer Louis Chauchat saw the potential for a light machine gun or automatic rifle that could be carried by a single “Poilu” (French infantryman). Chauchat envisioned a weapon that could provide what we would later describe as “walking fire” and allow a soldier to advance with the firepower that was unavailable with the bolt-action rifles of the era.

It should be noted that the French military’s new Berthier Fusil Mle1 1907/15 bolt action rifle held just three rounds, so the idea of giving soldiers an automatic weapon that could hold 20 rounds was quite revolutionary. It was also too forward thinking for the French government, which truly did everything by committee. Much of that explains why the French Army marched off to war in the late summer and early fall of 1914 looking little different than they had during the Franco-Prussian War in 1870.

As the casualties mounted and it became apparent that something more than bolt-action rifles was needed to help break the German lines (to see how the Americans attempted to address this with the Pedersen Device for the Springfield M1903 rifle, click here), in early 1915 there was renewed interest in what would become the Fusil Mitrailleur Modele 1915 CSRG – otherwise known as the Chauchat.

The weapon was rushed into production and, because of the wartime economy, it was manufactured at two reconverted civilian plants: “Gladiator” and “Sidarme.” It would be apt to suggest that the Chauchat is akin to the ultimate metaphor for French tactics throughout the First World War — rush forward without really considering how to improve the plan or tactics once committed.

It is fair to say that the weapon was crude, the materials were not to the highest standards and it was not what could be described as an “attractive weapon.” However, all of those points could be also applied to the late-war or “last ditch” weapons employed a generation later by Nazi Germany or Imperial Japan.

Critics of the Chauchat almost always disregard its merits. Unlike the Maxim-style machine guns, which were primarily defensive weapons, the Chauchat was designed from the ground up as one of the first truly offensive automatic weapons. Even the Danish-designed Madsen was designed for static defense not forward movement.

Moreover, while the Imperial German army adapted its MG08 Maxim for offensive use by adding a bipod, pistol grip and side-mounted drum magazine to hold a belt of 100 rounds, it still wasn’t exactly mobile. The MG08/15 still weighed around 60 lbs. compared to the 20 lbs. of the French light machine gun. By contrast, the Chauchat was a weapon that a single Pouli could carry and operate. Unlike almost every other weapon of the era, it was selective fire and offered both automatic and semi-automatic modes.

While the Chauchat featured a fixed bipod, which did allow it to be used in a defensive capacity, it was designed as an offensive weapon and it was one of the first automatic weapons to feature a pistol grip with in-line stock. It utilized a detachable magazine and could be fired from the hip while moving, making it highly adaptable.

Given all of the above points, we come back to the fact that it has still earned the most dubious distinction of being the worst machine gun of all time. The biggest issue is that it featured an open magazine that let in dirt and grime, which caused jamming issues.

No doubt that was a serious problem — but as noted, a lot of guns jammed in the squalid conditions of the trenches. And a lot of magazines had a similar problem. The bigger issue is that American soldiers didn’t like it — but with good reason.

First, there was that fact that the first Fusil Mitrailleur Modele 1915 CSRGs issued to the arriving Doughboys had been in service for at least a year or two. Those guns had been used and abused and no soldier likes to have to rely on equipment that has seen its share of action, particularly at the hands of another soldier.

In total, some 16,000 Chauchats were issued to American troops that were chambered in the French 8mm Lebel, but the U.S. military wanted to standardize its ammunition. In response, the French accommodated by producing another 19,000 Chauchats chambered for the American .30-06 round used in the Springfield 1903 rifles. This is likely the root of much of the weapon’s bad reputation. Tests over the years, including some that were conducted as recently as 1994, did show that the weapon had an extraction problem with the American cartridge — likely caused by incorrect chamber measurements and substandard manufacturing.

Then there is the issue of politics.

While the Doughboys seemed ready and able to step up and fight the Hun, they didn’t like using foreign equipment. This was notable in the case of small arms as there were two firearms that were superior to the Chauchat.

One was the Lewis Gun, which was designed by U.S. Army Colonel Isaac Newton Lewis. He had serious “differences” with General William Crozier, chief of the Ordnance Department, and after being frustrated to the point that he was “slapped by rejections from ignorant hacks,” Colonel Lewis resigned his commission and took his design to Europe. The British adopted the Lewis Gun and it was widely employed to great success.

American units that had used it, including the members of the United States Marines Corps that headed to the Argonne Forest, had to turn in their Lewis Guns — the weapon they had been trained on — in favor of the French weapon that few had seen and most couldn’t pronounce!

The second weapon that was relegated to the side in favor of the Chauchat was the M1918 Browning Automatic Rifle (BAR). It has been widely established that General Pershing, commander of the American forces, had been holding back widespread adoption of the BAR until victory seemed certain, for fears that the BAR would be copied by the Germans. No doubt that fact resulted in resentment among the U.S. troops issued with the Chauchat.

In total, more than 100,000 Chauchats were produced during the war, and while the French military removed it from service after the war the weapon was used by a number of allied nations to good success during the war and after. The light machine gun saw use by the Russians during World War I and then by both the Red and White forces in the Russian Civil War, as well as by the Polish Republic and its Blue Army. The Imperial German Army used a number of captured Chauchats, which should be a testament to it not being so bad even the enemy won’t use it!

There are even reports that some may have been used by the French forces in IndoChina and later by the Viet Minh in the Far East.

Finally, given the influence that the Chauchat design had on later light machine guns, rather than “worst” it would be far more fair to describe it as one extremely ahead of its time, albeit one not without its share of problems.

The Chauchat in Popular Culture

The Chauchat hasn’t been seen in all that many movies, and most American viewers may only know it from the 2001 A&E TV movie The Lost Battalion, wielded by American soldiers who declared it to be a “piece of garbage.”

Interestingly, the firearm wasn’t even seen in a move until it appeared in the 1937 Soviet-made film Za Sovetskuyu Rodinu (“For the Soviet Motherland”), which was released under the American title Ski Battalion. It depicts the now largely forgotten Soviet-Finnish conflict of 1921-22, and the guns used in the film were likely actual Chauchats provided to the Russian Imperial Army, which were captured/obtained by the Red Army and likely saw service in that war!

It wasn’t even until the 1991 French made World War I film Capitaine Conan that the machine gun was seen in a truly western-produced film. More recently it could be seen in the film A Very Long Engagement, the 2004 French love story set during the First World War. It can also be seen in the direct-to-Amazon film The Great War. However, the machine gun gets far better treatment in several “first person shooter” video games including Verdun and Battlefield 1, where it can be used by the player. Based on the opinion of gamers who use it in those games, it is far from the worst gun!