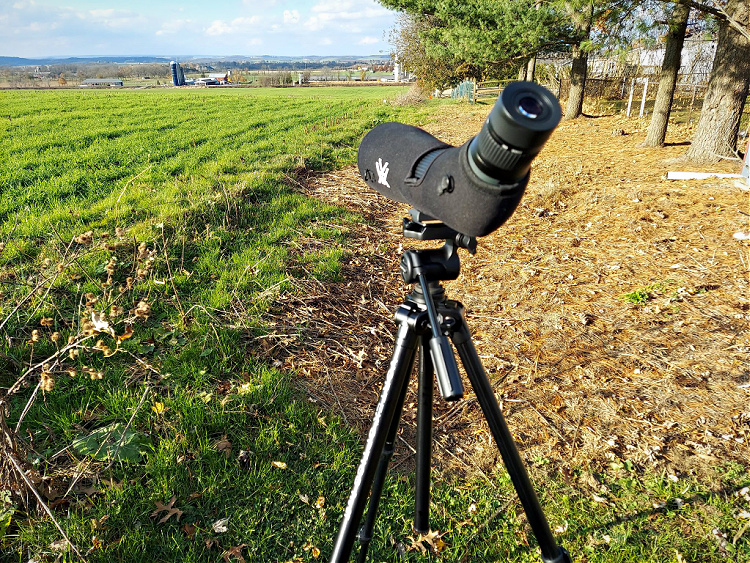 Recently, I received a Vortex Viper HD 20-60x spotting scope for evaluation, so I promptly took it to the range and fields behind my house to put it through its paces.

This optic has a magnification range starting at 20x and going up to 60x, with an objective lens of 85mm. The linear
view at 1,000 yards is 101-50 feet. The length is 17.5 inches and the weight is 76.6 ounces. Upon picking this scope up, you can immediately tell that it is solidly built, not flimsy at all. Fit and finish are excellent. 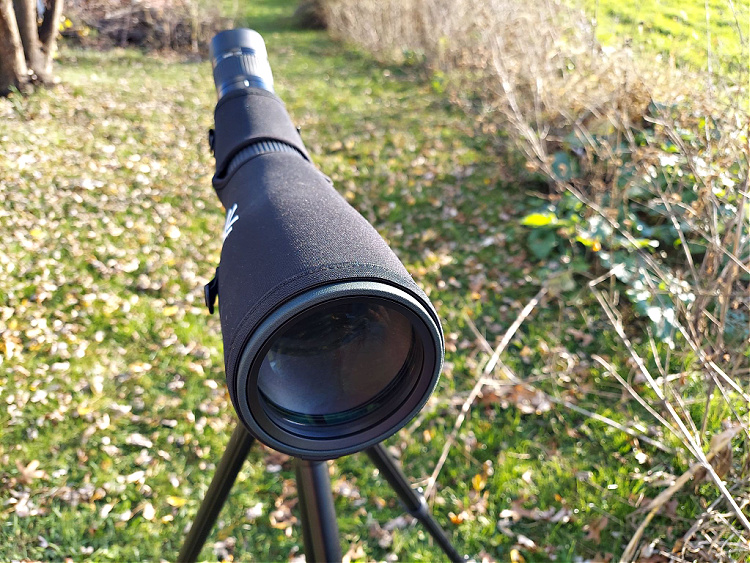 The 85mm objective lens works well for light transmission and the optics are extremely clear.

The multi-coated lenses are waterproof and fog-proof (they use Argon gas purging), which is pretty much the standard with optics these days.

A hard, rubber-like treatment covers the body of the spotting scope for protection. Each component (body and eyepiece)
comes with lens covers and protective cases.

The tripod (a separate accessory) comes with a case and shoulder strap. 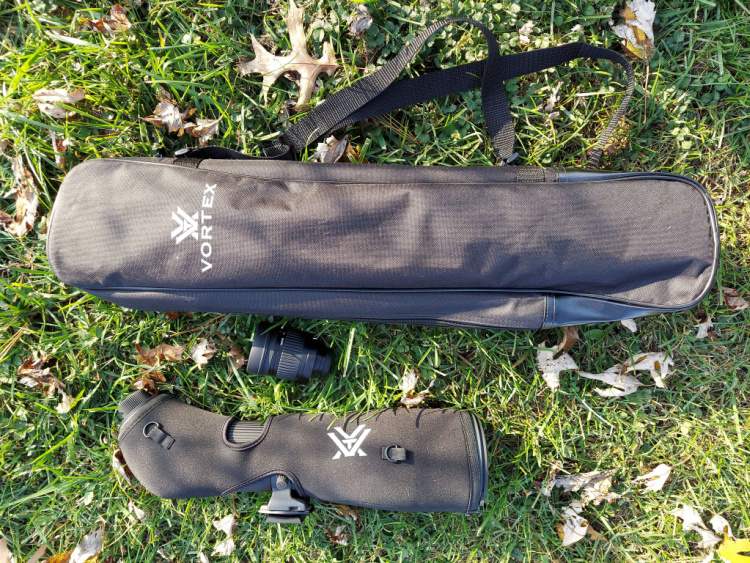 At the top of this image, you see the tripod in the case. The eyepiece is in the middle, and the spotting scope with padded cover is at the bottom. 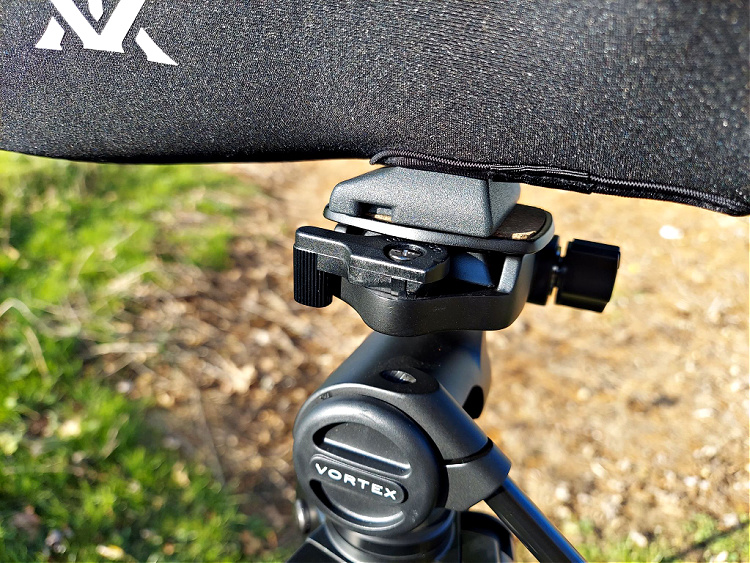 The mount on the scope attaches to the tripod via a quick-release lever. Very convenient!

At the end of the objective lens is a built-in, retractable sunshade that is a very nice touch. I didn’t even know it was there until I read about it!

The eyepiece attaches to the body of the scope by inserting it and turning it, at which time the locking lugs engage, securing the eyepiece into the scope. The fit is very positive and tight. Another helpful feature is that the eyepiece has an adjustable eyecup so that even if you wear eyeglasses, you can use the scope.

Focusing is done via a large, ribbed ring that encompasses the entire body of the scope. The focus ring operates smoothly,
as does the eyepiece that adjusts the power of magnification. There is just enough resistance to make adjustments deliberate and yet easy and smooth. 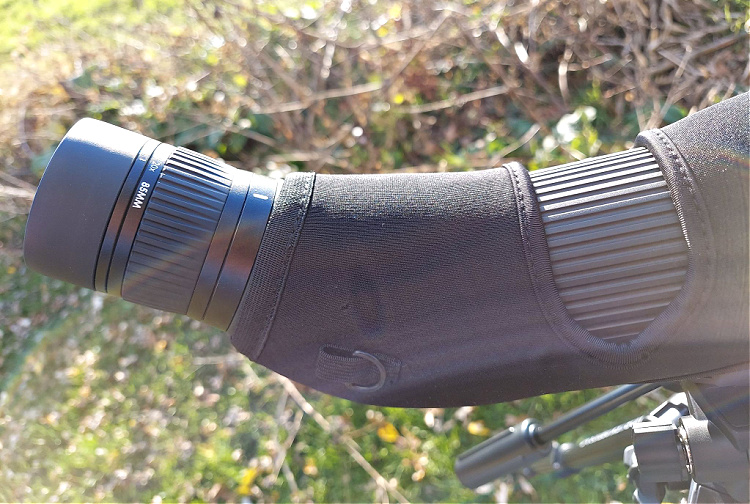 The protective cover is nice. To the right, the ribbed focus adjustment ring can be seen.

At the range, the scope made it very easy to spot hits on targets at 100 yards, and will no doubt allow that at greater
ranges.

From my vantage point at the edge of a farm field, I could see various houses and farms ranging from about 1,100 yards
away up to several miles.

The farms in the background are over 1,000 yards away. 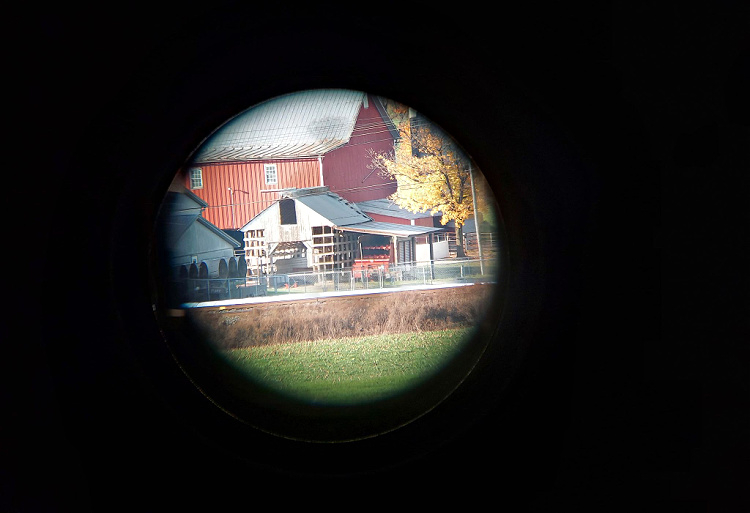 The same farm at 20x. It’s difficult to show the clarity with a camera through the scope, but it is excellent!

I was shocked at how clear the image of the scope was! The Vortex Viper is an outstanding optic, to say the least. Looking at the closer farms, I was able to see details such as cows in the barns and other small items very easily.

The more the power is turned up, the more that atmospheric conditions, such as mirage and air moisture, come into play. It was a fairly humid day, so the air clarity became a factor. Even so, the clarity of the scope is stellar, especially at the lower powers.

I zoomed in on houses that were several miles away, nearly invisible to the naked eye. At 60x, I could easily spot people walking around, along with other details.

Obviously, at the lower power setting of 20x, the scope had the most light-gathering ability. It was easiest to search for objects at the lower setting. Once an object was found, cranking up the power allowed for a more detailed investigation.

All in all, this scope would be an extraordinary addition to your range kit or observational abilities. It’s also fun
to check out the moon and other celestial objects with spotting scopes if you’ve never tried it; you’ll be amazed at the details you will be able to see!

The retail on the Vortex Viper spotting scope is listed as $1,349.99, which is not as costly as many of the other, higher-end spotting scopes that are on the market. Considering what the buyer gets for the money, I believe it is a very reasonable price, given the high-quality images and sturdy construction that Vortex has poured into this optic.

All in all, this optic gets two thumbs up!

Buy your magazines at GunMag Warehouse!

Be sure to watch GunMag TV too.

Jim Davis served in the PA Dept. of Corrections for 16 ½ years as a corrections officer in the State Correctional Institute at Graterford and later at SCI Phoenix. He served on the Corrections Emergency Response Team (CERT), several of those years as a sniper, and also the Fire Emergency Response Team (FERT). For 25 years, he was a professional instructor, teaching topics including Defensive Tactics, Riot Control and Tactical Operations, Immediate Responder, and cognitive programs as an adjunct instructor at the DOC Training Academy. He was then promoted to the title of corrections counselor, where he ran a caseload and facilitated cognitive therapy classes to inmates. His total service time was close to 29 years. He was involved in many violent encounters on duty, including incidents of fatalities.