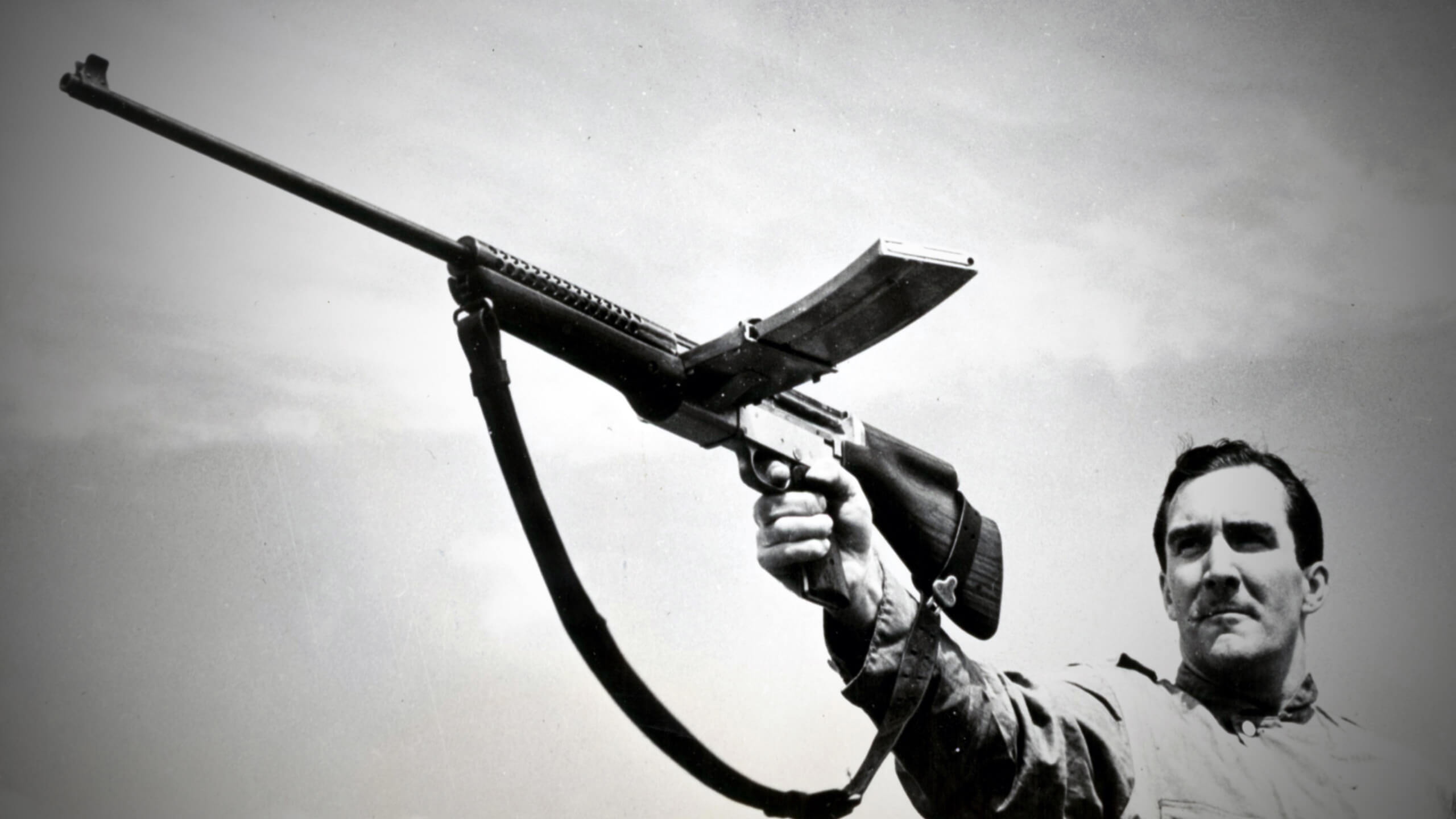 Despite watching from the sidelines for more than two years, America was surprisingly unprepared for the war that came on December 7, 1941. That is however, with the notable exception of U.S. small arms. Compared to any other combatant nation, American infantry weapons represented an embarrassment of riches. Even some of our firearms kept in reserve were the envy of lesser military forces. Americans quickly came to expect nothing but the best from the Arsenal of Democracy.

By 1941, an innovative and unique arms designer named Melvin M. Johnson had created a pair of .30 caliber firearms that challenged two established arms in the U.S. inventory: his Model of 1941 semi-automatic rifle became a competitor to John C. Garands’ M1 Garand, and his M1941 Light Machine Gun was provided as an alternative to John Moses Browning’s BAR (Browning Automatic Rifle).

Radical, innovative and different, the Johnson Rifle made enough inroads to spark debate in Congress, followed by an official Ordnance Department test, and then a shoot-off before a crowd of senior political and military officials. Ultimately the Johnson rifle was officially rejected by U.S. Ordnance after being a part of “one of the greatest military squabbles in US history” (at least as defined by the editors of Life magazine).

Even so, Johnson kept at it. His M1941 Rifle found some interest from the government of the Dutch East Indies, and an order for 70,000 rifles (chambered in U.S. .30-06) was received in 1941. Only a few thousand of these rifles had been delivered to the Dutch before the Japanese attacked and took over the islands beginning on December 8, 1941.

In the dark, early days of World War II, the United States Marine Corps was in need of modern semi-auto rifles (the M1 Garand was being delivered to the U.S. Army as first priority, so the Marines were getting a lot of M1903 bolt-action rifles), and so they turned to the remaining M1941 Johnson rifles from the Dutch contract to equip their new Marine First Parachute Battalion.

The Marines noted the Johnson rifle’s easily detachable barrel as their prime reason for selecting the weapon for their “Para-Marines.”  Some of the Johnson rifles did see action in the hands of Para-Marines (who never made any combat jumps) during the campaign in the Solomon Islands. Reports of their use in service are few, but the Leathernecks seem to have approved of the weapon. However, by late 1943, the few Johnson rifles in service were replaced by the M1 Garand.

The Right Place and Time

Melvin Johnson had a second design that also saw service with the Marine Corps during the Solomon Islands campaign: the M1941 Light Machine Gun (LMG). While it was given the moniker of “light machine gun,” the weapon was really an automatic rifle much like the BAR. Unlike the BAR, it was particularly light — without its 20-round magazine, the M1941 Johnson LMG weighed just 12.3 lbs. (compared to the M1918A2 BAR’s 19+ lbs.).

One of Melvin Johnson’s favorite demonstration tricks was to fire the M1941 on full auto with just one hand. Compared with the BAR, the Marines appreciated its light weight and accuracy while still firing the powerful .30-06 round.

As with the Johnson rifle, the barrel on the M1941 LMG could be easily replaced. Compared to the fixed barrel of the BAR, this allowed the Johnson LMG much better performance in the sustained-fire role. Another interesting feature of the M1941 LMG was the adjustable cyclic rate, which varied from 300 to 900 rounds per minute. The small number of Johnson LMGs issued to specialized Marine units, like the Para-Marines and Marine Raiders, were used into 1943. Again, Marine reports on the weapons are few, but the Johnson Light Machine Gun was held in high regard by the Leathernecks who used it.

The weapon as described in W.H.B. Smith’s original (1943) Small Arms of the World:

This weapon may be fired from either an open or closed bolt. Used as a semi-automatic weapon for accurate fire the bolt is closed to prevent disturbing the aim by movement of the heavy parts going forward. Turning the change lever on the Johnson to the forward or semi-automatic position, allows the bolt to go forward and lock without firing a cartridge. When the trigger is pulled, one cartridge is fired, and the gun is cocked, and the bolt is closed and ready for the next shot.

When firing automatically, the bolt should be open to permit air circulation and prevent a cartridge in the firing chamber to be cooked-off by barrel heat during suspension of fire. This is achieved in the Johnson by setting the change lever back at the automatic position. The bolt will stay open in this position and will go forward to fire the cartridge when the trigger is pressed. The gun will continue to function until the trigger is released or the magazine is empty.

In early 1942, U.S. and Canadian forces contributed troops to create a new commando unit designed to fight behind German lines in cold weather conditions, as well as to be a potential advanced force for the proposed Allied invasion of Europe through Norway. This joint U.S./Canadian unit was called The First Special Service Force (or “1SSF”), often known as The Devil’s Brigade.

The early days of the 1SSF were lean on supplies and particularly harsh in their training. Over time the unit began to receive unique and specialized equipment to fit their mission. One of these items was the Johnson M1941 LMG.

The 1SSF was originally deployed in the campaign to take back the Aleutian Islands from the Japanese. When the Devil’s Brigade reached Kiska on August 15, 1943, the Japanese had already pulled out. Shortly after the 1SSF returned to the United States, their primary mission to attack Norwegian targets (Project Plough) was cancelled. By November 1943, the 1SSF had been diverted to Italy, and went into the line along with the US 36th Infantry Division.

On December 1st, the Devil’s Brigade made a daring climb up Monte La Difensa to surprise and overwhelm the German defenders of this critical position. 1SSF made several more mountain assaults until January 8, 1944, until the breakthrough in the mountain campaign had been achieved. Through this time the “Johnny Gun,” as the Forcemen called the Johnson M1941, proved invaluable with its light weight and high firepower.

Next, the Devil’s Brigade carried their Johnny Guns to the Anzio beachhead, where the unit shocked the German defenders with their hard-hitting commando tactics until the Allied breakout in August 1944. After that the 1SSF moved on to the invasion of Southern France, fighting until they were disbanded on December 5, 1944. The 1SSF men were distributed throughout various U.S. and Canadian airborne, ranger and infantry units. Their beloved Johnny Guns were lost to history.

While 1SSF troops and the men of the special Marine units that received the M1941 Johnson generally liked the gun, and often made quite good use of it, the M1941 was not a standard-issue weapon. Consequently, there never was a magazine pouch or carrier designed for it, and this was a regular complaint from the troops using it in combat. The long, curved 20-round magazines were awkward. The tall front sight was prone to snag on the surrounding brush or jungle growth. The Johnson LMG’s light construction made it easier to carry, but its durability (particularly compared to the BAR) was often brought into question.

In the end, the Johnson never quite found its niche. Too good and too well-liked to be dismissed as an “oddity,” but not established enough to mass-produce and become standard issue left both the Johnson rifle and light machine gun idling in a curious state of “neutral.” However, their legacy and accomplishments are beyond question — even if they appear to have been lost to history.