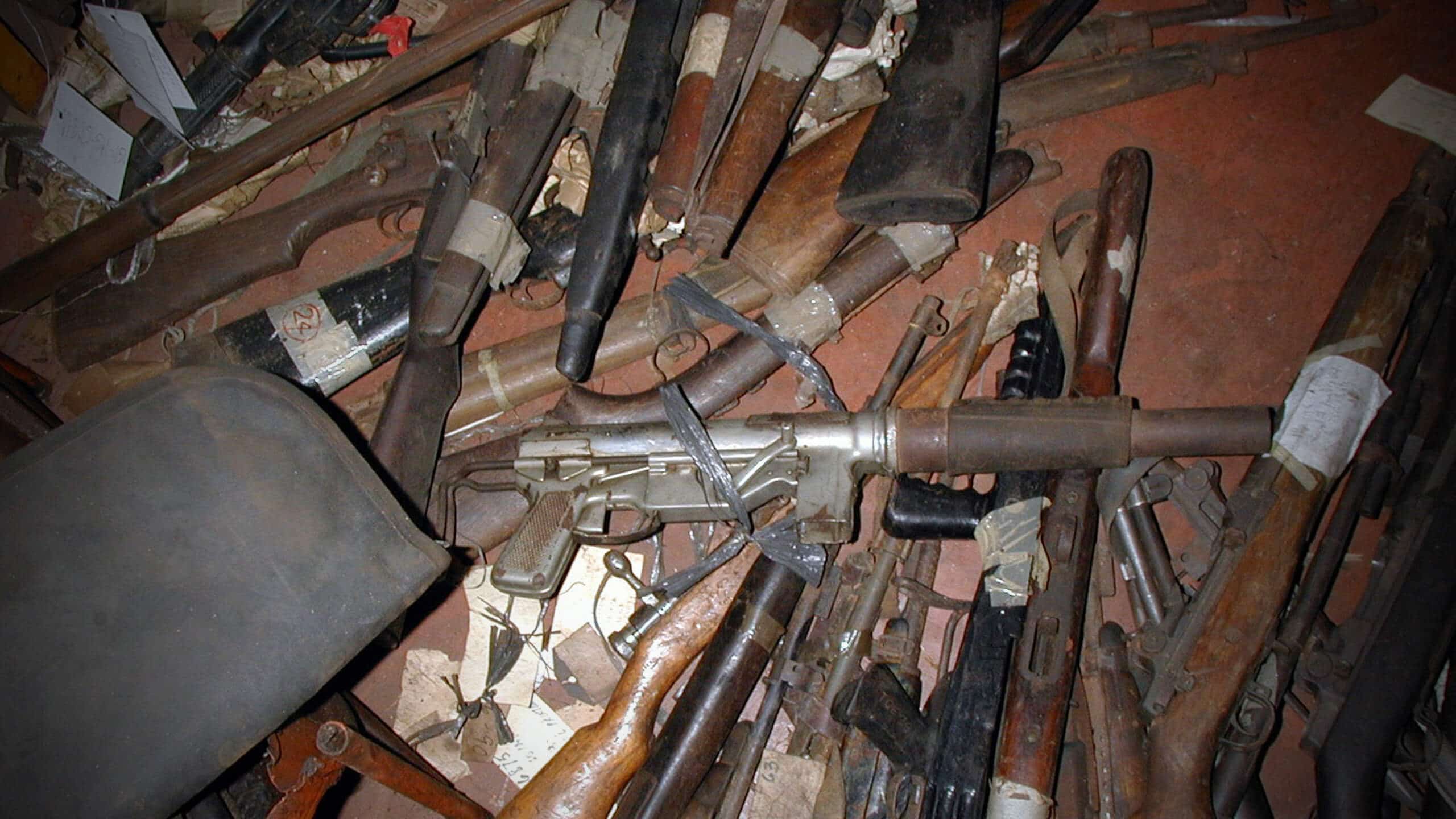 Back in the early 2000s, I got to be a small part of an adventure in the Philippines that most military collectors can only dream of. From a financial standpoint, it was a failure for the companies involved as nothing was ever exported. However, the fascinating chance to look through the confiscated firearms collected by the Philippine National Police (PNP) over the previous decades, and the insight into how Third World arms deals are made, or in this case not made, was worth the effort.

My visit to the PNP warehouse, a big deteriorating one-story concrete structure open to the weather from many broken windows, was a surreal experience. As a whole, it was very dirty, shockingly disarrayed and poorly lit. Some rooms had wooden racks, but most simply had the long guns stacked horizontally in great piles on the floor, when they were not just strewn around ground intermixed with beat up wooden and cardboard boxes of every description filled with handguns, and sometimes ammunition.

It was a wild mixture of military and civilian guns ranging from decrepit 1873 Colt six-shooters from the Spanish American War to FAL rifles. There was even a rusty coat hanger with six extremely rare FP-45 Liberator pistols strung on it hanging on a peg. Most of the guns were filthy and rusty from neglect.

Whatever the duties of the warehousemen were, it did not include oiling the weapons. The tropical humidity, as well as the rainwater that came in unobstructed through the broken windows had taken its toll. There were a few anomalies: four brand new IMI UZI submachine guns new in their boxes seemed out of place.

The inspection now took on the aspect of a treasure hunt. There were thousands of guns in here, and maybe 10 percent of them were rare, decent or collectable enough to be worth importing, even if just for parts. About half of the inventory was World War II-era U.S. or Japanese military firearms, which we were told was captured from the National Peoples Army (NPA), a communist insurgent group that is still active in the islands. Some of these rifles sported odd 15- or 20-round box magazines, apparently having been modified in the NPA’s jungle workshops.

We searched the piles and boxes amid bright shafts of sunlight that filtered in from steel-meshed windows and cut up the semi-darkness with small checkerboards. Some gems hid in the shadows; a stack of military 50-round Thompson submachine gun drums, an OSS silenced M3 Grease Gun, and massive tripods for Japanese Type 3 heavy machine guns.

One room had pump shotguns piled higher than my head against a back wall next to a waist-high pile with lots of Browning Automatic Rifles (BAR) and M3 submachine guns (Grease Guns) mingled in among various World War II American-made riot guns.

Other piles had M1917 Enfields, M1903 Springfields, M1 and M2 Carbines, Garands, and more Grease Guns and BARs. There were also a couple hundred vintage commercial and foreign military long guns and handguns with potential value for parts, if nothing else. I saw early Colt New Service .45s, M1911s, M1903 pocket pistols, Police Positives, S&W M&P .38s, M1910 Savages and nearly every imaginable pre-war European autoloader from the C96 Mauser to the Walther P.38 as well as all the Japanese Nambu’s one could hope to encounter. Unfortunately, the junk far outnumbered the gems, and the majority of this stockpile was so poor it was debatable if it was worth the trouble of salvaging parts from them. And this was supposed to be their “good stuff”!

After a few sweaty hours in the stuffy warehouse, we moved outdoors to inspect the confiscated weapons deemed unworthy of storing under a roof. Three 40” sea-land containers were positioned along a concrete dock which the warehousemen opened for us before taking shelter in the shade.

Pistols poured onto the ground in front of the first container when its door swung open. Most were very soft steel, smoothbore, Philippine-made copies of American revolvers showing differing levels of fabricating expertise. I used one as a hammer and the grip frame bent after a few blows. Later I was told these weapons were clandestinely made in jungle workshops for extra-legal purposes. Other than as a novelty, they were commercially worthless as firearms, and probably of highly questionable safety.

The other two containers were stacked to the roof with rusty long guns. In the bright light of day, it was easy to see the contents. The long guns were mostly World War II military models apparently no worse than those inside. There were a lot more Japanese Arisaka rifles here than inside, and there were a lot of Japanese light and heavy machine guns which could be broken down for valuable parts.

The warehouse was uncomfortable, but working in the containers cooking all day in the sun was worse and we were quickly soaked to the skin. It was here that the real treasures unexpectedly lay. I dug in and pulled out Arisaka sniper rifles, multiple variations of the Nambu light machineguns, a few rare Japanese copies of the Lewis light machine gun and at least five of the massive finned barrel Type 3 heavy machineguns guns I’d already discovered the tripods for inside.

<img ” class=”logo-tal-icon” src=”https://www.thearmorylife.com/wp-content/themes/thearmorylife/img/logo-tal-icon.svg” alt=””/>Live The Armory Life. The latest content straight to your inbox plus an automatic entry to each of our monthly gun giveaways!

Most of the guns were rusty, but strangely there were fine examples in the grease incongruously mixed it. My favorite discoveries were a mint M1928 Thompson and M3 submachine gun in dirt caked cosmoline. We found the best Nambu pistols here too, almost all missing their fragile grips, but with heavy grease protecting their blued finish.

As I was pulling guns from the hot containers to examine in the sunlight, I was struck by a very strong sense of history. The early 1903 Springfields, 1918 BARs and M1928 Thompsons had probably been in the hands of American and Filipino soldiers as they made their fighting withdrawal down the Bataan Peninsula in 1942.

In effect, these guns had never left the battlefield. What has since become of them, I do not know. But, I was happy to have at least had a chance to see them. Who knows what other treasures are still out there?