ARs have been the must-have shooting sports platform for decades with the minor exception of the stretch of time during former President Bill Clinton’s ban (who are we kidding, they were popular then, too). They didn’t exactly launch into overnight popularity, though. Almost three-quarters of a century has passed since the AR-15 became a thing and it’s really only been in somewhat recent years we’ve seen a major increase in caliber varieties and features. Among those varieties is the .350 Legend, a cartridge introduced by Winchester in 2019 and now offered in a solid rifle by Rock River Arms. Read on to find out how the RRA 350 Legend performs at the range and in the field.

The RRA LAR-15M 350 Legend is a durable, solidly-built rifle for gun owners looking for their next self-defense AR or for their newest hunting gun. Photo: Kat Ainsworth Stevens.

Winchester officially launched the 350 Legend at SHOT Show 2019 under the banner “Straight-Up Legendary.” It’s a straight-walled cartridge that gives hunters more wiggle room in states where straight-walled cartridges are allowed but rimless rounds such as .223 Remington aren’t legal for hunting purposes. That alone means it has much to recommend it. According to license sales there were 11.4 million deer hunters in the United States for the 2020 season so you could say there’s a market for it.

What about shooters looking for a new range rifle or home-defense option, though? Is the 350 Legend useful for them? Absolutely.

Randy Bimson, SAAMI – Sporting Arms and Ammunition Manufacturer Institute – technical advisor and director of technical affairs, said the 350 Legend “brings a fresh look and innovation to a very mature cartridge category, opening up new options to both the hunter and recreational shooter.” Nailed it. 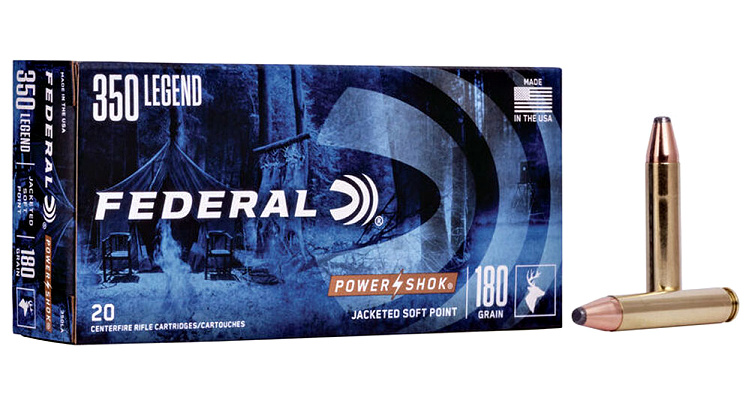 Federal carries a full line of ammunition for the 350 Legend and every load I’ve tried has performed well. Photo: Federal Ammunition.

How are straight-wall cartridges useful?

Well, they allow for the use of heavier-grain bullets in the portable AR platform. But they’re also more accurate than shotgun slugs, shotguns being the go-to for a lot of shooters interested in sending heavier bullets down-range.

It’s also worth mentioning those Federal rounds have a muzzle energy of 1879 foot-pounds. This contrasts significantly with the 1259 foot-pounds of muzzle energy produced by the smaller bullet of the Winchester .223 Remington 45 grain JHP. 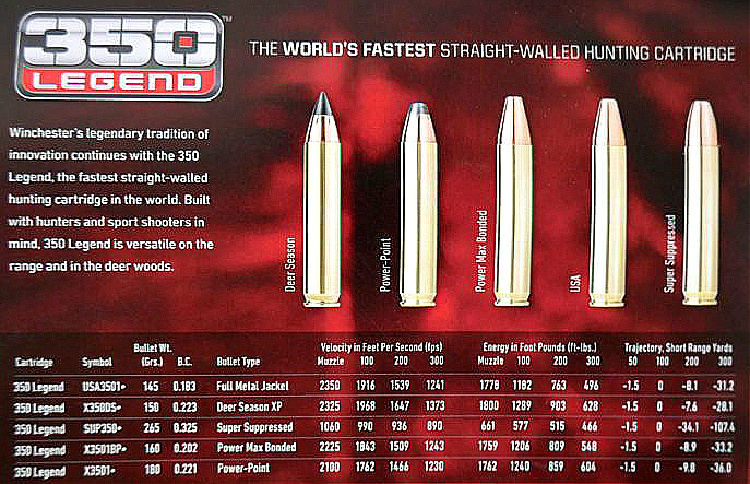 This chart gives you an idea of the 350 Legend’s ballistics and drop rate. Photo credit: Chuck Hawks.

Now for the downside which is also an upside of sorts.

Heavy straight-walled cartridges don’t have the reach of smaller, more streamlined rounds which is both good and bad.

A shorter range means less chance of striking an unintended target while hunting or during a home defense encounter. Of course, it also limits you if longer shots are what you’re after.

Bottom line? All your guns should be purpose-driven. The 350 Legend fulfills specific needs quite well so make sure it suits yours.

Something else to keep in mind about 350 Legend at the time of this writing is that it’s one of the few AR calibers still seen floating on gun store shelves during the ammo shortage. The shortage won’t be ending any time soon, guys, so these things matter.

Rock River Arms has produced more than a few guns I enjoy quite a bit and this model is no exception.

Right out of the box it’s clear this is a well-designed, solidly-built rifle. And although RRA did originally develop this gun for the hunting industry it’s proven to be quite capable of use as a truck gun and for home defense as well.

Yes, this is going to be a favorable gun review.

At first glance, the rifle appears to be a straightforward black-on-black AR but when you handle it, it becomes clear it’s so much more.

The RRA LAR-15M has an upper receiver made from forged A4 steel which has superior corrosion resistance to A2; the lower receiver is forged as well. Its handguard is an RRA 13-inch extended lightweight free float rail that’s M-LOK compatible and it does have a full-length Picatinny rail.

My model has a 16-inch stainless steel barrel with a 1:16-inch twist rate but there is also a chrome-moly barrel model available. The rifle has an overall length of 33 inches with the stock retracted and weighs 6 pounds, 8 ounces, empty.

Other features include an RRA two-stage trigger, RRA overmolded A2 pistol grip, and a low-profile gas block with a carbine-length gas system. The rifle ships with one 10-round magazine, a hard-shell RRA case, and the usual paperwork like manual and warranty information.

The muzzle brake on the RRA LAR-15M 350 Legend has an aggressive edge. Photo: Kat Ainsworth Stevens.

On the range, the RRA LAR-15M in 350 Legend performs beautifully. It’s a well-balanced rifle made to withstand the bumps and scrapes of hard use, which makes me like it even more, and it’s accurate.

My rifle is topped with a TruGlo Omnia 8. Now, it might be easy for you to dismiss that optic because it isn’t a high-end brand but the Omnia 8 outperforms its price point and is my favorite TruGlo optic to date. Don’t be such a brand snob that you miss well-made, affordably-priced products.

The RRA Two-Stage trigger has a small amount of grit in its pull but does have a crisp break and brief re-set. It’s a standard trigger; if you want a smoother, cleaner trigger just drop the aftermarket model of your choice in. Replacing the trigger will tighten up your groups and, if you go with a single-stage, it will improve your rapid-fire abilities if you’re using the rifle for defensive purposes. That said, this is a perfectly serviceable trigger and will get the job done. YMMV.

The 350 Legend was designed by Winchester and is awesome. Combined with the Rock River Arms LAR-15M platform it’s even better. Photo: Kat Ainsworth Stevens.

Thanks to its 16-inch barrel and overall empty weight of 6 pounds, 8 ounces you’ll find this rifle easily maneuverable. It’s done well as a truck gun and can be out the window and on target of things like feral hogs with good speed (I’m in Texas so these things are legal and necessary). Thus far it’s cycled reliably and survived being treated as a duty gun, not a safe queen or dust catcher.

If you’re looking for a durable hard-use rifle in a hard-hitting cartridge, check it out.