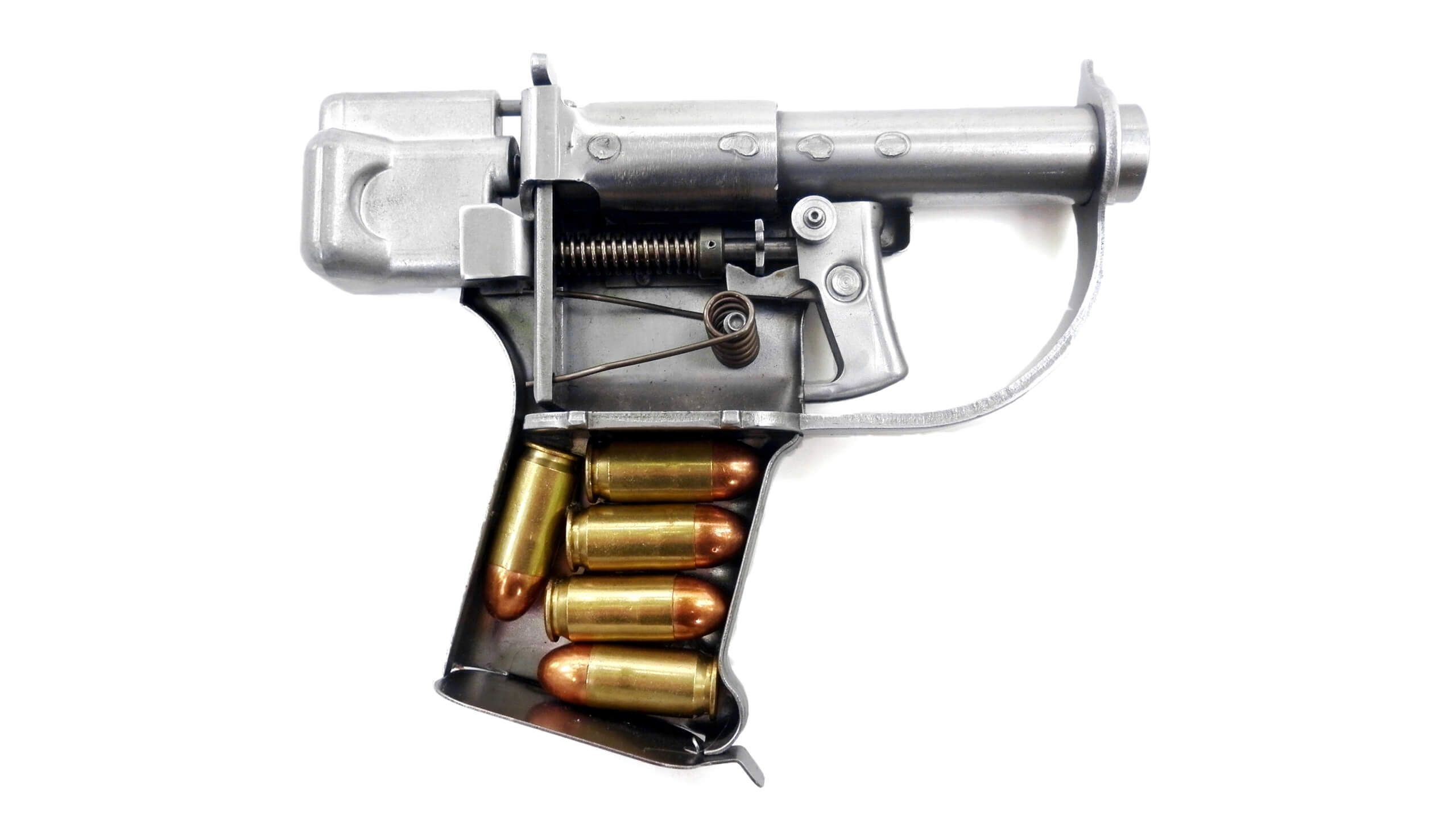 Because of the FP-45 pistol’s clandestine origin, perhaps it’s natural for its history to be clouded by so much myth and misinformation. It is often repeated that they were tossed out of airplanes over occupied Europe en masse, and they were wildly inaccurate junk guns that exploded after a few shots.

Neither claim is true. The FP-45 — later dubbed the Liberator pistol by the OSS — was intended as a stop-gap weapon for resistance fighters in occupied territory, and it was inexpensive by design. However, it was never widely distributed by air as imagined and it was perfectly adequate in design and strength, at least fifty shots worth, to serve its purpose.

In fact, it was a perfect product from a manufacturing standpoint because its cost and longevity were perfectly matched to it application. The story of how a million came to be made is an industrial tour-de-force of American manufacturing.

The Liberator pistol was unique in 1942 in its use of resistance-welded sheet metal stampings and zinc die casting. Welding of any kind, and the use of zinc alloy castings, were then emergent technologies in firearms manufacture. The efficiency they afforded meant the gun cost the U.S. Government a bit over $2 each, boxed for delivery with ten rounds of .45 ACP ammunition.

Only 5″ long and weighing a pound, this single shot FP-45 was conceived as an instrument to sow chaos behind enemy lines in the dark early months of World War II. The idea seems to have originated with a Polish Military Attaché in March of 1942. His request for assistance with arming resistance fighters in Nazi-occupied areas was important enough that it reached the attention of the American Assistant Chief of Staff for Intelligence (G-2) of the War Department General Staff.

In a little over two weeks, their Joint Psychological Warfare Committee completed a detailed plan of action and recommended urgent implementation which was supported by Army Chief of Staff General George C. Marshall.

They recommended a light, simple, inexpensive, powerful handgun to litter the countryside of occupied nations by dropping them from aircraft and what other distribution methods they might contrive to suit the circumstances. Once delivered in theater, these little handguns would be used by guerrillas to ambush/assassinate the enemy at close range. In theory, the guerilla could then take the weapons and equipment of the victim. In this sense, the FP-45 was “a gun to get a better gun”.

While enemy recovery of air dropped FP-45s might be high, and thus its subsequent offensive use by guerrillas low, it was expected that knowledge of its distribution would subject the enemy’s garrison troops to great mental anguish because they would never know how many they didn’t find. The worry of a shot in the back from the dark was almost as bad for enemy morale as an actual shot in the back.

Who Made the Liberator Pistol?

Manufacturing was done in total secrecy at the General Motor’s Guide Lamp factory in Anderson, Indiana. The Guide Lamp division of GM was also responsible for the M3 Grease Gun development and manufacturing.

Given the designation FP-45, one million pistols were manufactured in just six months. The FP designation stood for Flare Projector and was part of a subterfuge to mislead enemy spies.

The assembly work went fast, taking only an astonishing eleven weeks. A total of 300 employees worked around the clock to put together the 23 individual parts that made up each pistol in an average of 6.6 seconds. It took them less time to assemble it than it took the average shooter to load and fire the weapon.

With 100 boxcars of FP-45s pistols ready to ship, political and practical disagreements between the Allies arose about how to utilize them. In the end, the majority of the pistols were destroyed, but a significant number, perhaps 383,000, were sent to active theaters of war with no record of their return.

General Dwight Eisenhower, Allied commander in the European Theater, got FP-45s. He felt that air dropping them wasn’t a practical use of his precious air resources that were better utilized dropping bombs on the enemy. Contrary to the gun show tales of mass air-drops, usually involving secondhand oral history from some now deceased relative who did it, there is no written evidence showing that the FP-45 was ever distributed in any significant quantity in France. The British War Office got 30,000 FP-45s from Eisenhower’s batch and sent them to the Suez, India and Gibraltar.

In July, 1944, another shipment of 40,000 guns from America was delivered in Algiers. At least some of these guns are known to have made their way to guerillas operating in Greece.

In the Pacific Theater, General Douglas MacArthur requested and received 50,000 guns in total and made use of them. Unlike the other theaters of war, there is written evidence that the pistols were distributed in the field. MacArthur himself indicated in a report back to headquarters that he had used the first 8,000 guns received to arm native villagers in the Solomon Islands of Tulagi and Guadalcanal.

The pistols were clearly used by the Philippine guerillas, and I have personally found original guns there. Some were delivered by submarine. Others may have arrived by airdrop, though the complexity of finding anything airdropped into the jungle suggests that wasn’t likely. Airdrops on the coastline were made.

The second largest shipment of guns from American numbered 200,000 and was delivered to Calcutta, India, in July of 1944. A batch of 40,000 went on to Ceylon and another 44,000 to Burma. The rest were destroyed after the war.

The third largest shipment was 100,000 guns destined for Jorhat, India, in August of 1943. Their ultimate destination was China. There is evidence that the pistols did make it into the hands of the locals, guerillas and bandits alike, but exactly how many will never be known. The only recorded image of an FP-45 pistol in theater during World War II shows the pistol in the waistband of an Asian man in Kunming, China.

There is no way to know how many FP-45 pistols actually got used as intended in World War II, but I’ve seen no evidence it played a direct strategic role.

It may have had an impact in the Pacific and CBI (China-Burma-India) Theaters, but odds are it didn’t simply because the offensive operations of the resistance movements themselves, in general, did not play a strategic role in the war. Getting an FP-45 might have meant a fighting chance for a guerilla, but the guerilla fighter’s contribution to victory was usually confined to the tactical level.