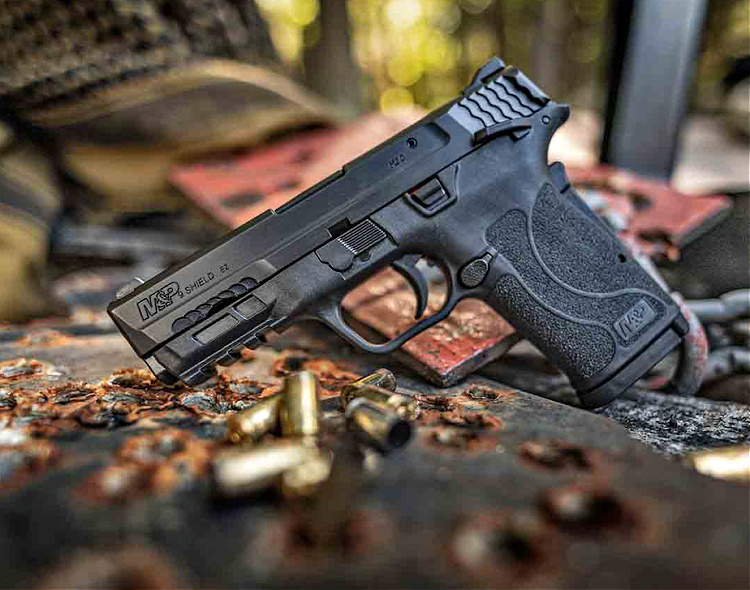 One of the struggles with compact and subcompact firearms often comes down to the magazine capacity and how to get them fully loaded. In this regard revolvers are often easier, just open the cylinder or loading gate and you are ready to go. When you have a similar sized semiauto pistol it can be a bear on getting them to hold a full battery of rounds.

Sure there are loaders that make this easier by compressing the spring for you, but what about companies making the magazine easier to load from the start?

Smith & Wesson has done this in spades with their magazine design on the Shield EZ.

A plastic tab protrudes from either side. The shooter can grasp either side or both sides at the same time and pull down the follower while sliding a new round into place and thus fully loading the magazine.

The concept is not new. Smith & Wesson had done this before, as have companies like Beretta, where a simple but small metal tab protrudes slightly from either or both sides. In many cases, if you have strong enough thumbs, they are not even used. Yet with the Shield EZ, it is easy, comfortable, and intuitive.

This is imperative for the market that the S&W Shield EZ is geared toward. Namely, female shooters, the elderly, people with a disability or arthritis, or carpal tunnel that may give them diminished hand strength or manual dexterity.

That is not to say that the S&W Shield EZ is solely geared toward that demographic. Although small in size, the M&P Shield EZ 9mm packs a wallop in a decent caliber and is not merely a typical mouse gun or ladies’ purse gun when it comes to firearms in this size and shape. 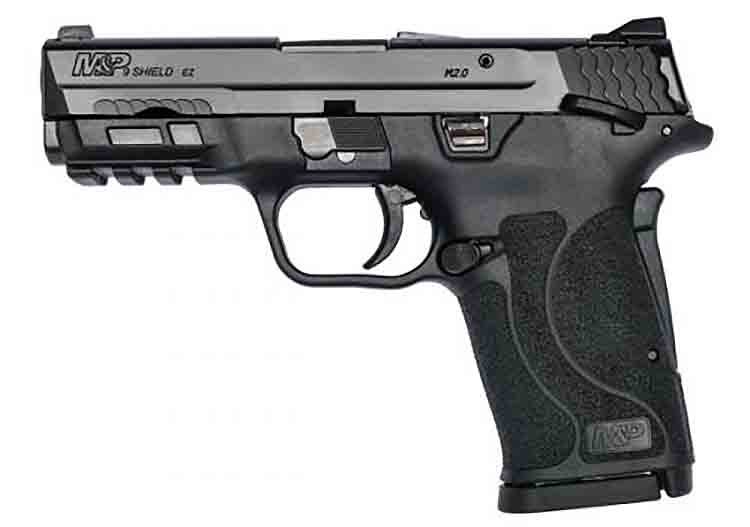 In addition to its easy-loading magazine, the pistol has a smoother trigger than a comparable striker-fired pistol because it uses an internal hammer. 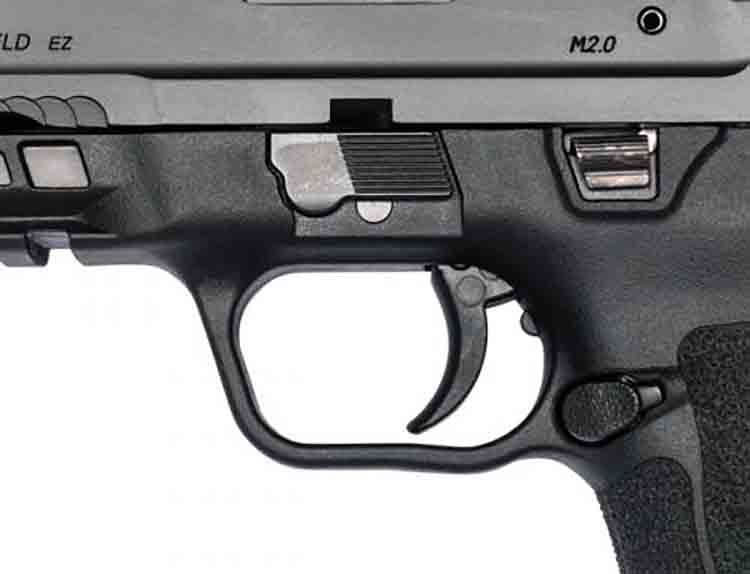 This is backed up by a grip safety similar to what you might be familiar with from the 1911 platform. It makes the most sense from a shooter’s perspective when dealing with a hammer-fired handgun. 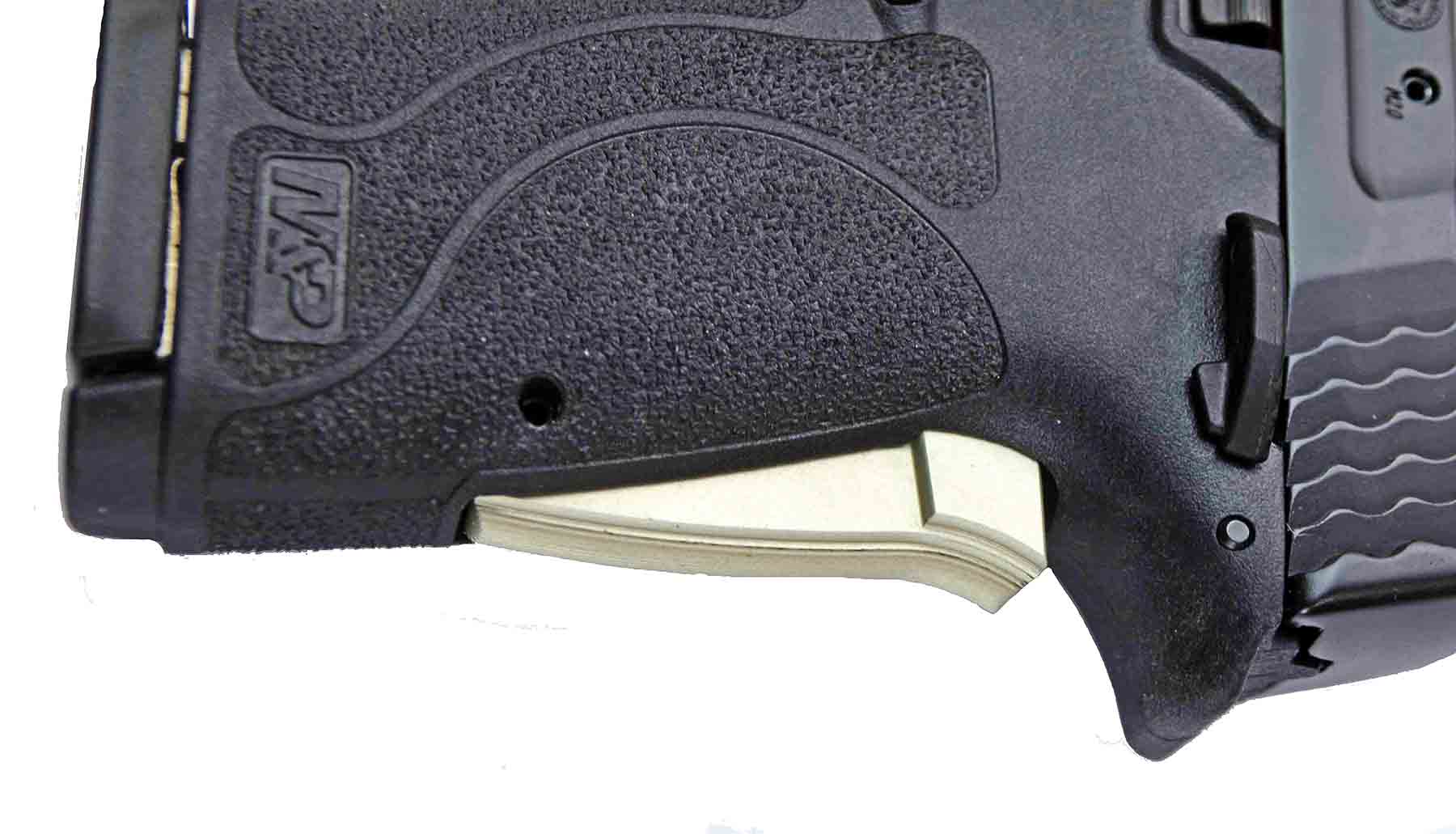 The M&P Shield EZ 9mm internal hammer is backed up by the grip safety.

While we thought the M&P Shield might have been the final word on a concealed carry handgun, the Shield EZ seems to have come at it in a different direction and made for one hell of a competitor within its own ranks.

Some critics may decry the small size in spite of its caliber or see the internal hammer as being dated as opposed to a striker, yet strikers were very common in the early twentieth century for many pocket-sized pistols.

The internal hammer makes it easier to rack the slide and the recoil springs in place here certainly make all the difference as well. An external frame-mounted safety is available as an option and one thing about Smith’s external safeties on pistols like these is that it allows the trigger to be pulled while the safety is engaged.

Smith & Wesson went out of their way to make this pistol easy to manipulate, easy to hold, and easy to carry, but how about shooting it? 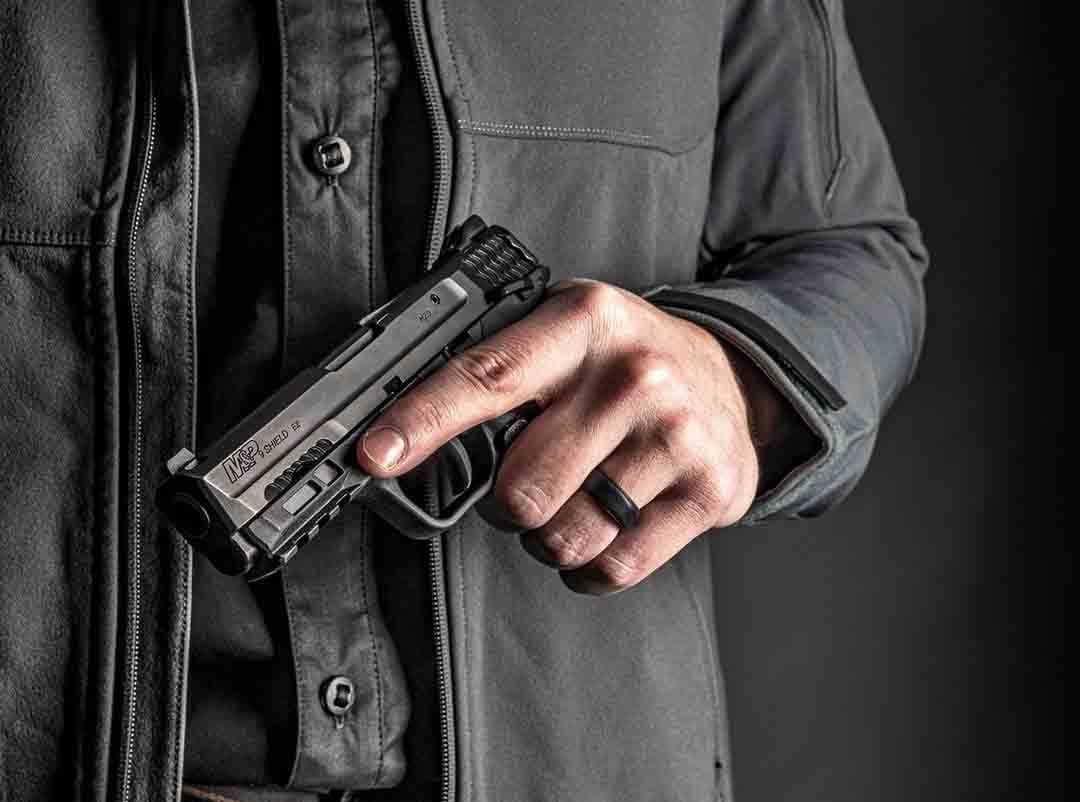 On the range, the S&W Shield EZ is a performer.

Its short barrel, short sight radius, small size, and lack of ability to add a red dot may keep it off the USPSA circuit but all those characteristics line up when you need to carry a handgun.

It is fully capable of sub 3 in. groups out to 75 feet. More importantly, its size and comfort levels will ensure that it is there when you need it and not sitting in a console in your truck, a spare pocket in an off-body carry bag, or back home in the safe.

For a small and lightweight handgun, the Smith & Wesson Shield EZ is extremely easy to shoot well and should exceed any compact handgun buyer’s expectations.

There is a Performance Center version of the pistol which has improved sights, a slightly lighter or smoother trigger, and a single port in a slightly extended barrel to reduce or negate muzzle flip. 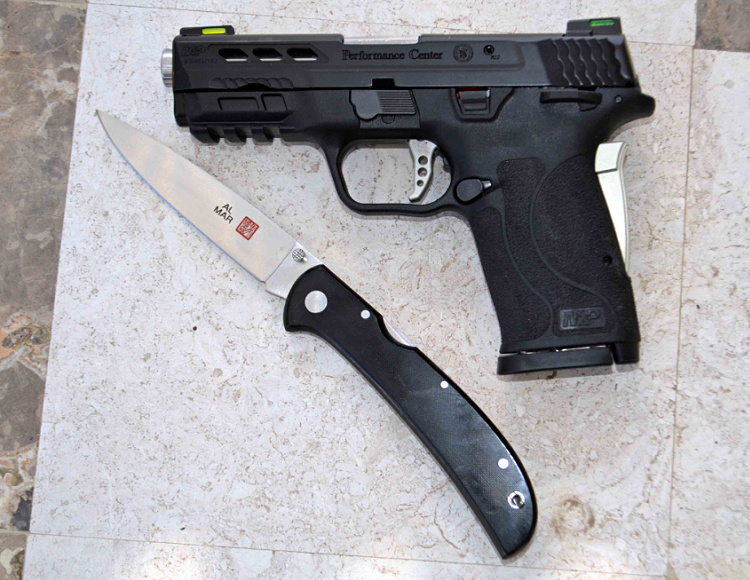 Julie Golob also reviewed the silver, no thumb safety version of the Performance Center Shield EZ.  These next several images are included so that you can get a close-up view. 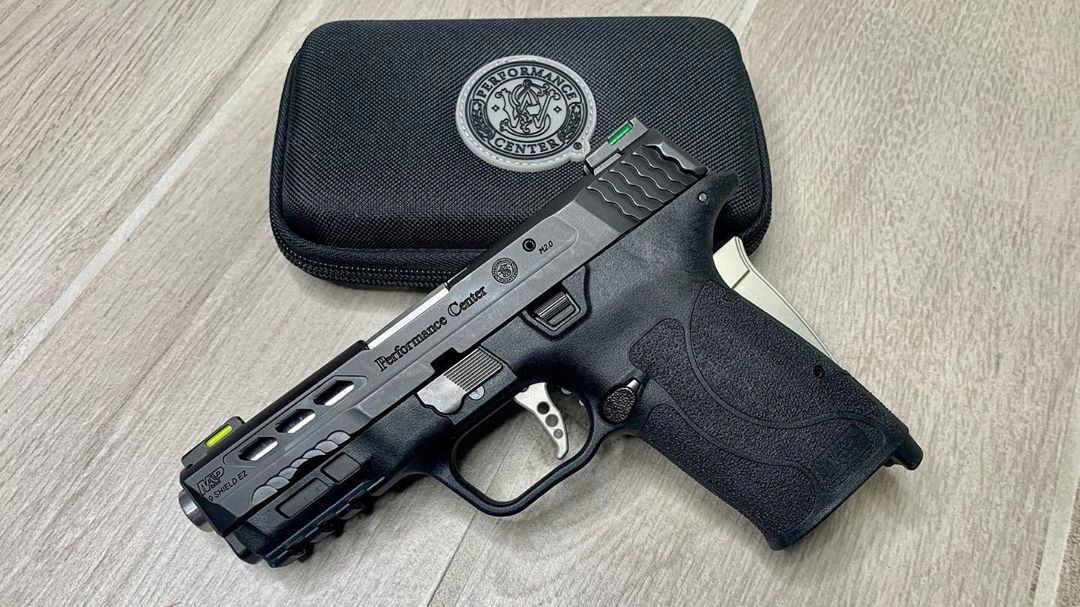 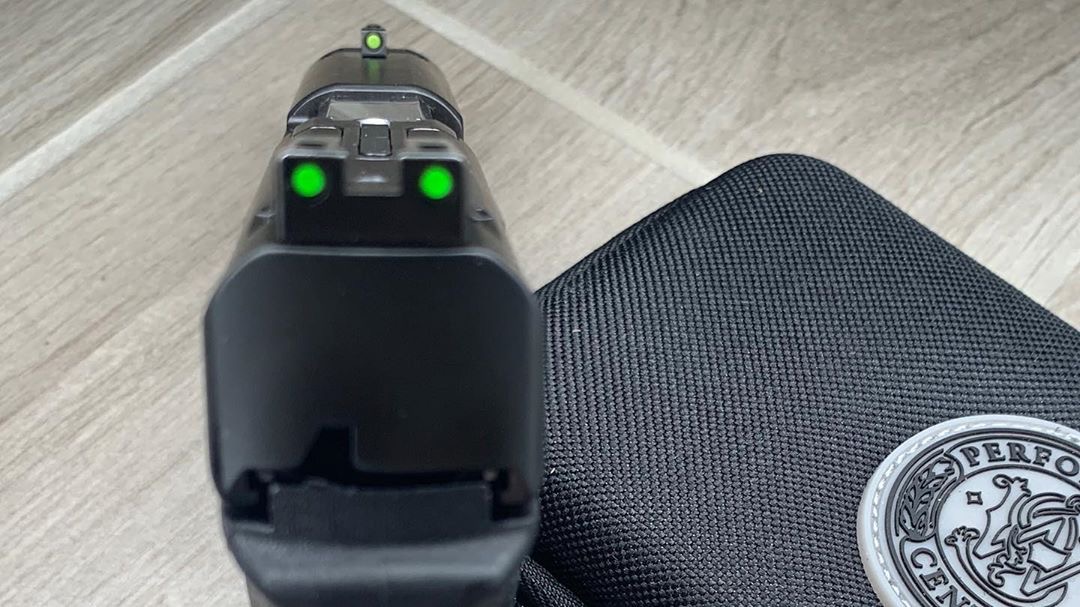 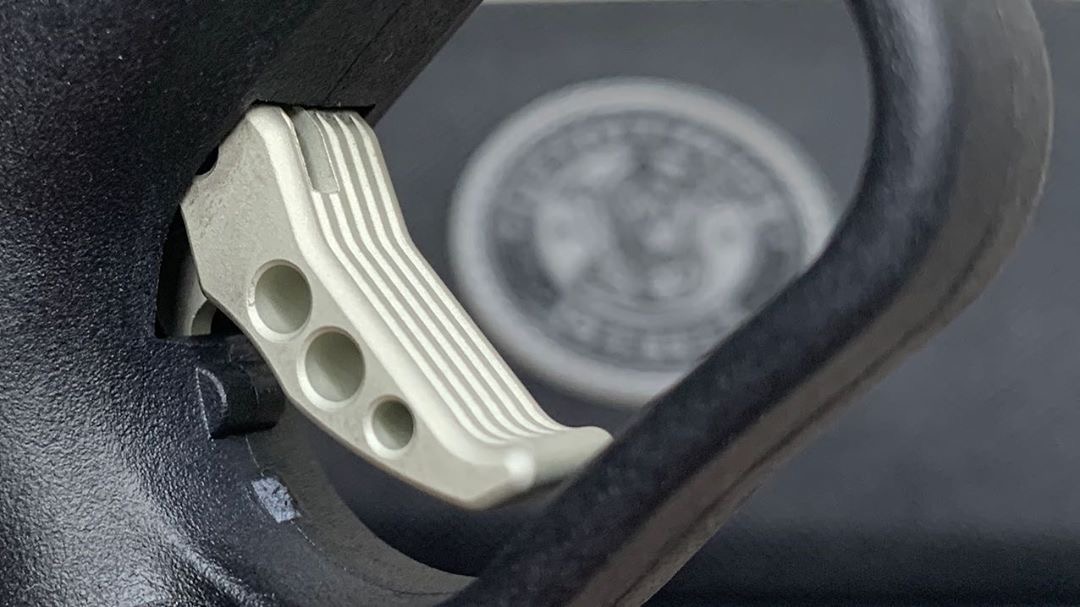 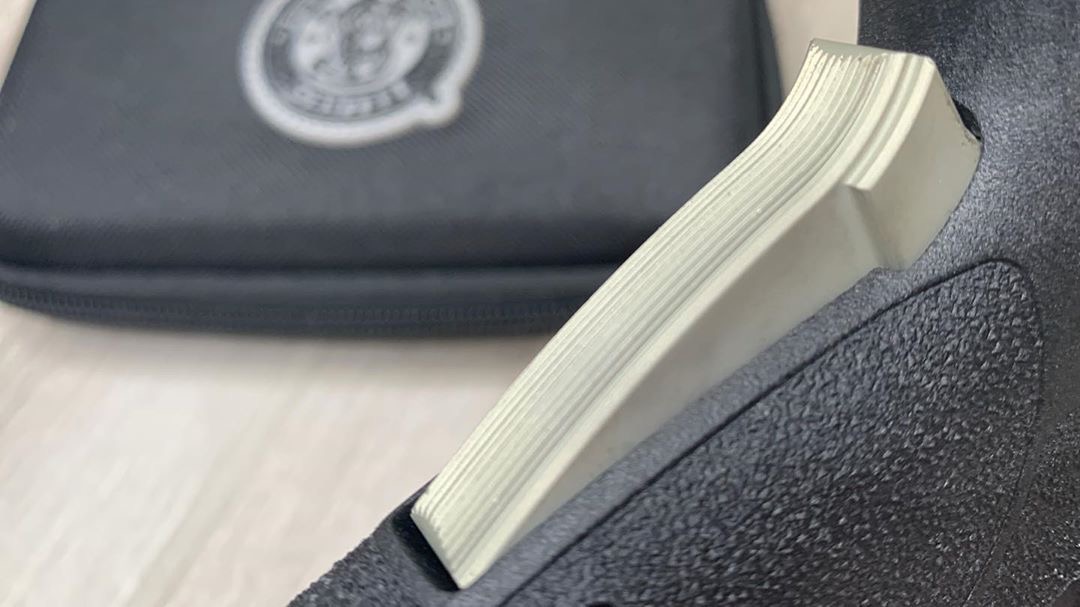 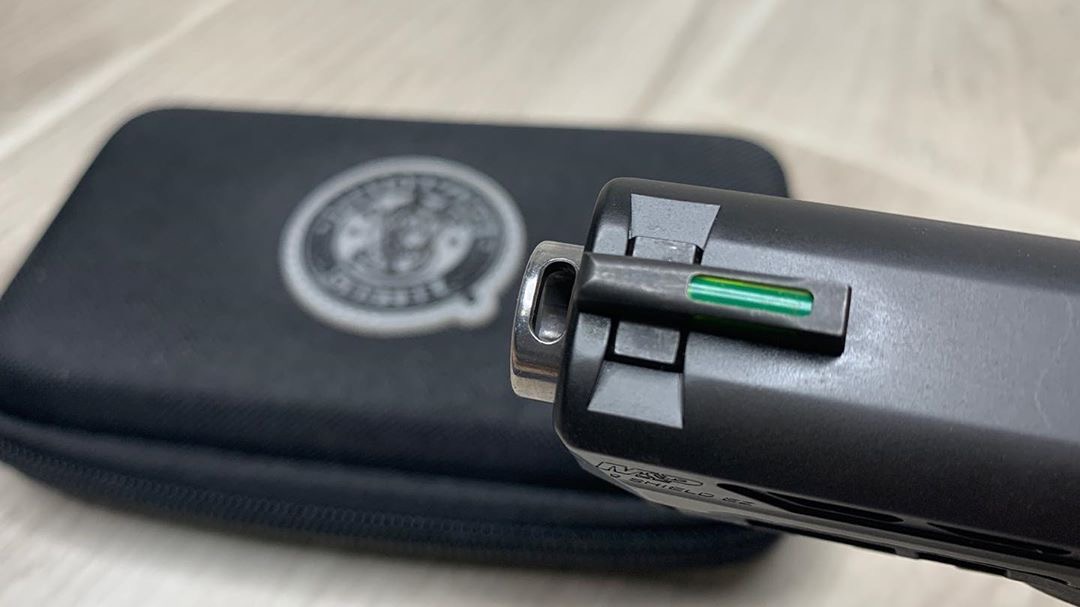 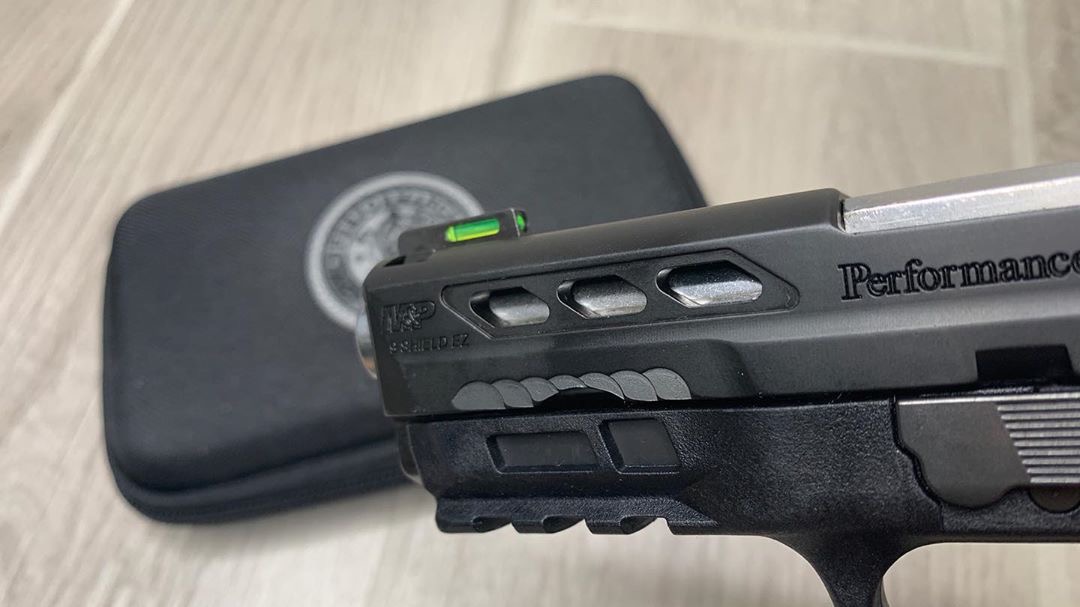 Mike “the Mook” Searson is a veteran writer who began his career in firearms at the Camp Pendleton School for Destructive Boys at age 17.  He has worked in the firearms industry his entire life and is both an experienced gunsmith and ballistician. Mike has been writing about guns and knives for numerous publications for years- over 3,000 articles worth, for a wide array of titles. He also consults with the film industry on the subject of weapons. You can learn more about him at MikeSearson.com or follow him on Twitter, @MikeSearson. He’s also on Instagram @mikespartansearson.