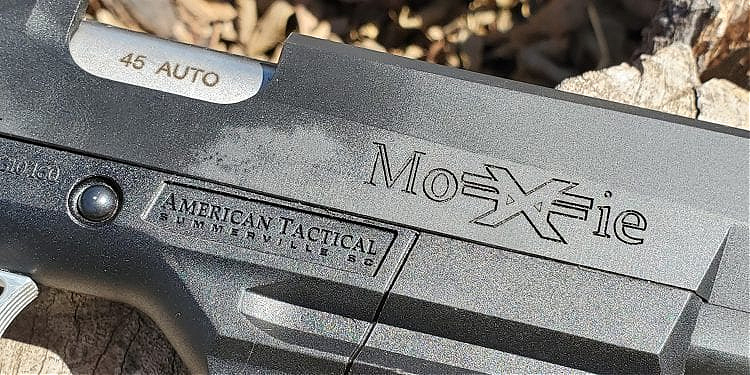 The world of 1911s has a tendency to be divided into specific factions: Series 70 versus Series 80, Government versus Commander, classic 45 ACP versus 9mm—the list goes on.

In recent years a new category has appeared to make things interesting from an entirely new angle. That category is steel versus polymer. Polymer, once the purview of Glock, has become the spotlit substance of the hour and now you can find it with increasing frequency in 1911s.

Meet the American Tactical FXH-45 Moxie, (FXH stands for Firepower Extreme Hybrid), the affordably-priced 1911 chambered in the favored 45 ACP round but made using….polymer.

In case you’re unfamiliar with ATI (now known as American Tactical) here’s a quick look at their history.

ATI is, according to their website, “a world-wide importer of firearms, ammunition, and tactical equipment to the United States of America. While still a relative newcomer to the firearm industry, ATI is moving quickly to establish itself as a reputable and recognized importer of many high quality products from around the world.”

If you’re thinking this means ATI exclusively imports firearms, you’d be wrong. The company made the move to South Carolina years ago for their dealings here in the States and has put significant time into getting things going for American-made production.

Today, rebranded as American Tactical, the company has begun producing certain firearms right here in the United States and the FXH-45 Moxie is one of them. So yes, ATI imports firearms, but American Tactical is now also handling production here.

With a gun like the ATI FXH-45 Moxie, you’re likely more invested in knowing the details than you might otherwise be. In the name of getting right to it let’s start with the frame itself rather than a top-to-bottom discussion of parts.

The frame of the Moxie is made using polymer but is technically a hybrid. It does have a patented polymer frame but it also has a pair of metal inserts within the frame for improved durability.

The frame of the Moxie is manufactured from polymer with two steel inserts for added stability. (Photo credit: Kat Ainsworth Stevens)

Polymer is a substance made of macromolecules and may have natural or synthetic roots. It might be tempting to refer to polymer-made guns as plastic fantastic—or is that just me?—but in reality, although all plastics are indeed polymers it is inaccurate to say all polymers are plastic. They’re not.

There are a lot of reasons to recommend the use of polymer for guns, such as the fact it isn’t going to corrode, it’s highly moldable, and it is durable enough to withstand serious abuse. It’s also lightweight and less pricey to produce. Why polymer? Why not.

Just because polymer found its way into the frame of the Moxie doesn’t make it any less of a 1911.

ATI did a good job designing the Moxie as an affordably-priced yet reliable poly-frame 1911. (Photo credit: Kat Ainsworth Stevens)

American Tactical designed the frame as you’d expect for a Government-sized 1911 albeit perhaps somewhat thicker. The pro of the slightly broader frame is that it’ll give you a better grip than many single-stacks while other changes, such as the oversized and angled trigger guard, give you an edge when running the gun.

An accessory rail ahead of the trigger guard allows you to mount lights and/or lasers with no need for modifications—this is always a pro for handguns—and the textured grip panels keep the gun in your hands even when said hands are wet or sweaty. American Tactical put molded finger grooves on the front strap of the grip that seem to be made to fit a variety of hand sizes but are certainly a matter of personal preference. An extended beavertail helps you maintain a high grip while simultaneously protecting hands from possible slide bite.

The slide of the Moxie is 4140 Steel—a low alloy comprised of chromium, molybdenum, and manganese that’s known for being incredibly impact resistant and having a high fatigue strength. American Tactical gave the slide a Parkerized finish to protect it from corrosion and wear and tear. It’s serrated at the rearward portion to give shooters a better grasp when racking the slide.

One big bonus for customization is that the Moxie takes Glock sights. This means it ships with standard Glock sights and that you can choose to place any aftermarket Glock-compatible sights on it once it’s in your hands. It’s a great feature for shooters with specific desires when it comes to sights and opens up a world of possibilities considering the enormous number of Glock sights on the market.

The Moxie is made with a removable top plate for easier mounting of RDS; various-model optics plates are available from American Tactical at an additional cost. And if you want a Picatinny on your 1911 they’ve got you covered. A Picatinny rail that can easily be mounted to the gun can also be purchased from American Tactical, making your optics options endless.

Other features include a skeletonized hammer and trigger, magazines with extended bases for faster magazine changes, and an angled topmost slide surface for reduced snagging. This gun is compatible with most aftermarket Government-sized 1911 parts.

The first time I ran the Moxie was during a media roundtable in Dallas, Texas, after which I acquired one for more in-depth testing.

Shooting from the bench at a distance of 15 yards the Moxie produces five-shot groups averaging 2.5 inches. At 10 yards, from the bench, groups hover around 2.0 inches. Firing offhand at 10 yards it is possible to get a five-shot group of 1.4 inches using Federal American Eagle 45 ACP 230-grain FMJs, remembering that is with slow, methodical fire.

Changing to rapid-fire it’s still doable to stay under 2.0 inches at 10 yards but it is significantly more difficult. This is not a precision handgun but it is accurate, and accuracy plus its reliability means it could be used for self-defense purposes.

The skeletonized trigger of the Moxie gets the job done and has a reasonably clean break. It can be run quickly with no issues, which is important. And although the factory Glock sights its ships with function fine, you will discover greater accuracy if you swap them out for aftermarket options such as the XS Sights R3D Night Sights in green.

The bushing of the Moxie is slightly loose but not sloppy and the gun remains accurate. (Photo credit: Kat Ainsworth Stevens)

Fitment of the barrel and bushing are slightly loose but not excessively sloppy. Overall the gun performs a bit beyond its price point which isn’t something that can be said for all guns whether they’re high-end or afforadably-priced.

This isn’t a breathtaking showpiece 1911 meant to be kept as a safe queen. Its clearly meant for functionality.

Since my guns are meant to be tools, that’s just fine with me. The ATI FXH-45 Moxie cycles consistently and it’s accurate, making it a viable option for a variety of gun owners.

Whether you’re looking for an entry-level 1911, curious about polymer hybrids, or simply want to add another handgun to your collection without breaking the bank, consider the Moxie.