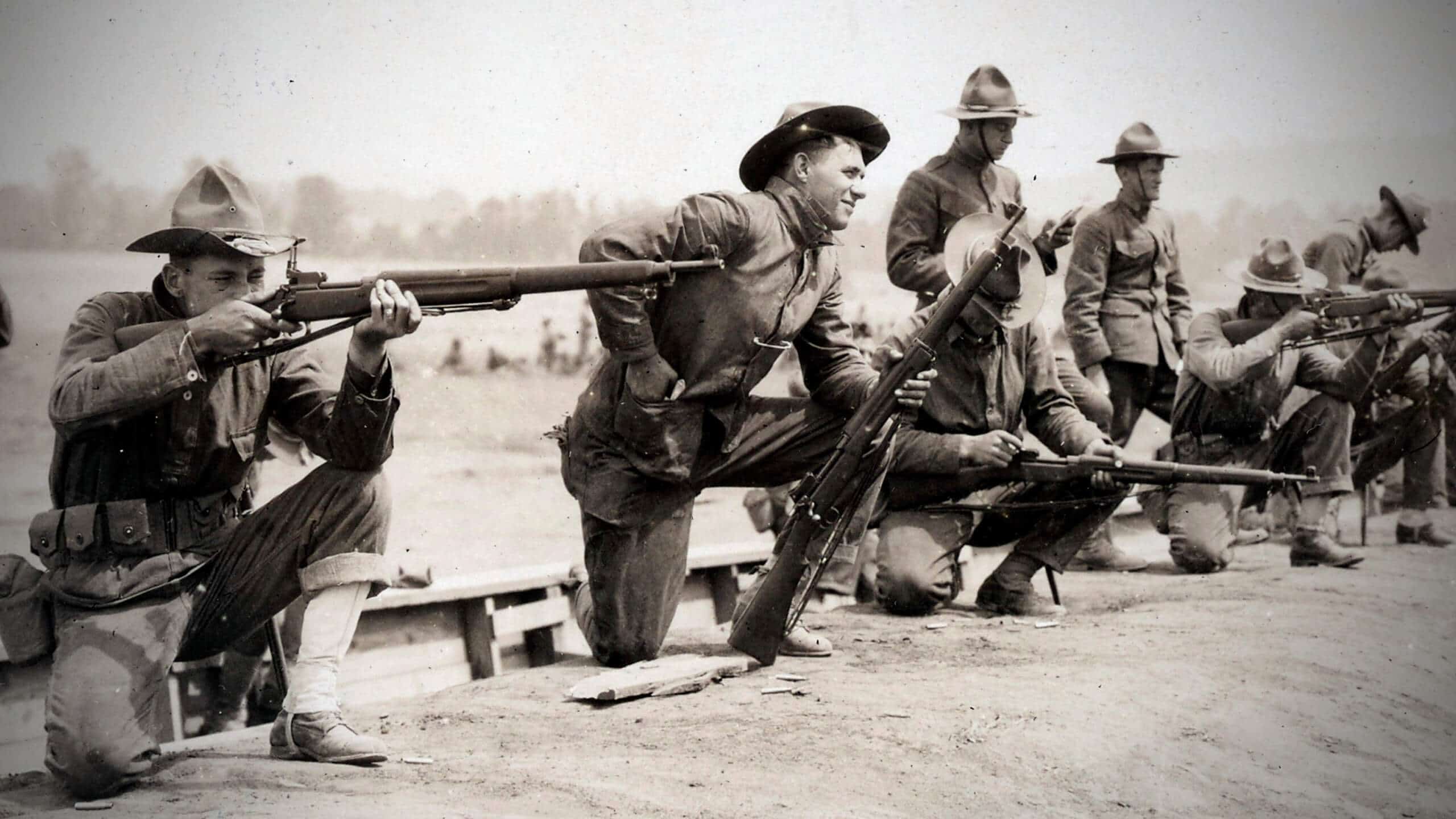 When America joined the Allies in the trenches of World War I in April 1917, U.S. troops were equipped with the wonderful M1903 Springfield rifle.

Unfortunately, there were never enough Springfield rifles to go around during the war. To equip America’s burgeoning armed forces, an additional rifle would be needed.

A stroke of good luck found three American armament plants already manufacturing the Pattern 1914 (.303) rifle for the British. More 1.2 million P14 rifles had been produced in America when the British contract ended in the summer of 1917.

After much consideration, U.S. Ordnance planners opted to keep the production lines turning out the P14 rifles with one notable change — the weapon was altered to chamber the .30-06 round.

The P14 proved relatively simple to convert to American needs, as the rifling, bolt face, magazine and stripper-clip feed dimensions were easily changed to fit the U.S. .30-06 cartridge. The stock was slightly altered, and its weight was reduced by a little more than four ounces.

The modifications worked well, and the new “Enfield” rifle began turning out in massive numbers. Also adopted was the British Pattern 1914 bayonet, which became the M1917 bayonet (overall 21.8″ long with a 17″ blade).

The M1917 became America’s most numerous combat rifle of World War I, with an estimated 75 percent of all Doughboys carrying the Enfield at the end of the war.

Even so, the M1917 was never as popular as the elegant Springfield rifle. The M1917 was heavier than the M1903 by more than a pound. It was also three inches longer.

Ultimately, many Doughboys considered the M1903 rifle to be better balanced and a bit more accurate. For the average soldier however, there was little to pick between them in terms of combat efficiency.

In that light, despite its issues of weight and length, the M1917 offered a ladder aperture sight, which provided quicker target acquisition and greater accuracy than the Springfield or comparable Mauser sights.

Up until about 15 years ago, the M1917 rifle was often discounted by military rifle collectors. Certainly, it does not have the beauty of the classic Springfield rifle, nor does it have the celebrity. In many ways, the M1917 has always suffered from the “not-invented-here” bias.

These days, as the collectors’ market is armed with deeper information and greater appreciation, prices for the M1917 have risen dramatically. Rightly so, I think, for a rifle that was there when America needed it and became one of the most important instruments of Allied victory in the Great War.

After World War I, many Americans heard the story of Sergeant Alvin York and his Medal of Honor exploits.

On October 8, 1918, during the Meuse-Argonne offensive, York and his fellow doughboys of the 328th Infantry Regiment (82nd Division) suffered heavy losses while under fire from a group of German machine gun nests. York, at that time a corporal, was the only noncom remaining, so one of America’s greatest marksmen took it upon himself to shoot his way out of trouble and ultimately capture 132 German troops in that action:

And those machine guns were spitting fire and cutting down the undergrowth all around me something awful…I didn’t have time to dodge behind a tree or dive into the brush…I began to exchange shots with them…all I could do was touch the Germans off just as fast as I could…All the time I kept yelling at them to come down. I didn’t want to kill any more than I had to. But it was they or I. And I was giving them the best I had.

York was giving the Germans the best he had with a M1917 rifle.

Over the years many folks assumed that he used a M1903 Springfield rifle that day. The 1941 feature film “Sergeant York”, directed by Howard Hawks and starring Gary Cooper, showed York using a Springfield rifle, and this furthered the confusion.

York’s diary and comments by his son proved that M1917 rifle was delivering the .30 caliber rounds triggered by one of America’s greatest soldiers.

After the Armistice in November 1918, many M1917 rifles remained in service with the American Army of Occupation in western Germany. By the early 1920’s, most M1917 rifles went into storage, as America’s interwar army carried the M1903 Springfield.

Some M1917 rifles were provided to American shooters through the Department of Civilian Marksmanship and the NRA. In civilian hands the M1917 was often reconfigured as a sporter and proved to be a popular hunting rifle.

Hundreds of thousands of the rifles remained in storage, waiting for the next chance to serve America. That opportunity would soon come.