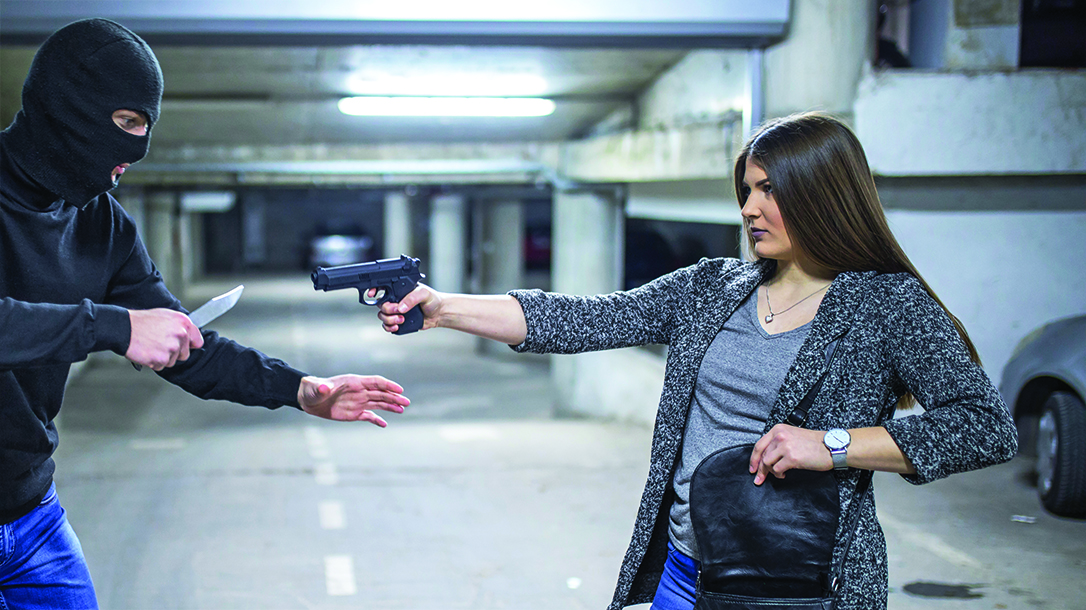 As reported in Maine’s Bangor Daily News, a man was awakened by a knock at the door of his apartment. When he answered, he saw a strange woman, who said she knew the former residents of the apartment. As his suspicions heightened, two men then forced open the door, knocking the man down. One of them punched the man, as the second assailant wielded a knife. The man attempted to fight back, but the knife-wielding assailant repeatedly swung the knife at him, resulting in a minor cut to the victim’s abdomen.

The man’s roommate ran out of his bedroom, armed with an electric guitar, and tried to use it as a weapon. Unfortunately, one of the home invaders managed to wrest possession of the guitar and used it to strike the back of one of the men’s heads.

Eventually, one of the victims broke free and ran to his bedroom, where he armed himself with a .22-caliber handgun equipped with a laser sight. He proceeded to shoot one attacker in the leg, which caused the attackers to flee the apartment. As the three fled, they entered a vehicle, and the victim fired two .22 LR rounds that impacted the vehicle’s trunk, in an effort to aid police in identifying the vehicle.

At the end of this violent encounter, the victims were saved by a .22 LR handgun.

Recoil control is probably one of the most difficult dynamics of shooting, and all shooters must learn to overcome recoil. While grip, stance, sight alignment, sight picture, trigger pull and breathing are all within the shooter’s control, the explosion of the round and the blowback (recoil) it causes in a weapon are beyond their control.

Part of shooting involves mental and physical strength to ensure the handling of the weapon compensates for the unnatural explosive process of the weapon. Not mastering that part of a shot will always reduce a shooter’s ability to shoot well, and in some cases it causes a fear of shooting.

Thankfully, there is a solution, and it can be found in .22 LR pistols. This round has the distinction compared to other ammunition that because of its small size it allows a shooter to master shooting mechanics with almost no recoil. That lack of recoil can help many shooters master the mechanics of shooting and overcome their fear of taking a shot, before they move on to larger-caliber rounds.

The other added benefit is that, when all else fails, the .22 LR round will shoot like any other round and impact a target like any larger round, including in a self-defense situation. While the .22 LR does not pack the punch of larger rounds, if it hits where intended, it will still do the job. If not, then its lack of recoil makes it easy to follow up with other rounds that will hopefully have an impact and stop the threat. The key to this is the choice of bullet, as there are many different .22 LR rounds, and it is important to purchase a quality round specifically for self-defense use. An old adage is that the weapon you use is just as important as the type of round you choose, and with .22 LR pistols, there is a difference between a round meant for training and one used for self-defense.

The Walther PPQ .22 LR is a full-sized—almost 9mm-sized—weapon available in .22 LR. The pistol looks as good as any of its higher-caliber cousins, but it’s chambered in .22 LR. The weapon can use a standard PPQ 9mm holster for practice. It also gives the shooter the same ergonomics, controls and trigger feel as its 9mm cousin.

The pistol is also designed for both right- and left-handed shooters and has an ambidextrous slide stop and reversible magazine release button. You can add premium features, including an adjustable elevation sight and a threaded barrel, which makes this pistol both practical and tactical. (waltherarms.com)

Another option is the Walther P22 Q, the first polymer-frame semi-auto rimfire pistol. Its ergonomics are supported by interchangeable backstraps, making it a comfortable handgun to shoot. It also offers an ambidextrous magazine release and slide safety, easy for both right- and left-handed shooters.

The Ruger SR22 has the look and feel of a Walther P22. Ruger designed this pistol to be versatile and ergonomic, so it fits comfortably in the hand. The grip has a rubberized finish and a small hump to help maintain a better firing grip. The grips are removable, so shooters with smaller hands have the option of changing to smaller grips that sit more naturally in their hands.

Combined, these features ease the burden of racking a pistol slide. The pistols equipped with the Lite Rack system are ideally suited for new shooters or those who struggle with racking traditional slides. Whether used as a training tool or as a concealed-carry option, the low-recoil Lite Rack LCP II in .22 LR allows shooters to train with and operate a pistol with confidence.

Completely made in the U.S.A., the Smith and Wesson M&P was engineered with great ergonomics for all shooters. This semi-automatic compact pistol is a reduced-size M&P pistol. It offers a threaded barrel and an ambidextrous manual safety. The weapon also has a reversible magazine release for left- or right-handed shooters, a Picatinny-style accessory rail and a magazine safety that won’t allow the weapon to fire without the magazine fully inserted. This addition to the Smith & Wesson line offers an M&P-type firearm in a caliber anyone can use or train with. (smith-wesson.com)

This pistol looks and functions just like its M9 9mm counterpart. The M9A1_22 is an exact replica of the M9, but in .22 caliber, and features the same operation, controls and takedown as the venerable Beretta M9. It’s available with 10- and 15-round magazines. The pistol has removable sights and interchangeable grip panels that can also fit the 9mm Beretta M9. Due to its full size, it’s easy for shooters to handle and offers an accurate and low-cost pistol for training or for self-defense. The Beretta M9A1_22 provides an experience nearly identical to that of Beretta’s 9mm versions. (beretta.com)

The goal of learning to shoot is to become proficient. Proficiency is built with proper training and developing good muscle memory. While mastering recoil is important with larger-caliber pistols, the .22 LR removes that one issue and enables new shooters to build that muscle memory with a real pistol that gives them the added benefit of being able to hit where they are aiming without the fear of recoil. Whether for training or home protection, for individuals who have a difficult time mastering recoil, the .22 LR pistol is a great choice.

This article is from the February/March 2021 issue of Personal Defense World magazine. Grab your copy at OutdoorGroupStore.com.