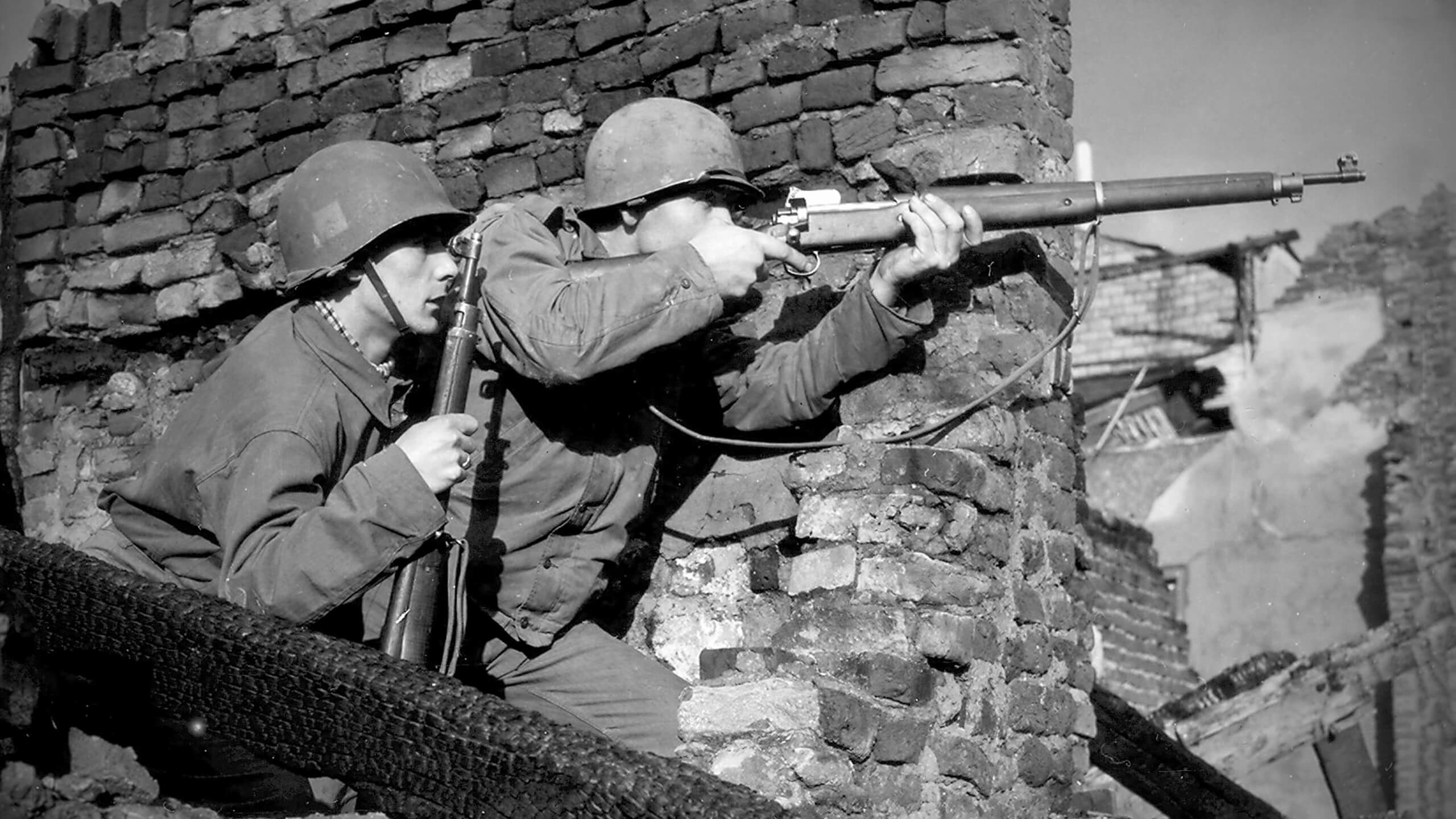 The “War to End All Wars” had come and gone, and by the end of 1941, America and the rest of the world were back at war. Once again, the U.S. military found itself woefully short of weapons and U.S. Ordnance men scoured America’s available stocks of small arms.

After spending nearly 20 years in storage, the U.S. M1917 “Enfield” rifles from World War I were called upon to serve once more. During that war, the M1917 had been America’s most numerous combat rifle, equipping almost 75 percent of all the Doughboys in the AEF.

After the Great War, U.S. Ordnance opted to maintain the M1903 Springfield across the board as America’s primary battle rifle. Even after the semi-automatic M1 Garand rifle was adopted in 1936, the M1903 continued to predominate throughout the U.S. military as M1 production lagged, and M1917s gathered dust. However, the attacks on Pearl Harbor and the invasion of the Philippines brought the American Enfield back into service.

In the early days of World War II, while production of the M1 rifle moved into high gear and manufacture of the M1903 was simplified and ramped up, many new recruits received their initial rifle training with the M1917. As the war progressed, some trainees began with the M1917 for basic drill, the manual of arms, and bayonet practice — then moving on to the M1903 or M1 for marksmanship training.

Coming out of storage, many M1917s needed reconditioning — primarily barrels, bolts and stocks. To address this, more than 123,000 new Enfield barrels were made by September 1944, and M1917 rifles could be found at training camps and on guard duty all around the United States.

G.I.s had the same complaints about the M1917 that the Doughboys before them had — it was too heavy, too long, too cumbersome (9 lbs., 3 oz. and 46″ long). Even so, it was also too good for U.S. Ordnance to pass up, and once again the Enfield was there to serve when America needed it.

Most M1917 rifles stayed in the United States, but a few thousand went overseas in the hands of American combat troops. Shots fired in anger in U.S. hands were rare, but it did happen on occasion. Artillerymen carried the M1917 in North Africa and Sicily, while MPs were equipped with the rifle in Italy as well as Western Europe. Navy Seabees carried the M1917 in the early days of the Pacific War, and U.S. Coast Guardsmen took the Enfield with them to the Arctic on the Greenland Patrol.

The M1917 may not have been a prime battle rifle with American troops in World War II, but the weapon did make significant contributions fighting the Axis in the hands of our allies.

The Japanese air strikes on Pearl Harbor on December 7, 1941 drew America into World War II. The next day, Imperial Japanese troops began their assault on the Philippines. The M1917 rifle was there to oppose them, carried by the men of the Philippine Commonwealth Army and the Philippine Constabulary.

The bitter campaign in the Philippines lasted until May 8, 1942, but the M1917 continued fighting even after the American surrender. Filipino guerillas, along with some American holdouts, remained in action against the Japanese, resisting until U.S. troops returned to retake the islands, beginning on October 20, 1944.

More than 200,000 Filipinos and several hundred Americans made up the resistance in the Philippines, combating the brutality of the Japanese Kenpeitai (military police) and confounding the occupying forces so well that the Japanese only truly controlled 12 of the 48 Philippine provinces. Filipinos continued the fight until the Japanese surrender in August 1945, some guerrillas hanging on to their trusty Enfield for the duration.

China had been at war since the Japanese invasion of Manchuria during September 1931. By the time the U.S. entered World War II, the Chinese were facing critical shortages of weapons of all types.

To help fill the need, the U.S. Army Services of Supply, China Theatre provided the Chinese with thousands of M1917 rifles. Most of these went to the troops of “X-Force”, the Chinese National Revolutionary Army’s Expedition Force (the Chinese New 30th, New 22nd, New 38th, 14th and 50th Divisions) — all together about 75,000 men. These troops were equipped and trained by American advisors, beginning in 1942.

As the M1917 was already considered overly long and heavy by Western soldiers, the smaller stature of Chinese troops exacerbated the problem. In response, the M1917 was shortened by 5″, trimming both the barrel and stock. The NRA’s Bruce Canfield describes in his recent book “U.S Small Arms of World War II” that markings on surviving examples of these shortened rifles indicate that the modification work was done at the Ishapore Arsenal in India, which was close by the X-Force training areas.

The M1917 went on to fight in the Chinese Civil War (1945-1949), and examples of M1917 rifles (modified or standard) given to the Chinese Nationalists in World War II were captured by U.S. forces in Korea and Vietnam.

Beginning immediately after the fall of France in June 1940, many French troops outside of metropolitan France began to consolidate into the forces of “Free France.” These units grew slowly until the invasion of Normandy in June 1944, and the invasion of Southern France that August. By September, the First Free French Army had grown to more than 550,000 men.

They carried a hodgepodge of rifles, ranging from British SMLEs, to German Mausers, original French Lebel, Berthier and MAS-36, and some U.S. M1903 Springfield rifles. In the autumn of 1944, the French troops began to receive the M1917, and the American Enfield rifles can be seen in many photos of French troops in action along the Franco-German border during winter/spring campaigns of 1945. The M1917 soldiered on in France until the early 1950s, and some possibly were sent to French colonial troops in the early days of their war in Indochina.

The Danes received M1917 rifles to equip their military until M1 Garand rifles became available in the early postwar period. The sturdy and reliable M1917 soldiers on in Danish service, carried by the “Sirius Dog Sled Patrol”, providing protection for the arctic teams against polar bear attacks.

In the dark days of 1940, with many of their infantry weapons abandoned in France during the Dunkirk evacuation, the British were in desperate need of rifles. The potential for a German invasion loomed large and the need to equip every able-bodied Englishman was immediate.

Although neutral at that time, the United States acted swiftly to help, sending more than 700,000 M1917 rifles to England by the spring of 1941. By the end of 1944, the British would receive more than 1.1 million M1917s, representing a little more than 75 percent of the total provided to our Allies during the war.

The American Enfield rifles in England were painted with a wide red band on the stock to denote the difference between the U.S. .30-06 version and the British P14 chambered in .303.

These rifles were issued to the members of the British Home Guard, and the M1917 served as one of their primary weapons throughout the war. Although they were not used in combat by the English, the American M1917s freed up thousands of SMLE and P14 rifles for use by the British Army.

After more than twenty-five years of service, the M1917’s designation was finally changed from “Limited Standard” to “Obsolete” as World War II mercifully came to an end.

The American Enfield is not a glamorous or sexy rifle, but it is a hardy veteran of two world wars and a proud defender of freedom around the world. Armed with the knowledge of its proud history, keep an eye out for one at your next gun or militaria show.