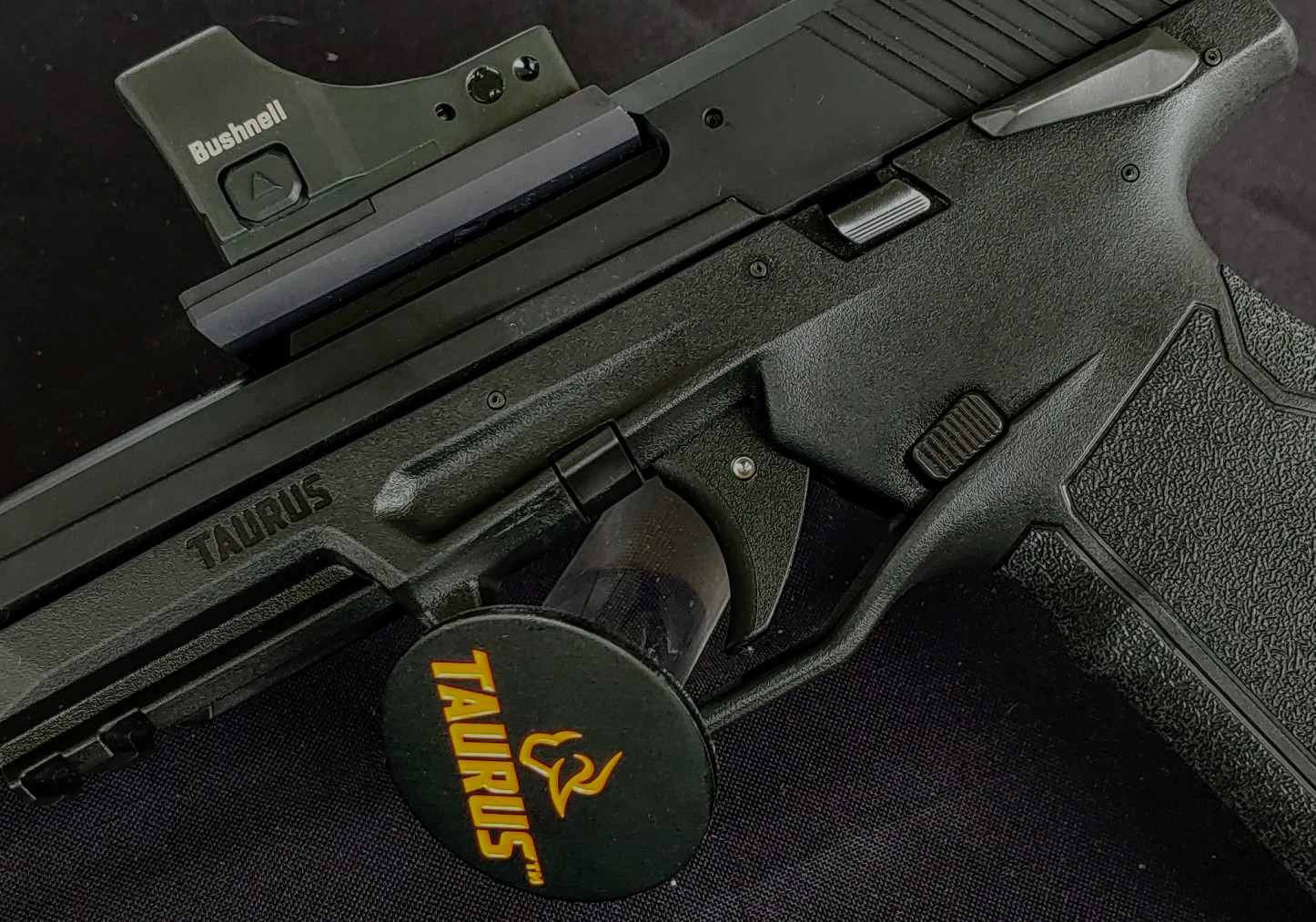 Taurus hit 2021 with a few new configurations of their more popular firearms. Among them were the Heritage Arms Barkeep, the G3 TORO series, and the Taurus TX22 Competition Ready – all shared with those of us who attended the Palmetto Gathering hosted by Sawmill Training.

What’s the Gathering? While SHOT Show was dead in the water, the folks at Palmetto State Armory decided to launch a little event they called the Gathering. The Gathering is an open-to-the-public event that brings together firearms companies, firearms media, and the everyday gun buyer to see firearms from various manufacturers, including SIG, Century, Rugged Suppressors, and the subject of today’s article, Taurus.

I recently went hands-on with all three at the Sawmill Training Complex range in Laurens, SC and spoke with the fine folks at Taurus for a little more info on these three handguns.

Heritage Firearms is a Taurus subsidiary focusing on 22 LR rimfire revolvers and rifles. Best known for their Rough Rider single action “cowboy-style” revolvers, they became part of the Taurus family back in 2012.

These affordable firearms are outstanding plinkers that bring the old west to modern times. I couldn’t imagine the number of young shooters who’ve started their shooting careers with Heritage Arms revolvers. The Rough Rider is the original model and comes in a wide variety of configurations that varying slightly in caliber, barrel length, and beyond. 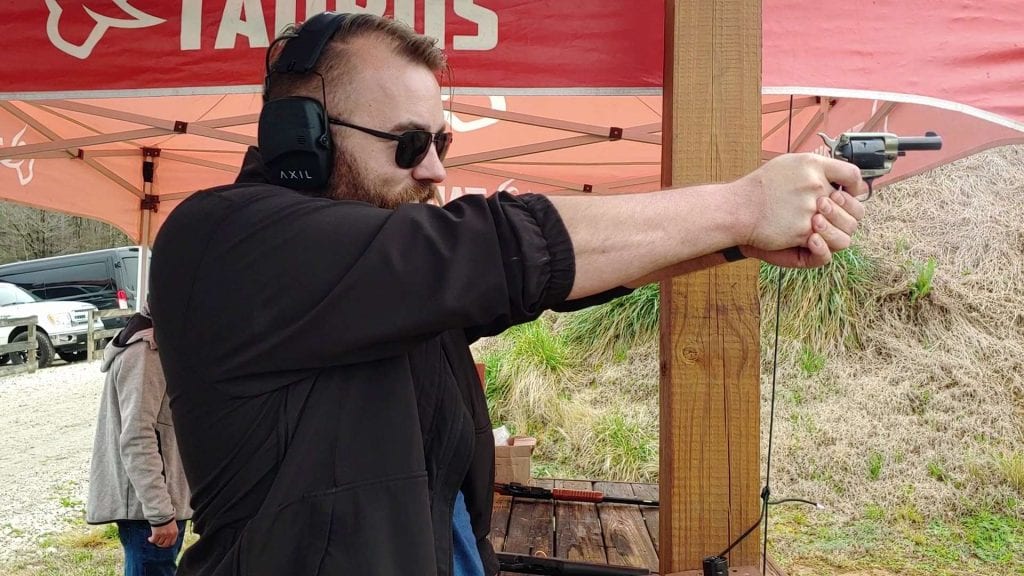 The little Heritage Arms Barkeep is a smaller cousin of the Rough Rider It kept a smile plastered across my face for round after round. I don’t know why I need one, but I know I want one.

The Barkeep uses the same action and style as the Roughrider, but the barrel is trimmed to a mere 2.86 inches. The frame remains roughly the same size as the Rough Rider, but rounded bird’s head grips can be added to trim the handle’s corners and size. I describe it as adorable, and adorable is the best term for a gun like this.

It’s so small and just plain cute that I knew I wanted one as soon as I saw it.

I was more than happy to take the Barkeep to the range and fire off a cylinder of six 22LRs. Like the Rough Rider, the Barkeep features interchangeable cylinders. You can swap the Barkeep’s 22 LR cylinder for a 22 Magnum variant for a little more oomph in your rimfire revolver. With such a short barrel and such rudimentary sights, you’d think accuracy would be the real challenge. The ranges at the Gathering featured a wide variety of steel targets.

Pleasantly surprised was the best way to describe my reaction when I hit the small steel hanging gong for 6 out of 6. A single-action trigger most certainly helps accuracy with the light and short trigger pull. The tiny blip of recoil generated by a 22 LR certainly won’t cause a flinch either. 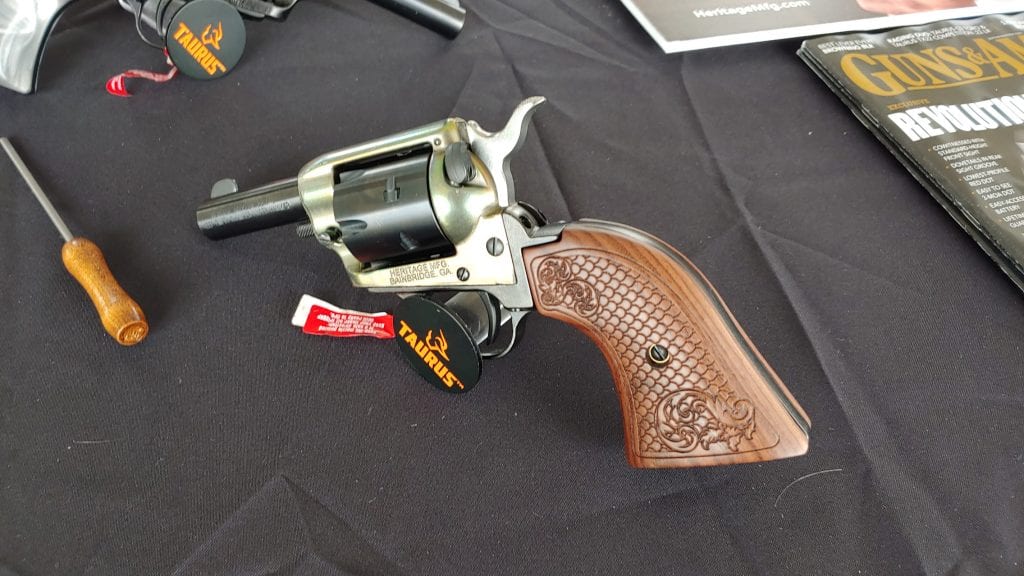 It’s not the size that matters, it’s what you do with it. Unless you’re Godzilla or King Hekaton, then it’s both. It may not be as contemporary a pistol as the Taurus TX22 Competition Ready, but just as fun to shoot – if not more so. Pretty sure I wasn’t the only visitor there at Sawmill Training that thought so.

Subcompact single-action revolver isn’t something I thought I’d ever need or want, but now that I’ve put one on through a few paces I can’t help but change my mind.

It’s so small it’s almost ridiculous, and when it comes to practical use, I admittedly have none.

It’s a small but fun gun that’s easy to handle and shoot. The accuracy surprised me and helped stroke my ego for sure. Sadly, the Gathering, like most media events (and most of us for that matter), had limited ammo, but I enjoyed my short time with the gun for sure. 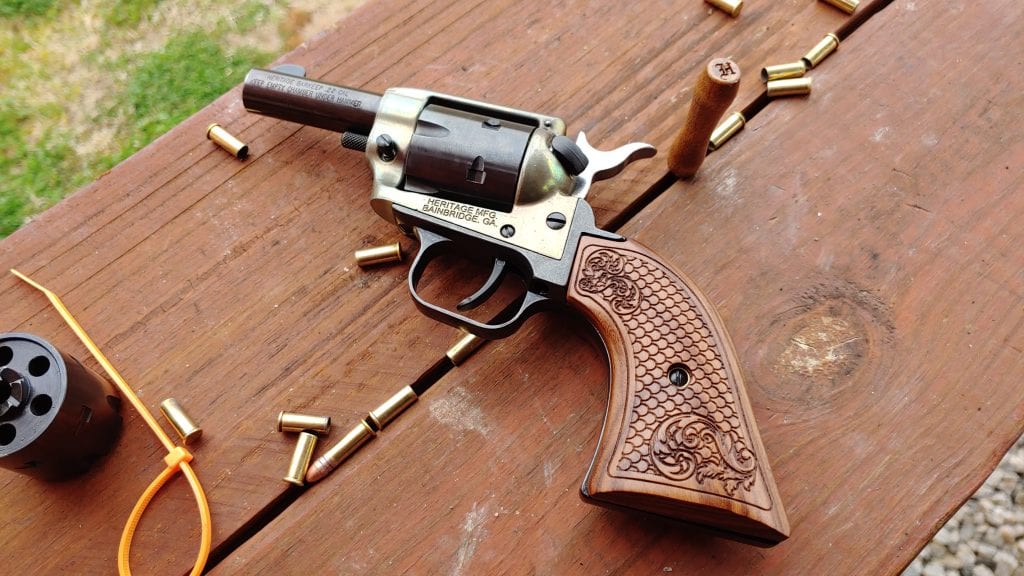 The big grips make the gun relatively easy to hold onto and aim. A set of bird’s heads would cut the size a bit if desired.

With such a short barrel, there is no room for an ejection rod. To load and unload the cylinder, you have to remove the cylinder and pop the rounds out by hand or with a punch rod. A slight shake of the cylinder dropped some empties and loosened the majority, so removing by hand was easy enough.

If you are looking for a fun but different six-gun, then the Heritage Arms Barkeep might be right up your alley.

When the loudest part of your shooting experience is the sound of the lead hitting the steel target, you know you are in for a good day. The original TX-22 from Taurus was a sleeper hit that provided a rimfire option that matched most modern 9mm handguns at a rock bottom price. Taurus followed it up this year with the TX-22 Competition Ready model. The Gathering premiered this new pistol, and it was the first of the new Taurus handguns I got to send some lead downrange with. 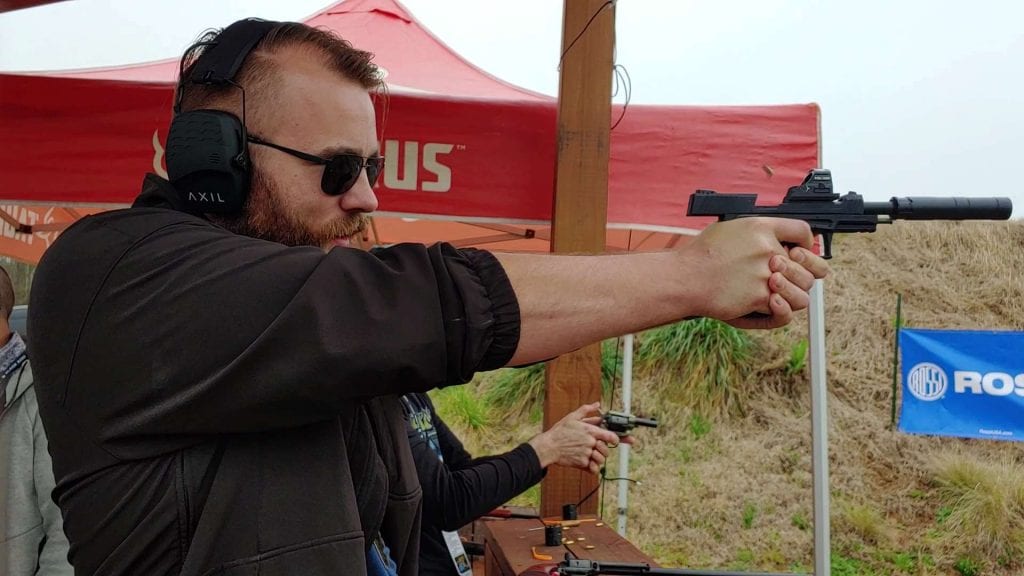 Taurus TX22 Competition Ready on the range at the Palmetto State Armory Gathering. This pistol is obviously a more contemporary design than the Heritage Barkeep, to include a

What makes the gun competition ready? Well, first off, it’s optics ready. Taurus utilizes a special plate system similar to the Glock MOS plates to accommodate nearly every optic on the market.

Next, they threaded the 5-inch barrel so a suppressor can be added. The TX22 Competition we shot was already equipped with a suppressor. It made the TX22 a real kitten to handle on the firing line.

It was superbly quiet, and the addition of an optic made the weapon quite precise and accurate. I didn’t just hit every small steel gong, but I did so with speed. The gun barely bucked or recoiled. Bushnell supplied the red dot, and it was more than enough to hit whatever target I wanted to hit. The trigger was surprisingly crisp and light. It felt like a refined striker-fired design.

I watched shooter after shooter handle the TX22 Competition Ready at the Gathering, and the gun never failed or faltered. It chewed through magazine after magazine of 22LR without fail. I’ve had numerous issues with Taurus firearms in the past, but the TX-22 Competition ready seems to be one of their better designs. The original Taurus TX22 received high marks across the industry, and the competition ready takes a few adjustments to accommodate the optics. 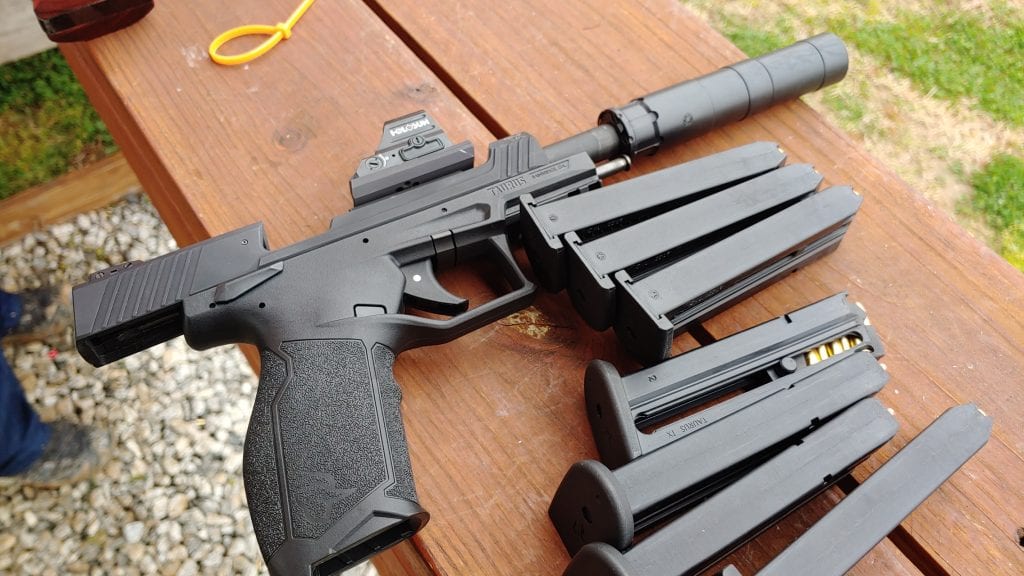 The Taurus TX22 Competition Ready trims some slide weight for a Beretta-like appearance.

Rimfire guns are picky when it comes to slide weight because they operate off of a blowback system. The TX22 Competition Ready is no different. The slight weight of an optic could cause reliability issues. As you can see, the slide is cut and trimmed, leaving an exposed barrel that gives off serious Beretta vibes.

Interestingly, the optic is located slightly farther forward than most for what I assume are balance issues.

The fine fellas at the Taurus booth at the Gathering explained the optic system work with a series of adapter plates. Each Taurus TX22 Competition ready would come with four plates to accommodate every popular mini red dot on the market.

On top of that, you get three sixteen-round magazines…or ten-rounders if you live in a less free state.

Taurus released the G3 and G3C not too long ago but has taken it back to the drawing board. Optics on handguns are becoming a norm, and Taurus recognizes this.

The G3 series are budget handguns that offer a lot of bang for your buck. I had a rather good experience with the G3C. TORO stands for Taurus Optic Ready Option and obviously is a clever reference to the whole Taurus bull theme. 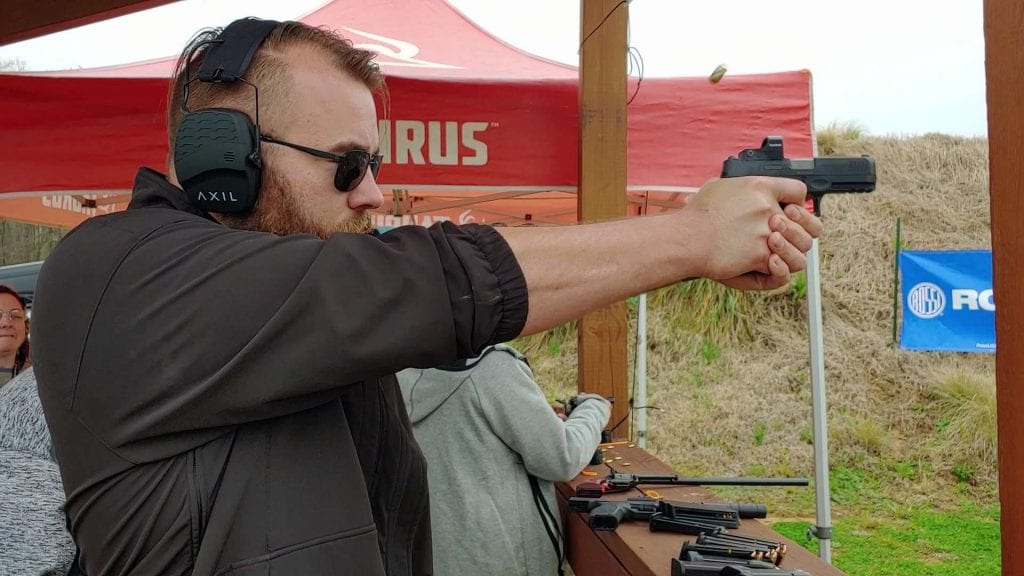 At the Taurus bay on the Sawmill Training range. Red dots are all the rage right, and the G3 TORO offers Taurus shooters a red dot plate system.

Both the G3 and G3C will get the TORO options, but the G3 was the only gun present at the Gathering. I got a little range time behind the G3 equipped with a Bushnell optic, as well as a Holosun 507C. As a more serious defensive pistol, the mounting system is quite critical. I asked and was not surprised to hear the toro system used an interchangeable plate system to accommodate a wide variety of optics.

What I first noticed was the optics seem to sit nice and low. Ride height seems lower than the Glock MOS series and nearly as low as a dedicated milling system. Predictably the optic made the gun easier to shoot. As an optic will do, the gun became easier to shoot accurately, easier to shoot with speed, and easier to hit small targets with speed.

Get your Taurus G3 and G3C Mags here – that’s what we do, after all.

I got these mitts, big ole hands, 2XL glove-sized hands. They don’t play well with Taurus pistols. From the G2S to G3C and G3, I get a healthy amount of slide bite to my firing hand. Other than that, my complaints remain deservedly unvoiced. 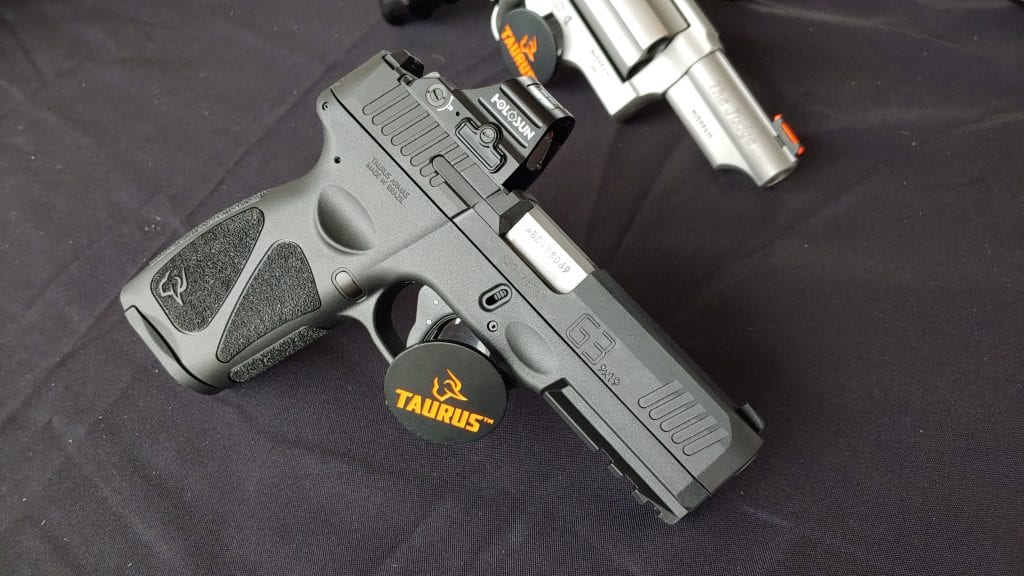 The Taurus G3 Toro uses SIG SAUER P226 magazines just in case you need to need to find extras and Taurus OEM mags are sold out.

The Gathering range had three man-sized targets with a separate gong in the center of each target. I played ring a ding ding dong with the three targets trying to transition from target to target with a hit on each gong. I was golden on the first two, but it took two shots to finish off the last steel man.

An optic really enhances your ability to transition and hit your targets — though if you’ve been reading The Mag Life for any length of time at all you already know that.

I predict a day coming soon when the vast majority of guns will just be manufactured and ship “optics ready”. (Not a difficult prediction to make.) Taurus is just one more domino to fall in the world of optic supremacy.

Maybe one day all the companies can agree on a singular footprint too. 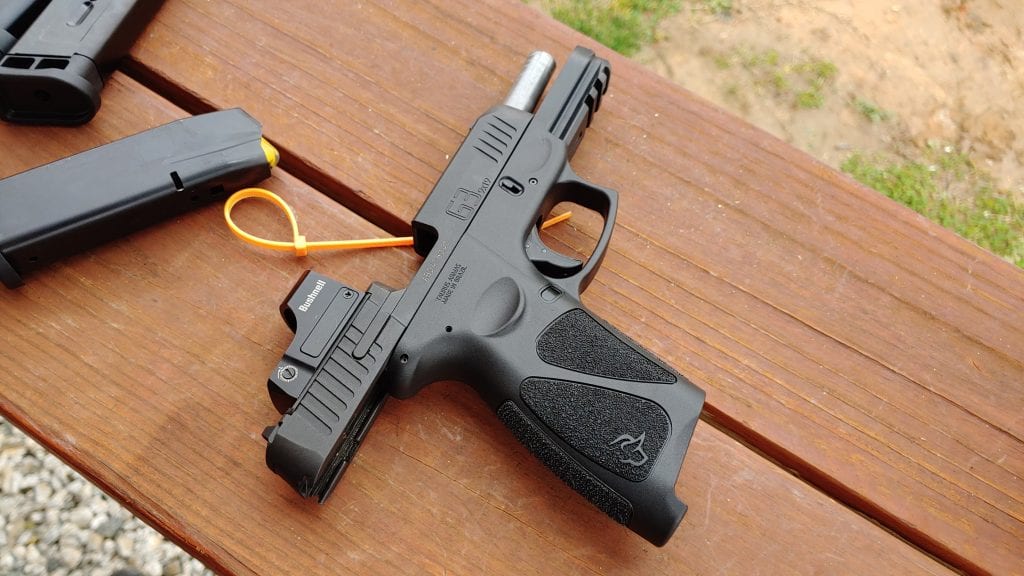 The TORO system can accommodate over a dozen different optics. Not sure you could fan the hammer like the Heritage Arms Barkeep though. (I didn’t actually fan it, but I totally would — though I’d do at home so as not get crosswise with the Sawmill Training RSOs.)

Palmetto Gathering – Will There Be More?

The Palmetto Gathering seems to be a rather successful little event. Small, but capable of growing. Plus, it’s on the east coast and available to not just media, firearms retailers, and industry pros, but to the everyday Joe and Jane who love guns. Sawmill Training has a great facility and were excellent hosts. If you’re in driving distance, that’s a range worth checking out.

Anyway, Taurus was just one vendor at the event, and if you made it to the Palmetto Gathering, which was your favorite?

Would you go next year? What’s your experience (if any) been like with Sawmill Training?

What do you think about that new version of the Taurus TX22? Would you “drag iron” with the Heritage Arms Barkeep? What your thoughts on the Taurus G3 TORO, or on red-dot-ready pistols in general?

Hit us with your thoughts in the comments below.

You can learn more about The Gathering online here.