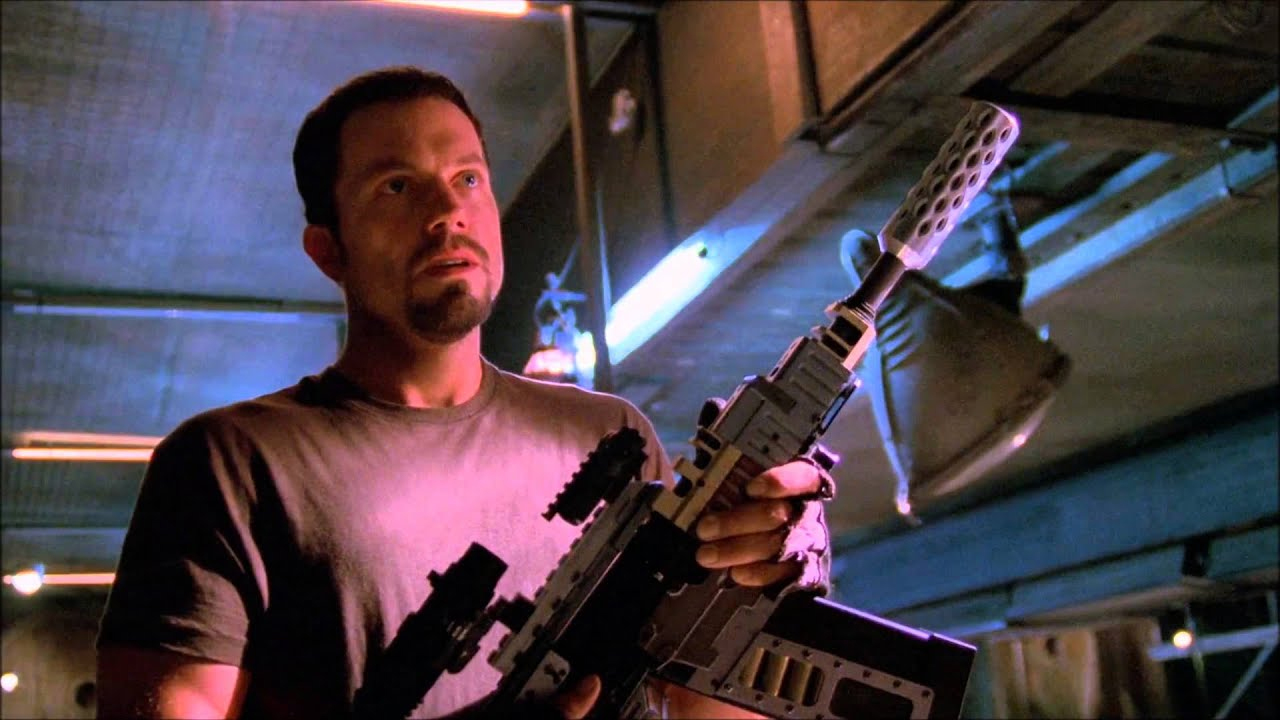 As a kid, I grew up in a home with a healthy stack of VHS tapes and very little supervision. Those tapes lead me to various sci-fi flicks and a lifelong love of sci-fi, science fantasy, and whatever other sub-genres exist. I’m also a gun nut, and those two things mix well. For this installment of Saturday Night at the Movies, I’m pointing out my favorite sci-fi guns, blasters, lasers, and beyond from science fiction movies and television.

Deckard, the android bounty hunter from Blade Runner, carries a unique weapon without an official name. Ridley Scott created one of the best sci-fi flicks ever created. While the blaster remained without a name, it most certainly stood out in the public’s imagination. It even makes a cameo in Fallout: New Vegas as “That Pistol.” 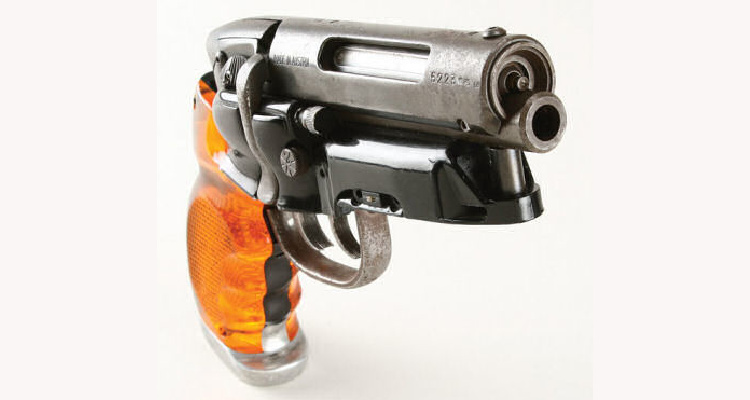 The iconic Blade Runner gun, Deckard’s blaster, is made from a Charter Revolver and a bolt action rifle.

In real life, the Blade Runner gun was built from a Charter Arms Bulldog with the bolt action and upper receiver of a Steyr .222 Model SL glued to the top of it. Then, the prop designer built a frame around the entire thing, added a second trigger and a sweet-looking pistol grip. It stands out in a movie that’s far from an action flick because the prop master was masterfully creative.

When you say sci-fi guns, I picture Han Solo blasting bad guys in his 1930s shooting pose. He’s wielding a DL 44 Heavy Blaster when he zaps a hole through Greedo. In Star Wars lore, this is a mighty blaster known for causing severe damage to whatever Storm Trooper is on the embarrassing end of it. In real life, the pistol has a unique look that the early Star Wars movies were known for. 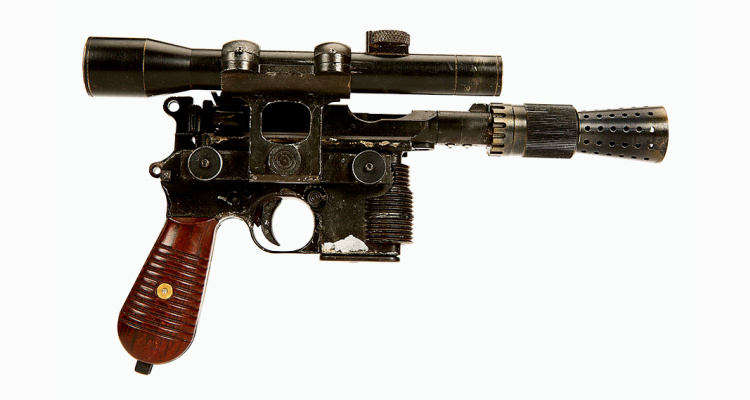 The reason being is that the DL 44 blaster is built around a Mauser C96 pistol that’s been given a serious facelift. The C96 was an early semi-automatic pistol called the ‘Broomhandle’ due to its unique grip. It doesn’t look like a typical handgun due to its odd grip, forward of the trigger magazine, and unique action. Star Wars added a scope, muzzle device, and some other small features to lend some personality.

Who knew Han Solo and Winston Churchill would be fond of the same pistol?

“Hokey religions and ancient weapons are no match for a good blaster at your side, kid.”

The Zorg ZF 1 Pod weapon is a gun most gun nuts, and sci-fi nerds would agree is both ridiculous and awesome. Developed by the fashionably challenged Jean-Baptiste Zorg in the far future, it had a number of lethal features (as several Mangalores learned to their dismay).

“It’s light. Handle’s adjustable for easy carrying, good for righties and lefties. Breaks down into four parts, undetectable by x-ray, ideal for quick, discreet interventions. A word on firepower. Titanium recharger, three thousand round clip with bursts of three to three hundred, and with the Replay button – another Zorg invention – it’s even easier.” 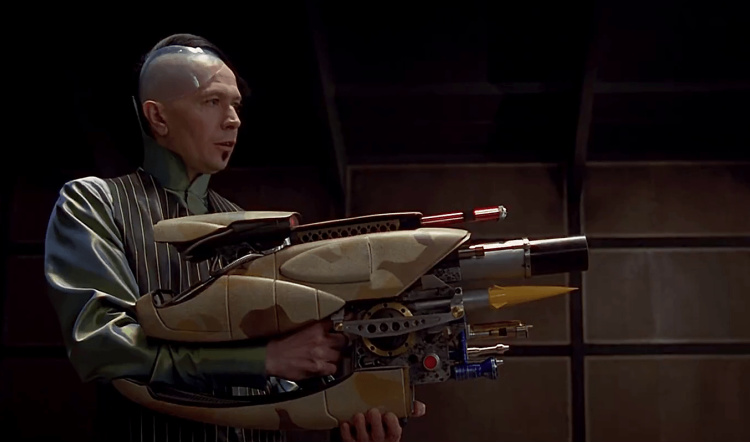 Gary Oldman might have had terrible taste in haircuts, but his taste in guns is impeccable. Who wouldn’t want a Zorg ZF 1 Pod Weapon System? (As long as you didn’t have to ruck with it.)

The Zorg ZF 1 was a multifunctional design that packed the following:

•Replay Button: The first round fired acts as a beacon for guided bullets.

This ambidextrous weapon is equipped with a 3,000 round ‘clip,’ lacks a stock, and seemingly has some optic on it. It’s both ridiculous and rather cool. For the flick portion, that was a ‘standard’ gun built around a full automatic AKS-74U. There were several different Zorg ZF 1 props built, one prop used for each function of the gun.

“I hate warriors, too narrow-minded. I’ll tell you what I do like though: a killer, a dyed-in-the-wool killer. Cold-blooded, clean, methodical, and thorough. Now a real killer, when he picked up the ZF-1, would’ve immediately asked about the little red button on the bottom of the gun.”

As a kid, I had open access to the VHS cabinet and was allowed to watch anything with ultra-violence. One of my favorite sci-fi flicks was Aliens (the second one, with Pvt. Vasquez and Pvt. Drake). The M56 Smartgun would later inspire me in my future career as a machine gunner in the Marine Corps.

As far as sci-fi guns go this is a practical one. The Aliens smart gun is made up of the gun itself, a head-mounted sight, a harness, and a stabilization arm. Though that M56 carry assembly might seem futuristic, the weapon beneath was anything but.

It’s a medium machine gun that can be used in close-quarters combat when needed. The sighting system allowed you to aim the weapon without shouldering it. The stabilization arm and harness allow for maximum control of the weapon and make it easy to maneuver. Operators can track targets and eliminate them with relative ease with a burst of 10x28mm caseless ammunition.

“I only need to know one thing: where they are.” 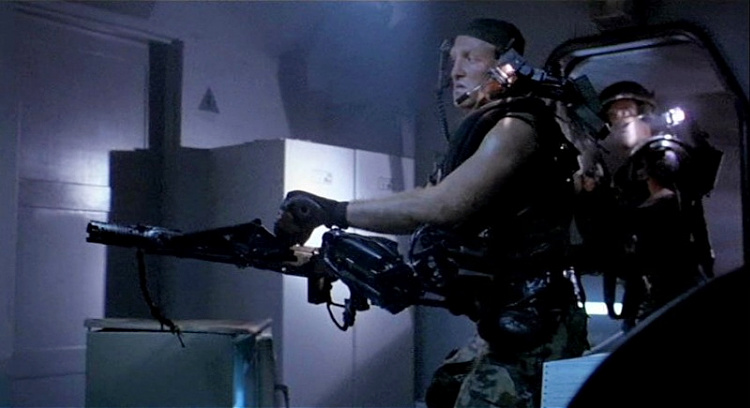 Machine gunners would love an actual Aliens smart gun. Ask me how I know.

The base of the M56 is an MG 42 with a wide array of attachments that include motorcycle and camera mounts, as well as some rather unique but useless attachments for that sci-fi edge.

Speaking of VHS tapes, one of my favorites was the Stallone Dredd movie. It was the perfect sci-fi flick for little kids who love gratuitous violence. Carl Urban absolutely ruled as Dredd in 2012, but it’s hard to beat the original. Regardless of your choice of movie, Judge Dredd’s gun has always been a costar. 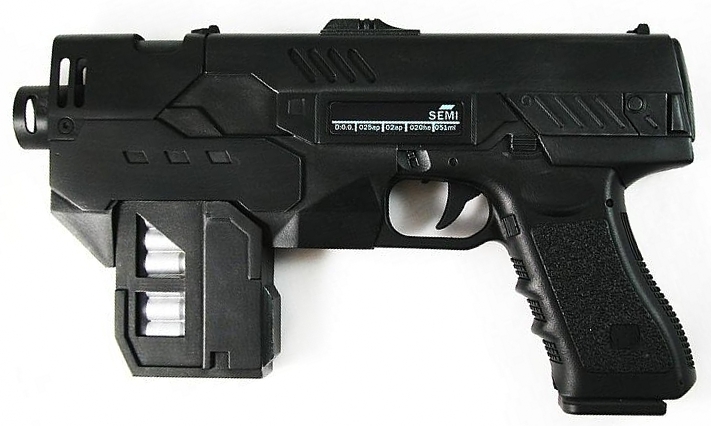 The 2012 Lawgiver Mk2 has a distinct Glock grip.

The Judge’s multipurpose pistol is a jack-of-all-trades weapon designed to deal with the hyper-violence the megacities experience. The Lawgiver MK2 will only fire for a Judge and is voice-controlled for its various modes. Throughout the two movies, we’ve seen the gunfire standard, fire fully automatic, armor-piercing, ricochet, incendiary, high-explosive, heat seeker, flares, grenades, and a silenced mode.

In Stallone’s Judge Dredd, armorers built a high tech Beretta 92Fs, In Dredd 2012, the propmasters built the Lawgiver from a Glock 17. The Lawgiver Mk2 was adorned with sci-fi encasements in both movies to give it a bulky futuristic appearance.

“Negotiation’s over. Sentence is death.”

Jayne Cobb of the Serenity Crew is an accomplished mercenary who acts as the crew’s muscle in the show Firefly. The show died an early death and deserved more seasons blah, blah, blah. This is about the guns, and Firefly has plenty to offer. The Callahan Full-Bore Autolock stands out the most to me.

Jayne described this bulky gun with all the affection and admiration it clearly deserves.

“Six men came to kill me one time. And the best of ’em carried this. It’s a Callahan full-bore auto-lock. Customized trigger, double cartridge thorough gauge. It is my very favorite gun… This is the best gun made by man. It has extreme sentimental value… I call her Vera.” 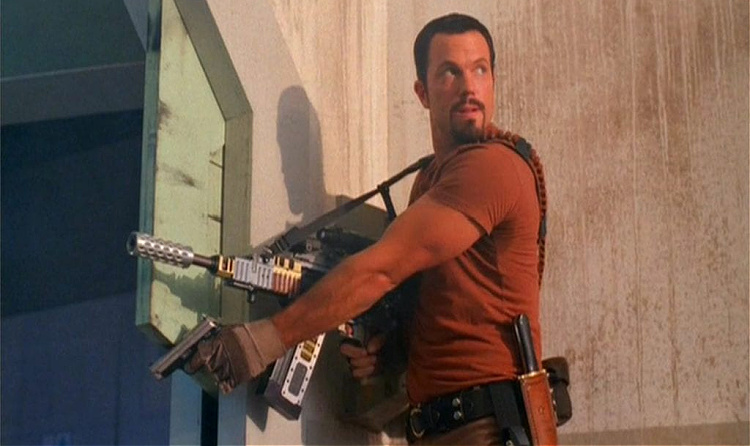 Any man named Jayne has to have a big gun.

In real life, propmasters customized a Saiga 12. It’s a fitting weapon for own man, but sadly we rarely see him use it. He even chooses a different rifle for dealing with crew upon a crew of Reavers. However, the Callahan Fullbore Autolock is undeniably cool.

Robocop is one more in my childhood stack of carnage-filled childhood VHS tapes. The Auto 9 was always so dang cool, and when you’re as big as Robocop, you need a gun that stands out. The “Robocop gun” was a massive machine pistol carried by a massive machine cop. Like the Lawgiver, this weapon could utilize multiple modes, and over the film series, we see:

“Come quietly, or there will be…trouble.” 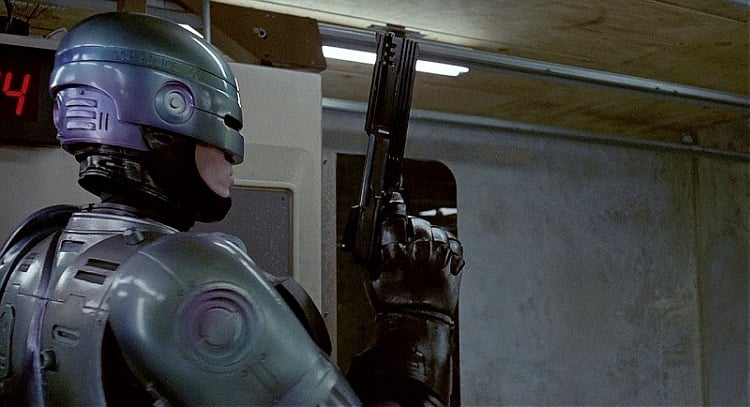 At the heart of the Robocop gun “Auto 9” is an actual Beretta 93R.

The weapon’s integrated into Robocop’s helmet, allowing him to fire from the hip accurately. We see numerous thugs brutally killed by the Auto 9 when used in just such a fashion. The Auto 9 packs 50 rounds of 9mm…somehow I guess. It never shows an extended magazine by any means.

In real life, the Auto 9 was built around a Beretta 93R—a machine pistol that saw more success as a movie prop than anything else.

I first saw this gun on the cover of a Foo Fighter’s album, and while I’m too young for Buck Rogers, the U-235 Atomic Pistol (not to be confused with the XZ-31 Rocket Pistol) is certainly worthy of this list. This atomic-powered pistol is a shining example of early sci-fi props. Before we went dark and gritty and realistic-but-fantastical, firearms like the U-235 existed. 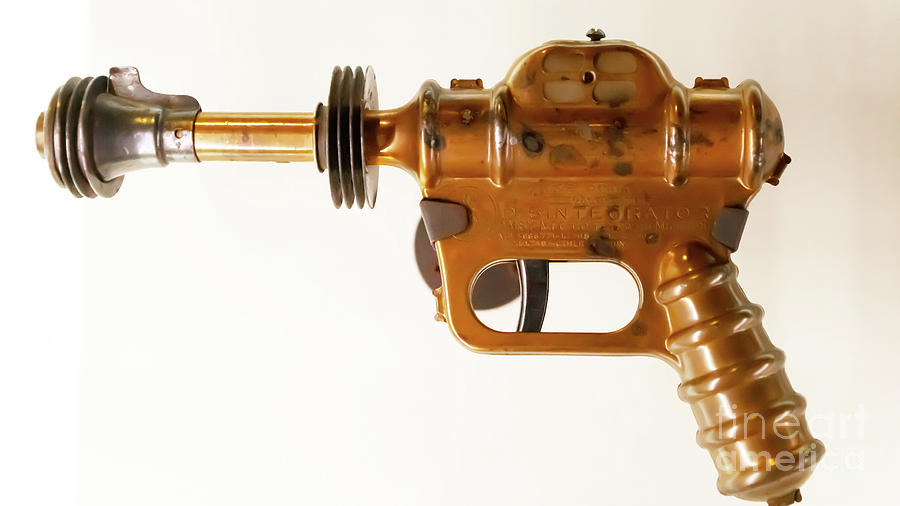 Buck Rogers didn’t mess around. Disintegration was always an option.

As an atomic pistol, the U-235 likely poisoned the user as much as the bad guy. The U235 features a fission rate indicator, muzzle blast deflector, atomic beam director, fission control governor, and converging target focus scope. A ‘neuron blast initiator’ fires the weapon and the gun feeds from a uranium concentrating magazine. This Sci-fi blaster is not inspired or built on any particular weapon and is a simple prop gun from the 25h century.

Finally, we have the famed Phaser. Star Trek is a beloved sci-fi series that expanded generationally. We see various Star Trek Phaser designs ranging from concealed carry models to standard handgun-sized blasters and even rifles. User switchable modes allow for stun, kill, and whatever else the plot needs. Phasers had various settings, including the kill setting, a disintegration setting, and a heat setting capable of cutting through walls.

The Star Trek phaser could be set to stun, or kill, or to cut through walls like a torch.

Depending on which generation of Star Trek you’re watching, the phasers look different and take various shapes and sizes. Like the Buck Rogers pistol, these are too clean and advanced to be based on a typical lead slinger. Denying the phaser’s influence on sci-fi films, books, and television is silly, and they’ve certainly carved a place inside of American culture. 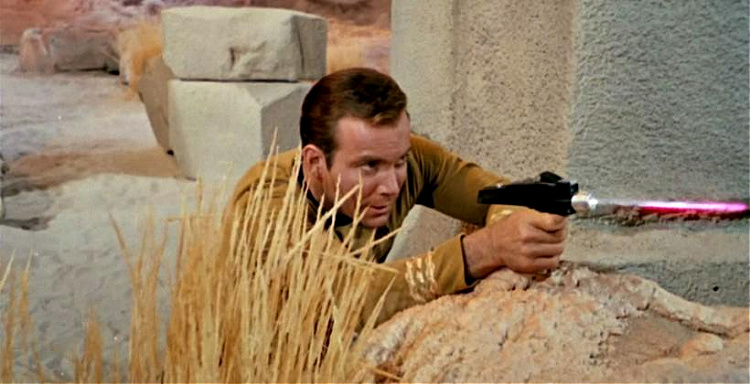 Science fiction often offers an interesting look at various interpretations of firearms. Some are seemingly practical with weapons like Jayne Cobb’s Vera and the M56 Smartgun; others, like the Zorg ZF-1, are completely impractical but ultimately charming in their design. This is my list, but it’s far from complete.

What sci-fi guns from film and tv did I miss? Give me some suggestions for new sci-fi flicks and let me know what guns to look out for.