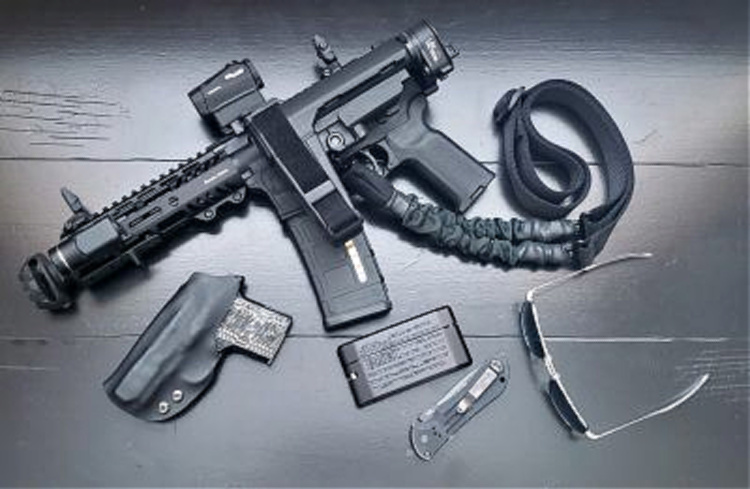 Any open discussion of AR pistols is going to cross a couple of pretty contentious lines. There’s very little about the design of an AR-15 in pistol form to distinguish it from the longer AR-15 rifle, except for its stock and the length of the barrel.

The science may get a bit nuanced as you shorten the AR-15’s barrel. Muzzle velocity is going to go down as you chop inches off the barrel. And some bullets may not stabilize as well in a shortened barrel. And—keeping the science theme simple—a short barrel requires a short gas system.

Other than that, though, most AR pistols are functionally similar to their rifle counterparts. Some of them are virtually identical, apart from the way they balance. They’re designed to be pistols, which typically means they have a pistol-shaped buffer tube (round, without the index holes common on rifle buffer tubes) on the back-end, but the manual of arms remains the same. 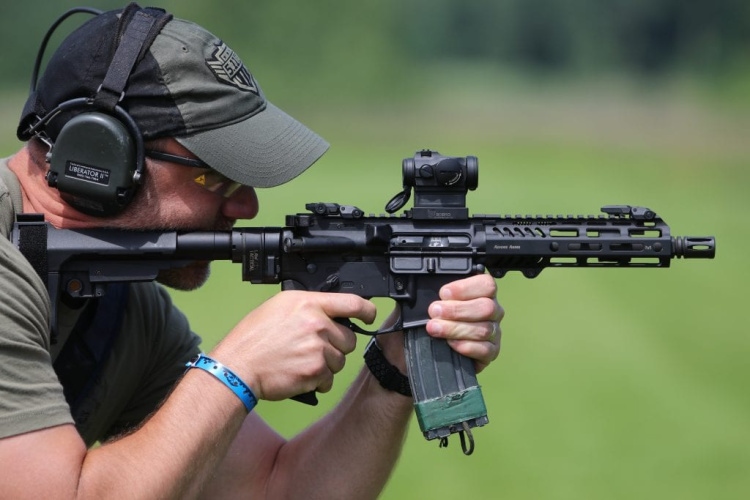 How you choose to use any object, like this Adams Arms pistol, is up to you. And I’m not talking about the gun, directly–though that’s a deeply contentious issue, too.

So what makes AR pistols so contentious?

Arm braces, for one. Before the explosion in popularity of “Sig braces,” as they were known when they first hit the scene, the AR pistol wasn’t very practical. The arm brace, in all of its permutations, changed that.

But I’m not talking about using the arm brace as an arm brace. You know what I mean. Any mention of the topic I’m currently talking about draws all of us ever closer to the dreaded demonization of all arm braces.

Lest you think I’m the type that might knuckle under to a slug, I’m not. I don’t believe there should be limitations on barrel length, much less opinions about what any of us choose to do with our arm braces.

What makes a pistol a pistol?

The first consideration is always barrel length. Anything under 16” is there in pistol territory. Or SBR territory. For it to be considered a pistol by the ATF, the gun has to be manufactured and serialized as a pistol. You can’t legally take a rifle, swap out the stock for a pistol brace, shorten the barrel and call it a pistol. That crosses lines for the ATF.

You can take a pistol and put a much longer barrel on it—but you can’t swap out the arm-brace for a stock. And you can add a hand-stop, but not a vertical fore-grip. 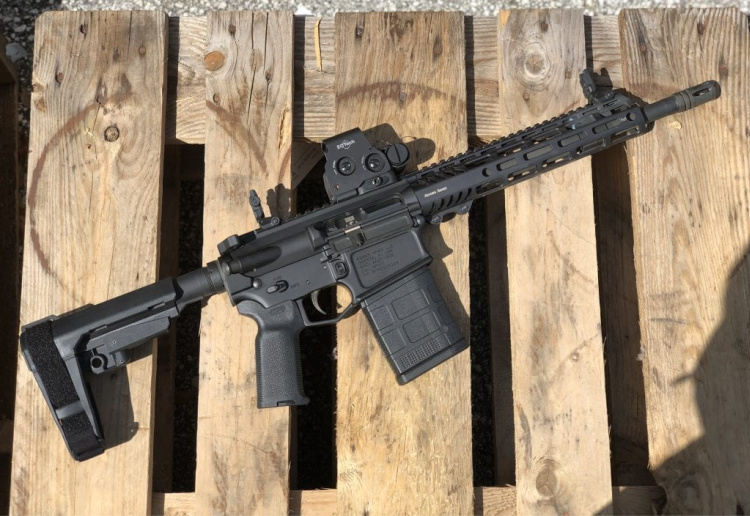 While I’m keeping this focused on 5.56, there are many other calibers available from most of these manufacturers.

This gets us to nomenclature. And here it gets hazy. There are rifles that are chambered for rounds more commonly fired from pistols. We call these pistol caliber carbines, usually—though there are also lever-actions and some other full-sized rifles, too.

And there are guns that are chambered for rounds more commonly found in traditional rifles, only without the traditional length and stock: AR pistols, AK pistols, and even some odd-ball bolt actions.

If you really want to chase some rabbits down holes, look at shotgun designations. There are shotguns, and short-barreled shotguns, and “firearms.” A firearm, in this parlance, is not a shotgun—at least not legally. It is like a pistol, sort of, that fires shotshells—but it has a shorter barrel, and no butt-stock, and meets a minimum length of 26”.

But I’m off track. Let’s find our way back.

I began by saying that the AR-15 (the rifle version) is almost identical to the AR pistol. As such, I look to the companies that make both. If you have a solid carbine, and the company makes a pistol version, you’d be safe in assuming that the pistol version would work well, too.

These are the companies I’ve had great success with. I’ve owned a rifle (or pistol)—at least one—built by all of the companies below. I’ve reviewed countless others. Each of these companies has a reputation in the industry.

This list is not in any preferential order, mind you.

Adams Arms does things a bit differently. They looked at the direct impingement set-up of the traditional AR-15 and built a robust piston system to take its place. The result is a gun that runs cleaner and cooler. They have a different sound to them. The piston is one of those meaningful changes that really put their guns in a different class.

Aero Precision is a one-stop-shop for the DIY builder.

Where do you turn when you want to build a gun from the ground up? My choice is Aero Precision. I currently have an Aero carbine that I put together myself and it is running like a champ. This is like Legos for adults—but a bit less expensive than most Lego sets these days. Aero is the place to go when you know what you want and can’t find it being made by anyone else.

BCM is another brand with a devoted following.

Bravo Company has a reputation for innovation. They are a small company, still, but have been making affordable, hard-use ARs for almost two decades. They rarely go in for the gimmickry some manufactures use to distinguish themselves and focus, instead, on functionality.

Daniel Defense built a reputation by making designer AR-15s in a slightly more affordable price range. Most of their guns have a cohesive aesthetic. They are well-built and appeal to those who want to add an optic and go.

LWRC’s ARs are known for their attention to detail and cohesive aesthetics.

The nicest AR I ever owned was an LWRC. It ran well and put rounds on target, but it also looked really nice. I swear it even smelled good–almost like curry.

LWRC goes the extra mile with fluting, finishes, and design. Their guns, though still modular, often have a refined aesthetic that gives them a distinctive look. You’ll pay for it, though. These guns are at the higher end of the production-gun scale.

Palmetto State Armory has blown up in the last few years.

The guns that PSA is making now are priced well and offer a solid place to start for those who want to take an off-the-shelf gun that’s perfectly functional as-is and refine it over time with new furniture and parts.

Another in the piston-driven AR line-up, PWS makes a really refined gun.

Primary Weapons Systems also makes piston guns. The PWS line is slick. They run exceptionally well suppressed. I’ve been beating the hell out of a PWS pistol for more than 5 years. It began life as a pistol and I liked it well enough to add a real stock and make it an SBR.

Springfield Armory was late to the AR game, but have made up for lost time with the Saint line.

Shortly before the 2016 election, Springfield Armory got into the AR-15 game. Their rifles are on-par with what you’d expect from a company that builds M1As and solid 1911s. The Saint rifles and pistols are priced competitively, but offer some solid upgrades. I’ve worked with several in the last year, and have no complaints.

If you want an off-the-shelf AR that has had most of the hard work done for you, the Saint is a solid choice. The SAINT Victor Pistol 5.56 runs $1,100.

Not quite an AR-15, but you can still see the family resemblance in this SIG Virtus.

SIG makes some more traditional AR-15s, but they’ve taken inspiration from the old stoner design and run in some pretty wild new directions. The gun above may look like the other AR pistols in this list to most Democrats, but it isn’t the same. There’s no buffer-tube on the Virtus. And it, too, is a piston-driven gun.

S & W has been making rifles for some time now, but they’re just getting into the AR pistols.

Smith & Wesson’s M&P15 line is a great entry-level AR. My local gun shop, back in the day, could get decent deals on these guns. They wouldn’t even bother unboxing them—they simply stacked them up on the floor with a clearly-visible price tag. They never lasted long. I’d love to know how many M&P15s are out there in the wild.

Smith only recently got into the AR pistol game. I’ve shot several M&P 15s, but not the pistols. These are new enough that I’ve not yet seen one in person. But the reputation of S&W, and the success of the rifles will be enough for many.

Finding an AR pistol available to buy may be a bit complicated these days. Look to the companies you trust to make rifles. That is always where I start. The compact size of these guns may mean that you need to really push them on reliability and test out accuracy, but it is worth it. With a good brace, these guns are exceptionally functional for home defense, as truck guns, and are ideal for suppression.

David Higginbotham is a writer and editor who specializes in everyday carry. David is a former backcountry guide in the Sangre de Cristo Mountains and Boundary Waters Canoe Area who was a college professor for 20 years. He ultimately left behind the academy for a more practical profession in the firearms industry and was (among other editorial positions) the Managing Editor for a nascent Mag Life blog. In that Higginbotham helped establish The Maglife’s tone and secure its early success. Though he went on to an even more practical firearms industry profession still, he continues to contribute articles and op-eds as time and life allow.