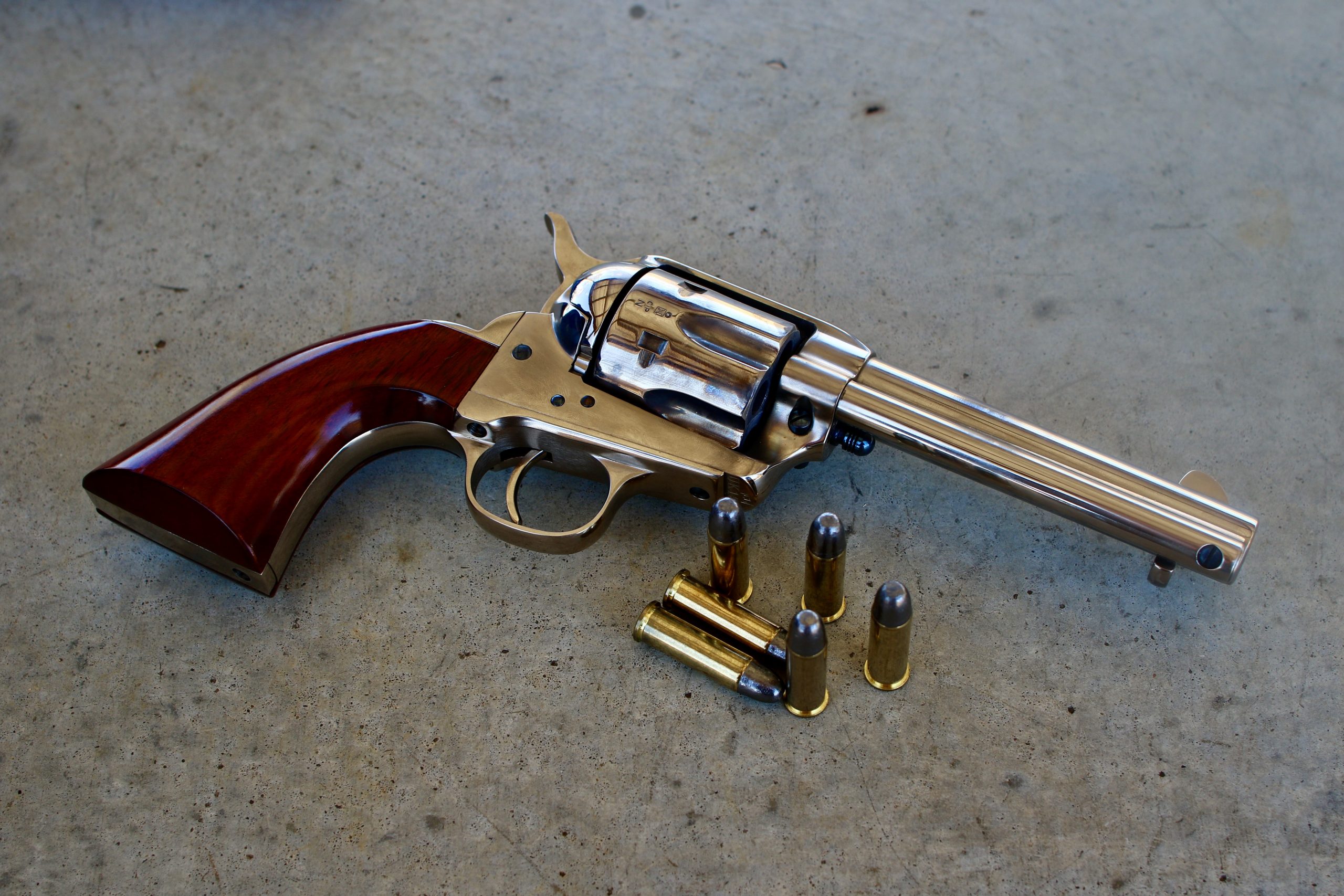 This is The Mag Life Blog—I get it. And this is a review of a gun that existed when the term “magazine” meant “a store for arms, ammunition, explosives, and provisions.” But there’s a certain appeal to the old Peacemaker, and the Taylors Firearms Gunfighter (Taylor’s & Company) is a solid example of the Colt 1873 pattern.

And, if you’ve made a trip down to the old brick-and-mortar gun shop in the last six months, I bet you’ll have noticed that the number of guns on the shelves has started to dwindle. Manufacturers are making guns as fast as they can. Those of us who are still training and shooting are running through ammo fast, and it doesn’t hurt to find guns that shoot calibers we still have on hand.  This old workhorse fits that bill—more on that below. 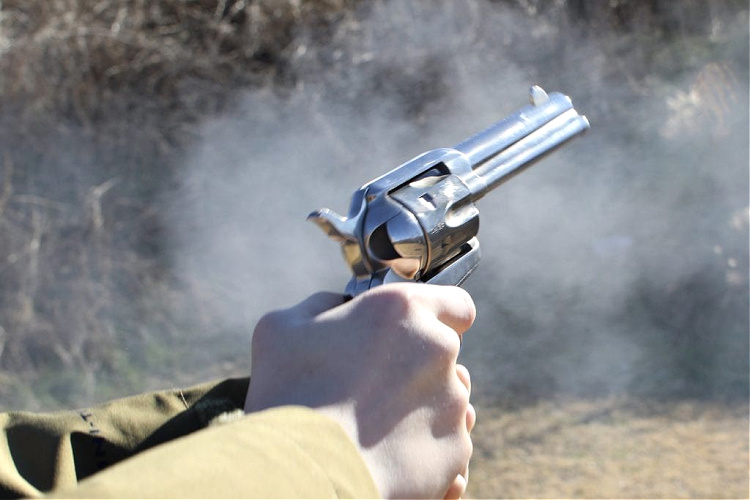 Taylor’s & Company have a complicated business model. They are not importers in the traditional sense. And they don’t make guns. Instead, they bring in guns from companies like Uberti and upgrade their parts and/or finishes. This allows Taylor’s to have exclusives, and the guns are popular with the historical enthusiasts and the cowboy action shooters, too. If you want a non-firing replica, go to Amazon. If you are looking for a finely-tuned classic that will stand up to the abuses of competition and regular use, check out Taylor’s. 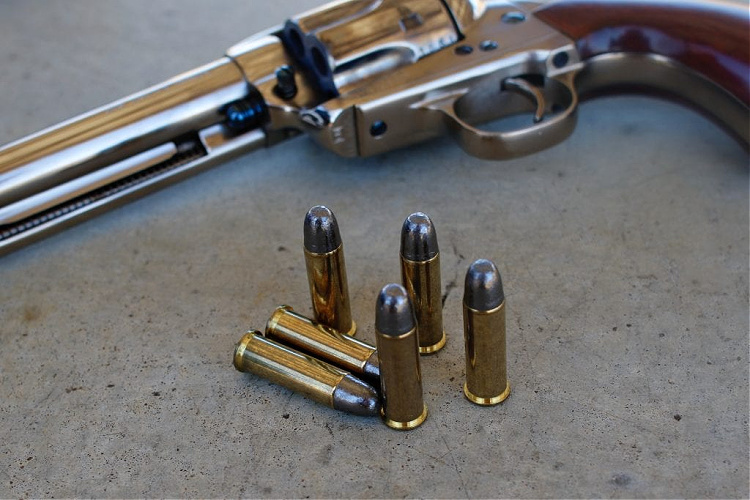 Reloads are slow, which is good for times like these. Have to make the ammo last, no?

This gun started life as a Uberti.

Now we’re getting really complicated. Uberti is an Italian company that makes classic American designs. They got their start when some notable westerns were filmed in Europe (Spain and Italy, mostly). The Italians were all wrapped up in the production of those films and it was easier to get tooling and gunsmiths in from America than it was to find enough old working guns, so they started building their own for use in the movies.

Film production waned, but the Italian love affair with old Colts and Winchesters continues. And now, in the most unusual twist in this story, almost all of the new-production 1873 copies and Winchester rifles—the old guns-that-won-the-west arsenal—are being imported back into the American market. If you want classic American authenticity, look to Italy.

It is, fundamentally, a six-shot 1873. Like many others, it has a 4.75” barrel (though versions are available with a 5.5” barrel). The cylinder is removable but doesn’t rock out like those on many contemporary revolvers, so all loading happens by pushing shells in and out through a loading gate on the right side of the gun.

This is a Uberti import that Taylor’s has added some features to. For one, it has a longer grip. The old Colts used the shorter grips of the Navy pattern revolvers on the 1873s. The Gunfighter has a larger grip—patterned after those on the larger 1860 Army.

The larger grip size compared to a typical 1873.

If you have big mitts, this may be a solid choice. The grip is just slightly wider at the base and slightly longer. Imagine continuing the line of an 1873’s grip down for a ¼” (maybe 5/16”). It isn’t much length, but the grip swell is noticeable in a side-by-side comparison.

Part of the satisfaction that comes from owning a gun like this is simply the joy that comes from imagining history. I don’t get that same expansive swelling feeling from many new polymer pocket pistols. But when I find a well-made 1873, I feel an almost childlike fascination. 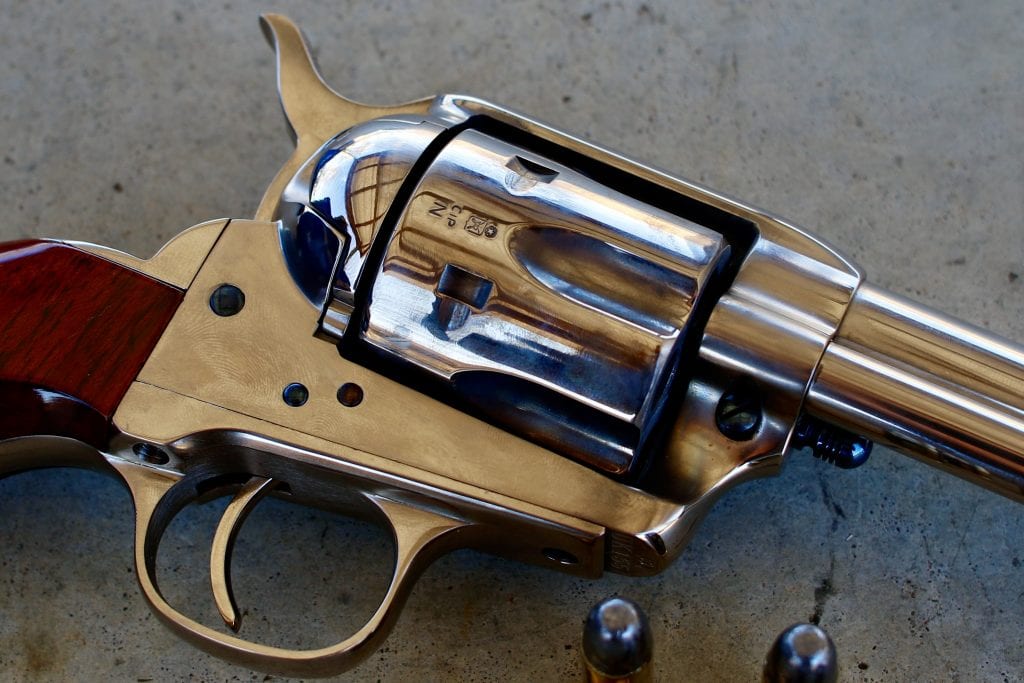 There’s a depth to the nickel that is more appealing than stainless.

The gun weighs in at 2.5 pounds. The clicks of the hammer and cylinder are pronounced. The trigger pull is clean and crisp, at just over four pounds. Taylor’s has tuned the springs and polished the action on this gun, and it shows.

Taylor’s is known for well-finished firearms. Uberti does their part, too. Uberti itself is in the mid-range of these imports. There are companies under them that cut corners. There are several companies that focus more on the finish, but what Uberti is doing now is really quite impressive.

The grips on this one are not exquisite. Its walnut is finished with a gloss finish, but they’re rather pedestrian. The nickel is accented well by nitre-blued small parts. The gem-like blue is like jewelry for the gun.

There’s a lot of steel in an 1873. And there are numerous ways it can be finished. This one is a nickel-plated steel. The nickel provides a hard, protective surface that also looks good. It is shiny—more so than stainless—and has a smoky tinge to it that keeps it from being bright like chrome. The nickel feels slick and polished.

If you don’t need a crash-course in single-actions, skip ahead. If not, here you go.

If you’re like many people under 40, you may not have ever fired a revolver. You may not have even fired a single-action. This is a big assumption, of course, but with so many new gun owners out there now, it isn’t uncommon. 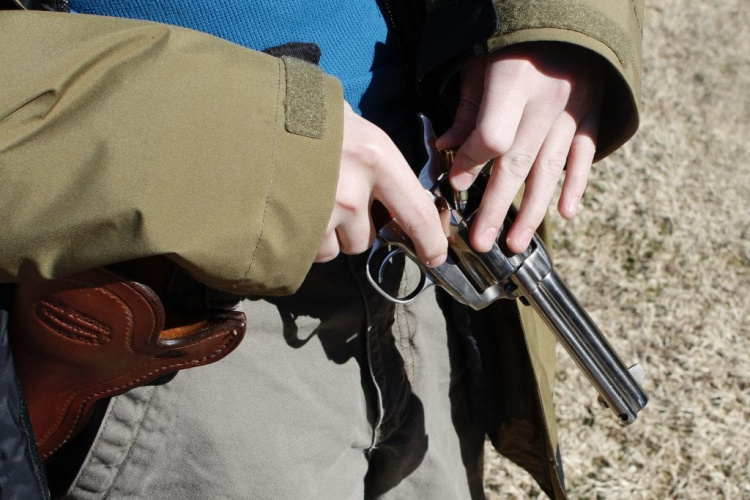 These old guns force you to slow down on the range. That’s useful as a teaching tool, too.

Cock the hammer all the way back. It will catch. Aim and squeeze. The hammer falls. The gun goes bang (hopefully). Then nothing. You will have to thumb back the hammer again on an 1873 in order to fire the next shot. 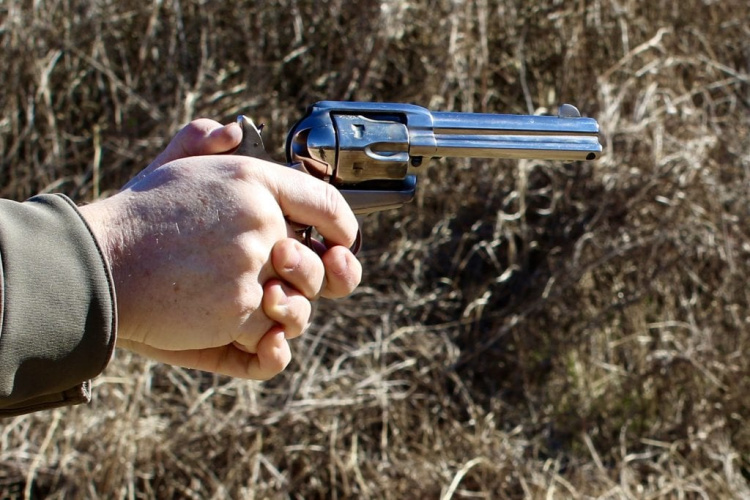 Cock with the support hand.

Some right-handed shooters will cock the gun with their right hand. I find that this breaks my grip strength and requires a bit too much fiddling. Instead, I cock with my left thumb while I hold the gun on target with my right. It is an awkward motion at first but works well.

Since there’s an undeniable Hollywood appeal to the 1873, you may be inclined to fan the hammer. To do this, you grip the snot out of the gun in the shoot-from-the-hip position and move the gun forward while you cock the hammer back with your palm. If I just slap the hammer back with the gun stationary, I find I push my point of aim down too much. 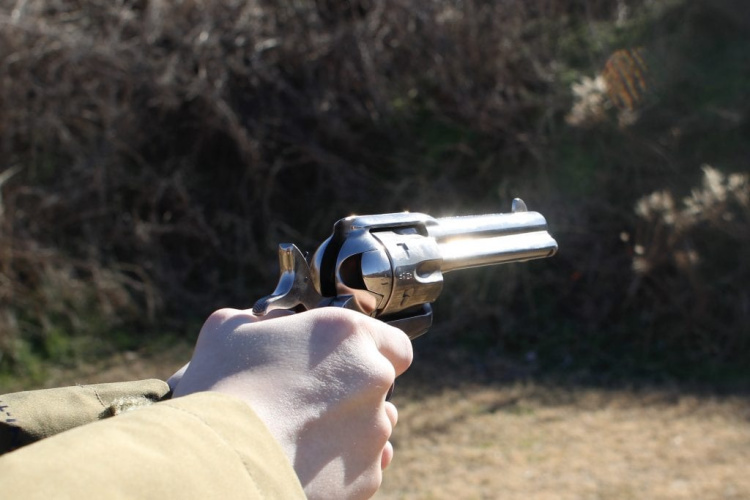 Note the sights. The front blade is tall. The rear is a milled groove.

Not that you’ll hit anything smaller than a barn with this technique, but everyone will likely try it at least once, just to see. The motion is violent and a bit abusive to the gun itself, so you may want to get a line on spare parts and make friends with a gunsmith before you bust up the gun.

Switching gears. I’ve got a 13-year-old boy who, no surprise, loves guns. He doesn’t love loud noises or recoil. A year ago, he would work with rifles and rimfires, but I was having trouble getting him past his fear of centerfire handguns.

I had a PPK in for review. The Walther PPK is a beast. It is heavy for a .380. It is also iconic, much like the 1873, and that was enough to pull in my son. He shot it and loved it. Even with the humble magazine capacity of the PPK, he chewed through about 1,000 rounds of .380 in a week of range trips.

After, he wanted something new. He still wouldn’t move on to 9mm, but he wanted something that was just as much fun on the range. We popped into the local FFL and he went right to the Taylor. “That’s a .45” I said. “It is going to kick a bit more than that PPK.” 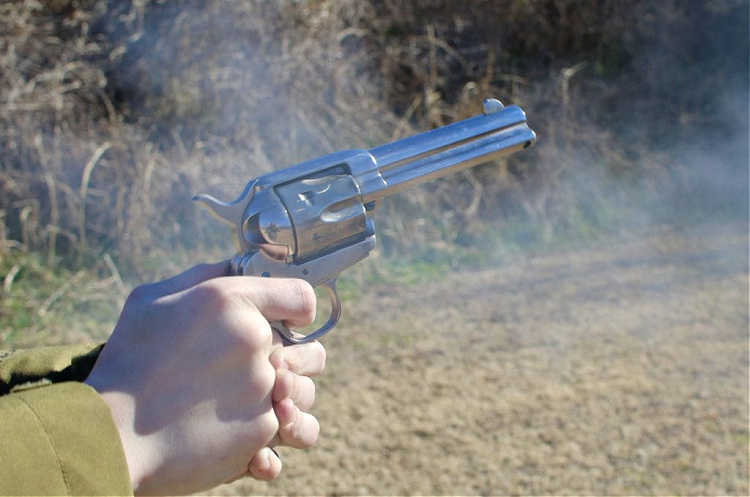 The Taylor’s, though, is a great teaching platform. The gun is heavy enough to tame some of the recoil. The design doesn’t really allow for great off-hand placement. As such, there’s still some muzzle-flip. It is a high barrel compared to many pistols, which doesn’t help. But it has been that way for 150 years. And if you can master this style of shooting, a contemporary pistol is going to be a breeze. 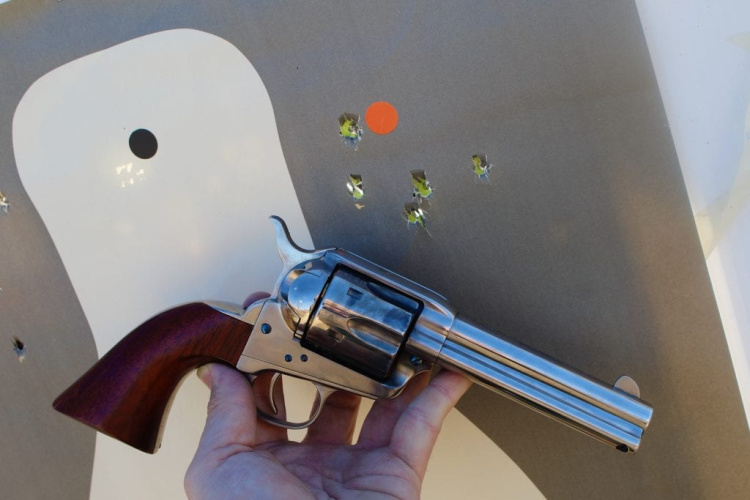 I shot this group from 25 yards.

The accuracy is on par with a 150-year-old platform, too. This is, I think, down to the sights. The big front blade is easy to see. The rear grooves are milled into the frame and only visible when the hammer is cocked. But the trigger pull is crisp and clean. All of these elements sound good. In practice, though, I can’t get one-hole groups. 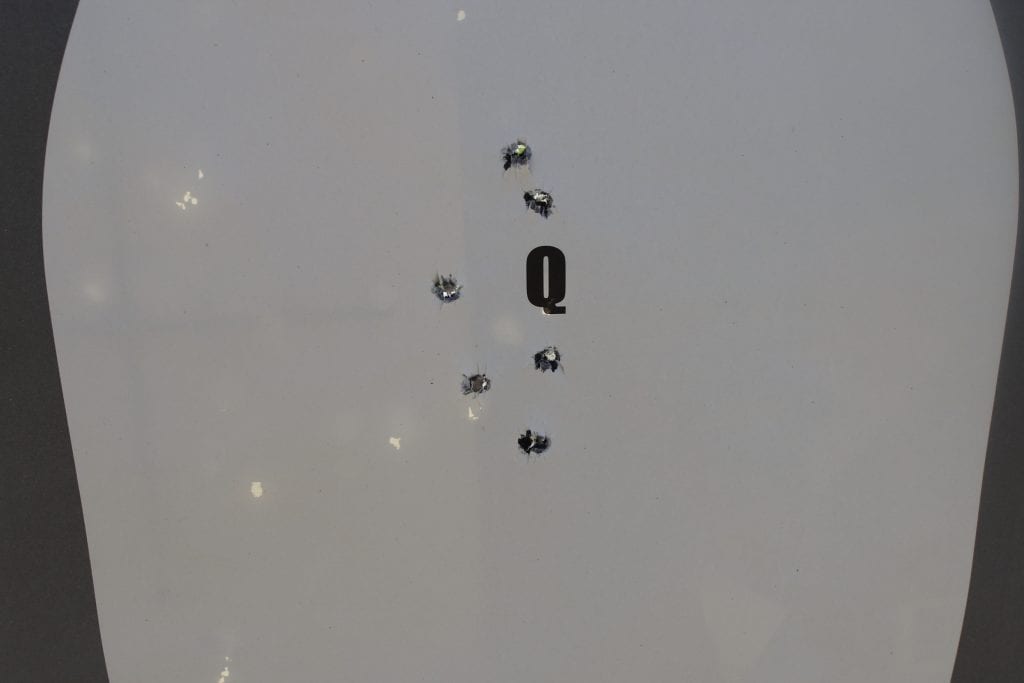 My son’s group from the same distance. He’s got the windage down.

From 25 yards, I can cover up a six-shot group with a playing card. And I can hit a 12” steel plate from 50 yards, reliably. And that’s enough for me. This isn’t a target pistol in the modern sense.

One logical answer to the “where does it fit in” question is in competition. Taylor’s guns are a staple at every SASS event. Since these are workhorses that are meant to be used, they provide an excellent platform. In their stock form, they work well. Taylor’s offers “Taylor Tuning” as an option on this, and many of their guns. Taylor Tuning is a process that happens in their Virginia facility, where they breakdown the guns, polish the internal parts, and replace the stock springs to ensure optimal performance. And SASS competitors, as they are wont to do, then add more modifications to make them fit their individual needs.

I am not a competitive shooter, but the old Peacemaker has an appeal. For me, it isn’t an EDC gun. I lived on the eastern front of the Sangre de Cristo range in New Mexico, though, and I saw the gun carried openly frequently. And these weren’t cowboy simulacrums—just ranchers. 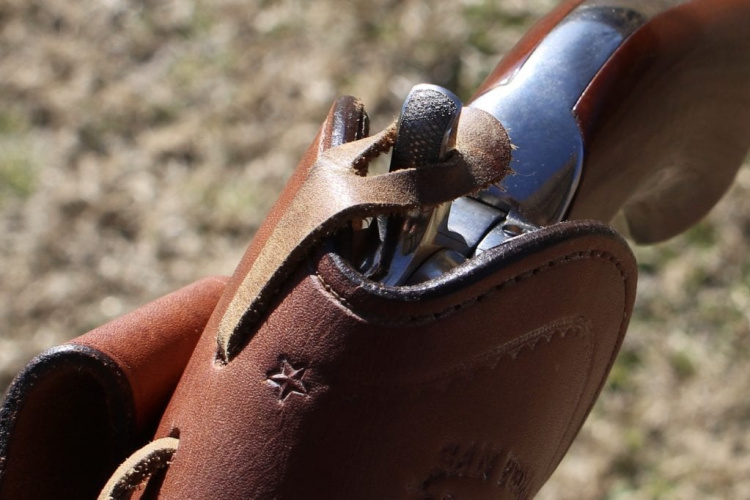 Could it be an EDC gun? Sure. There are still OWB holsters being made. And the .357 from a 4.75” barrel is an effective round, for sure. 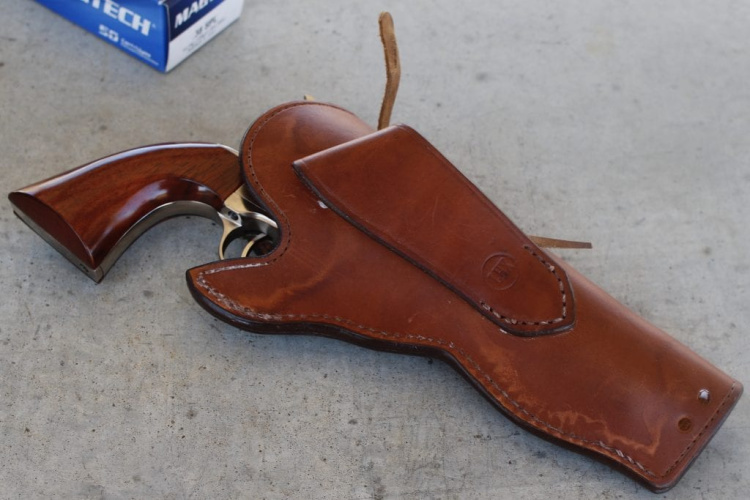 I’m perfectly comfortable owning guns that I only shoot at the range. And that, for me, is where I see this. With an ideal holster (and I’m still on the search for this), I’d carry it in the woods. My son carried it this past fall when we were hunting. 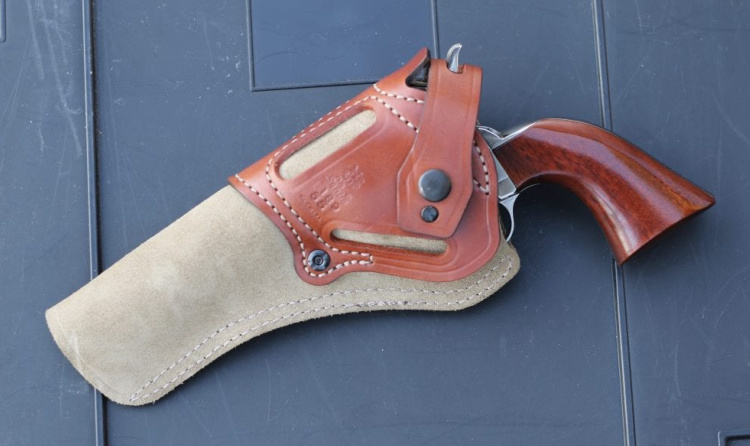 An 1873 holster from DeSantis, the Wild Hog. Much more retention.

Taylor’s shows a deep respect for the 1873 Army. This gun is an homage, and so much more. And it isn’t going to break the bank. I paid less than the $704.46 MSRP. If you’re into history, do it. If you are looking for a really fun range gun, or a good teaching tool, check them out.

David Higginbotham is a writer and editor who specializes in everyday carry. David is a former backcountry guide in the Sangre de Cristo Mountains and Boundary Waters Canoe Area who was a college professor for 20 years. He ultimately left behind the academy for a more practical profession in the firearms industry and was (among other editorial positions) the Managing Editor for a nascent Mag Life blog. In that Higginbotham helped establish The Maglife’s tone and secure its early success. Though he went on to an even more practical firearms industry profession still, he continues to contribute articles and op-eds as time and life allow.